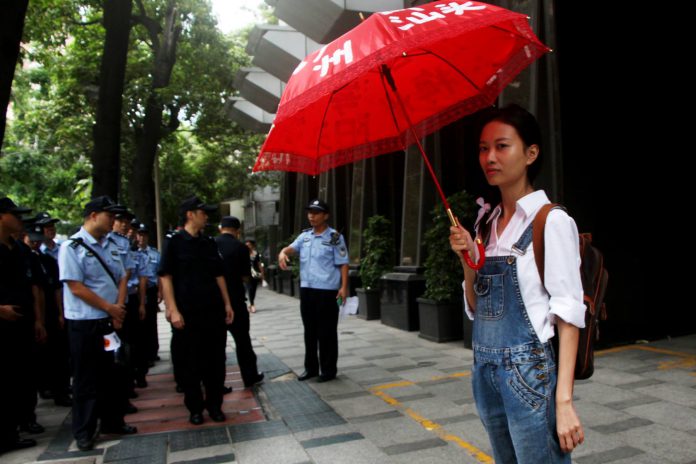 Dozens of international and local journalists gathered in May this year to celebrate and recognise achievements in human rights reporting at the annual Hong Kong Human Rights Press Awards ceremony. When the grand prize for Chinese News and Features was announced, an elegantly dressed young woman walked onto the stage to receive the prize for her story, “The Fate of Chinese Rights NGOs”.

“My stories are derived from others’ suffering,” she said.

Zhao, who has received three Human Rights Press Awards, has built her journalistic career on chronicling China’s human rights defenders and their suffering. But for her this is a calling, not a career choice.

She did not always plan to be a journalist. Zhao studied financial engineering at Nanjing University but she had a long-standing interest in journalism due to her daily exposure to Hong Kong television throughout her childhood. She was born and raised in Guangzhou and was greatly influenced by Hong Kong culture.

Zhao watched TVB every day throughout her youth and admired the journalists and broadcasters who were able to disseminate news and information to large audiences. When she was around 10 years old, Zhao began to notice the differences between the Hong Kong society she saw on the screen and the mainland society in which she lived.

By the time she entered her third year at university and had been on an exchange programme in Taiwan, the differences between mainland culture and the outside world had become even clearer to her. She had been approached to write for the now defunct iSun Affairs magazine after an editor noticed some articles she had written about the chopping down of Nanjing’s historic plane trees to make way for a new subway line in 2011.

In Taiwan, she began reporting on the 2012 presidential election for iSun Affairs, the Hong Kong-based politics weekly set up by émigré mainland journalists, while she was on a semester exchange. It was a door-opening and eye-opening experience and she even managed to interview the incumbent Ma Ying-jeou and attend an international press conference held by his challenger Tsai Ing-wen.

“I thought this society was miraculous. I, as a mainland student who had stumbled into political reporting and social observation, [found] people were welcoming me, opening doors for me,” says Zhao, who felt a kind of certainty and security she had never experienced before.