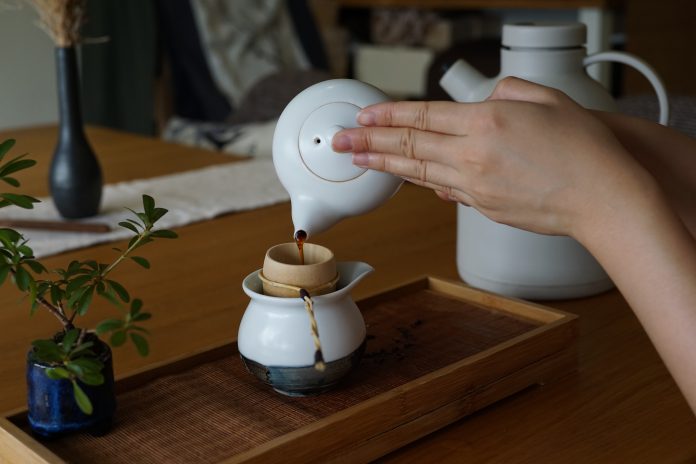 Mention Chinese tea, and many may think of the big, boiling pots of tea served with dim sum in traditional Chinese restaurants. Catherine Yung, who started Yú teahouse, is trying to change that old-fashioned image of Chinese tea. Located in a Fo Tan industrial building, Yú stands out with its modern décor and cross-cultural menu which offers Chinese tea alongside western desserts. The 27-year-old Yung hopes youngsters will come to appreciate traditional Chinese tea and hopes drinking tea can become a trend.

Yung’s mother works in the Chinese tea trading industry and Yung has been following her to tea plantations in Yunnan to collect tea leaves since she was 15. Her love for Chinese tea grew during her visits. She also discovered the health and mental benefits of drinking tea. With a desire to share her love of the beverage, she set up her own teahouse in 2015.

Inspired by the simple lifestyle of the people living on the tea plantations, Yung’s teahouse is designed in a minimalist style. The furniture is mostly made of wood. Unlike the traditionally patterned teapots and cups, the tea sets are plain, matching the tranquil atmosphere of the teahouse. Yung wants the teahouse to be a shelter for people to escape to from the hustle and bustle of the city.

Unlike traditional teahouses which only serve Chinese tea and Chinese snacks, Yú teahouse has Western desserts such as cheesecake and ice cream. While most Chinese restaurants only offer one type of Pu-erh, a variety of fermented tea, Yú has several on its menu, ranging from Red Mandarin Pu-erh to Chenpi (a sun-dried tangerine peel) Pu-erh. Tea leaves packed in wooden boxes are also available for sale.

“The teas served in Chinese restaurants are unvaried and the tastes are flat – it never changes,” says Yung. She says with good quality tea, you should be able to notice that the taste is different with each brew. For example, when you drink Chenpi Pu-erh, the earthy taste of Pu-erh dominates at first. After a few cups, the sweet taste from the Chenpi becomes more apparent.

Besides sharing basic knowledge of Chinese tea with her customers, Yung hopes they can be more appreciative when they drink a cup of tea because of the large amount of effort needed to make it; from planting, storing and transporting the leaves to brewing it just right. “Even the emperors back then couldn’t have tea as good as we do now, because the techniques and machinery we use now have been refined over all these years,” says Yung.

If you want to enjoy a relaxing cup of tea at Yú teahouse, please visit Workshop B, 14/F, Century Industrial Centre, No. 33-35 Au Pui Wan Street, Fo Tan. You can also search “Yú teahouse” on Facebook or Instagram for more details.