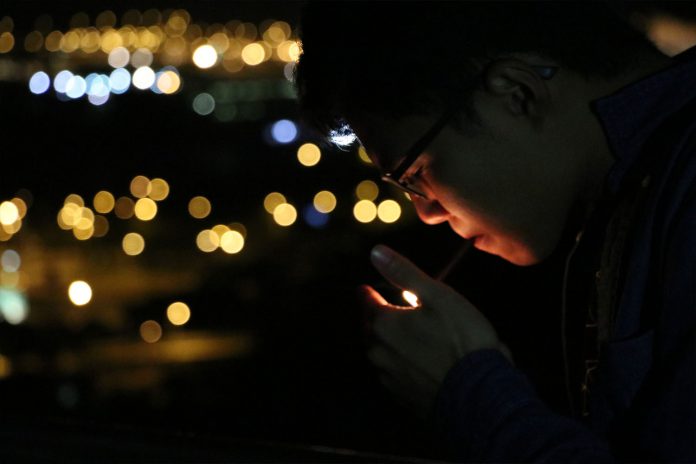 Matthew Kaufman, aged 31, was diagnosed with ulcerative colitis in 2001. He was prescribed many different medications and tried various treatments, none of which could alleviate his pain and discomfort. Ulcerative colitis is an autoimmune illness that affects the stomach and small intestines. Kaufman experienced severe internal bleeding which he says almost killed him.

“On top of all the pain and bleeding, I would constantly run to the bathroom all the time. I didn’t live a normal life. I basically lived in a bathroom,” recalls Kaufman.

But since a friend suggested he use marijuana as a last resort, Kaufman says his symptoms have completely subsided.  “It’s a miracle. I don’t use that word lightly. It’s been a gift.” Kaufman says.

Kaufman lives in Boston, Massachusetts where the medical use of marijuana, also known as cannabis, has been legal since January 2017. He hopes his experience and that of others like him will spur more scientific research into the medical effects of marijuana, and persuade more American states to allow its use for medical purposes.

In most regions, the field of medical marijuana research is more likely to be based on anecdotal evidence than scientific proof as it is still illegal and is classed by the United States Controlled Substances Act as a schedule-1 drug.

Even in states where the drug has been legalised, the medical effects of different types and doses of marijuana still lack the scientific proof that can help doctors prescribe the optimal formula and dosage. Often, it is up to patients to adopt a trial-and-error approach to figure out which, if any, cannabinoids help to relieve their symptoms.

The research that does exist seems to be mixed. According to a recent 400-page report published by the US National Academies of Science, Engineering, and Medicine, which analysed more than 10,000 scientific studies, of the hundreds of purported medical benefits of marijuana, only three are concretely supported. These are that it can help relieve chronic pain in adults, reduce nausea and vomiting in chemotherapy patients and relieve some symptoms of multiple sclerosis. There is also strong evidence to suggest marijuana use is associated with four purported risks: that it may worsen respiratory problems, increase the risk of motor vehicle accidents and low-birth weight in babies and that it can exacerbate schizophrenia and other psychoses.

Marijuana is mainly divided into three types, namely cannabis sativa, cannabis ruderalis and cannabis indica. Every marijuana plant contains cannabinoids – tetrahydrocannabinol (THC) and cannabidiol (CBD) with variance in level only. Both types of cannabinoids have medicinal value, with the difference being that THC is psychoactive while CBD is not.

In Hong Kong, marijuana is controlled as a dangerous drug under the Dangerous Drugs Ordinance (Cap. 134). That means the trafficking, supplying, manufacturing, possessing or consuming of cannabis is illegal.

However, some people in Hong Kong are using cannabis for medical purposes. Lee Siu-ming (not his real name), has been suffering from chronic depression and post-traumatic stress disorder (PTSD) since 2001.

Lee says he was taking drugs including marijuana, ketamine, ice and ecstasy and got into trouble for his behaviour when he was at school in Hong Kong. This resulted in his being sent to the controversial Elan School in the United States to undergo a behaviour modification programme.

“You have to shout at everyone and the students they would play with your time and they would bully you. They cooperate together to make you worth nothing. It’s like you’re
spiritually broken inside,” Lee recalls of his experience at the school, which he says ruined his life. The school was closed down in 2011.

After quitting the programme, Lee suffered from mental illness and was sent to a hospital in the US. After a couple of months he came back to Hong Kong and his condition
worsened, such that he would not leave his home and refused to see anyone. All he could do was try to forget the dreadful memories with the help of cigarettes and computer games.

He has been taking anti-depressants for 16 years now, but he stressed that he only takes pills when his symptoms are obvious as they numb his body and his mind.

“Sometimes the medication itself will distract your concentration, will make you dull and make you sleepy every day. And it’s not good; we should be feeling energetic,” says Lee.

One day Lee discovered marijuana could help ease his symptoms. “You  feel your surroundings are very relaxing. You  feel no pain. You  feel all the pain is gone,” says Lee. “When your brain fluctuates, and when your brain is overheated, then you need something to balance your brain and calm yourself.”

The founder of the Facebook page ‘420HK’, who goes by the name of Jacky Kief is committed to changing what he says is the Hong Kong public’s misconceptions about marijuana. As an advocate of the legalisation of marijuana, Kief says the drug should be distinguished from synthetically produced psychoactive substances because it is a natural herb. And he accuses the media and the government of scare-mongering by lumping it in with addictive synthetic drugs.

Despite his efforts, Kief thinks awareness of the relative safety and the purported benefits of marijuana are still low.  He says there are too many other issues competing for people’s attention in Hong Kong and, even if they are concerned about the issue, many people are afraid to like his Facebook page for fear of being suspected of using marijuana.

In the meantime, he says many Hong Kong people suffering from mental disorders have contacted him to ask for further information on using marijuana to treat their illnesses.

“Hong Kong is just lagging far behind other countries in the world as many of them have at least legalised the use of marijuana in the medical field and are debating recreational use,” says Kief.

However, psychiatrist Tsang Fan-kwong, is vehemently opposed to the use of marijuana for medical purposes.

“Medicine is science, based on scientific data. When there are other medications that are more effective, why use cannabis?” says Tsang.

Tsang says there are no grounds for doctors to prescribe marijuana in Hong Kong either medically or legally. “There is no benefit actually if you consider the risk and benefit. The risk is much greater than the benefit so it should not be called some benefit.”

Some experts have pointed out that even in the areas where there is strong evidence that marijuana is beneficial, newer generations of legal drugs have also been shown to be at least as effective, and with fewer side effects than older medicines.

Also, Tsang is afraid that more people will be diagnosed with drug-induced psychosis if medical marijuana is legalised.

“This may bring about a big change in the drug scene in Hong Kong in which more and more people may try cannabis. And more people trying means that possible complications arising from taking cannabis may increase,” says Tsang.