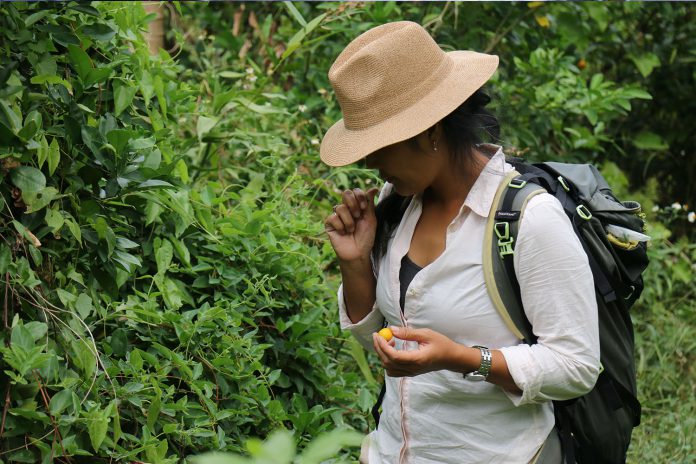 Every week, Sandy Wu Kwai-mui makes her way to some wasteland near where she lives in Tung Chung to look for wild plants known as Chinese fever vine (Paederia foetida). She takes the leafy climber plants back to New Century Soybean Food, a traditional Hakka food store, where she juices the leaves and combines the dark green liquid with Chinese sugar syrup before kneading the mixture into rice flour. She forms little balls with the dough and steams them to make hundreds of traditional Hakka rice cakes.

The 54-year-old has been foraging for the key ingredient for these traditional snacks since she opened her Hakka food shop 14 years ago. Chinese fever vine, which grows wild year-round, is one of the most common plants in Hong Kong. It is used in traditional Chinese medicine (TCM) to treat rheumatism, arthritis and asthma among other conditions. According to TCM lore, it is also believed to eliminate damp and clear toxins from the body. Households also use it with other ingredients to make soup.

Wu sees no problem with foraging. After all, she says, humans are just part of the food chain. “The government would just clear those wild plants as ‘weeds’ regularly, but I usually go up on the mountains and look for these ‘treasures’ for making rice cakes, which is just another form of clearing action.”

She says the areas where she forages are far away from the normal walking paths and rarely have any foot traffic. She always wears shirts with long sleeves and long trousers to protect herself from wild insects, snakes and mosquitos. “Once I even fell accidentally into a deep pond because it was covered with weeds and wasn’t very visible. And I was really afraid as there might be snakes inside,” she recalls.

But she says stubborn persistence is part of the Hakka character and she insists on carrying on despite the slim margins on selling the rice cakes compared with the effort she has to make.

“I had stopped [making them] for a while but people would just come by and ask for this food, and I want them to remember their childhood days,” she explains.

In a written reply, the Agriculture, Fisheries and Conservation Department (AFCD) says it is illegal to cut, pick or uproot any plant or part of a plant, whether living or dead, from within a country park area without express permission under the Country Parks and Special Areas Regulations (Cap 208A). The maximum punishment for violating the regulation, which also bars hunting and trapping animals, is a maximum fine of $2,000 and imprisonment for three months. The department says there were 79 relevant prosecution cases over the past five years.

Stony Ng Leung-kwai, a wild plants guide, usually holds foraging activities near organic farms to avoid legal problems. He says it is also safer to forage in the farmed areas rather than in untended areas.

Ng thinks Hong Kong provides rich pickings for foragers because of its high biodiversity. The territory lies in the subtropical zone which means it has both evergreen and broadleaf deciduous trees and provides ideal conditions for both tropical plants and plants that grow in colder climates. Apart from collecting wild plants for food, he says people also forage for a wide range of medicinal plants to use in Chinese medicine or dietary therapy.

The local herbal medicinal tea, 24 flavours, is just one example of how rich Hong Kong is in wild herbs and plants since it has so many herbal ingredients, he says.

Although wild plants are more natural and possibly more beneficial to health in that they do not contain pesticides, Ng points out there are risks involved in consuming foraged food.

“Especially for people living in modern cities, they might not be used to foraged food as the wild plants are sometimes hard to digest and could even hurt their stomachs,” he says.

What is more, Ng warns, some plant species in Hong Kong are poisonous and some of these poisonous plants may resemble other non-poisonous species to the untrained eye. Ng cites as an example the Campanula Orchid which is a plant villagers use to kill rats. Poisonous plants can pollute the flora, soil and fruits around them.

Wanda Huang is an experienced forager who knows how to identify edible and medicinal plants. She grew up in Canada and moved to Hong Kong for work. Huang tries to avoid processed and synthetic products as much as possible and incorporates foraged food and materials into her daily life. For instance, she makes her own wine and shampoos.

Huang’s interest in foraging started in childhood when her father took her on outings and taught her how to identify herbs and plants in the wild. “We picked blueberries and made pancakes for breakfast, we made tea from pine needles and pine cones. and then we cut the pine cones for the nuts. It was just for me such a fun experience growing up,” she says fondly.

“And we don’t have to spend time to farm like farmers who constantly plough the land and sow seeds. Foraging happens naturally so you think back to when humans were hunters and gatherers,” Huang says.

She adds that the vegetables we cultivate today originated from wild plants, and that the original strains have long roots that penetrate deep into the soil. She adds this means they contain more nutrients and trace minerals.

Huang says that over time, the cultivation and domestication process meant breeding bigger, sweeter and faster growing vegetables. The roots eventually shortened, as did the ability for these plants to live without frequent watering and fertilizing, along with their ability to absorb the trace minerals and nutrients deep in the soil. She adds this is why it is healthier to eat wild plants than store-bought vegetables.

Huang holds workshops with A-Team Edventures, an educational programmes provider in Hong Kong with an environmental focus. However, she notes that most of the participants in the workshops are expatriates and chefs from high-end restaurants. Only around a tenth of them are local people.

“So there is real interest from the expat community in Hong Kong and [they’re] fascinated about what is edible around them,” Huang says. “They were just amazed, like ‘we didn’t realise there is so much in Hong Kong we can eat’.”

Huang also forages to sell ingredients to high-end restaurants. Uwe Opocensky, the chef- owner of the restaurant Uwe in Sheung Wan, participated in one of Huang’s workshops and now buys foraged food from her. He says foraged food is sustainable and diners find it interesting.

“The taste is much deeper, and the species are very different because they have to grow in a natural environment and the flavour is really related to the place where they grow.”

Opocensky wants to cook with seasonal and locally sourced ingredients and he goes table to table explaining where the ingredients come from. The ratio of foraged ingredients to farmed ones depends on the time of year. He says that during the peak season in February, when foraged plants are most abundant, around 40 per cent of the herbal ingredients are gathered in the countryside. The harvest depends on the season. Now in the early winter months, for instance, it will include wild pepper leaves and ginger blossoms.

The reaction has been positive. “They love it,” says Opocensky of his customers. “They are very surprised and ask questions, like where exactly they come from, how can you find it? And lots of conversations are about locally foraged food.”

Huang, his supplier, says foraging has caught on overseas. “It has become a kind of lifestyle for a lot of people in the west, so on the weekends, there are lots of parents and kids who go out and forage,” she says.

But in Hong Kong, it is mainly elderly villagers who still possess local knowledge about edible wild plants. She is sad that the custodians of this traditional knowledge do not see their knowledge as being valuable.

Meanwhile, it is hard for Hong Kong people to incorporate foraging into their lifestyle because they work such long hours and simply do not have the time.

“They now go to the supermarket and eat bananas from Chile and they eat pak choi from China. They lost the ability to get connected with the entire environment. What touches me most is that foraging is not for making money but making people aware of all the things that are in the environment,” Huang says.