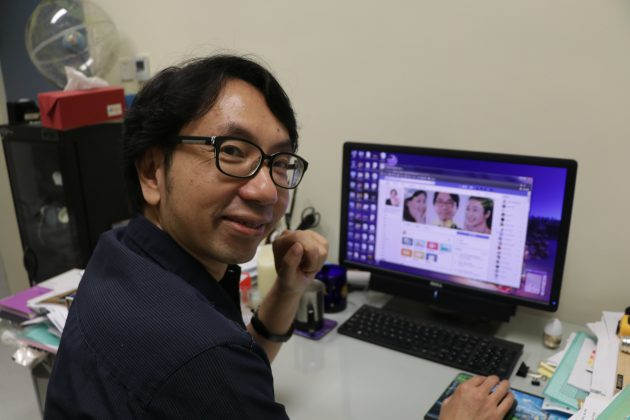 In a city not known for its scientific prowess, Tong Shiu-sing may be the closest thing Hong Kong has to a rock star scientist – not because he is at the forefront of cutting edge research but because he may just the most recognisable physicist in town.

Tong is a senior lecturer in the Physics Department at the Chinese University of Hong Kong (CUHK) and is best known for his quirky role as “Dr. Tong” (湯博士) in a popular Television Broadcasts Limited (TVB) programme- Sidewalk Scientists (學是學非).

While many people might think of physics as being boring or impenetrable, Tong has managed to present scientific knowledge in an accessible and even humorous way.

His first love was astronomy, being a stargazer as a child, but he soon found that physics was the fundamental science, the most basic way through which to understand the world.

His passion for physics took him all the way through graduate school and he had assumed he would pursue a career in research. But after completing his PhD at CUHK, Tong realised he was not a typical “lab person”. He was more of a “people person”.

Instead of spending his time chasing research grants and writing journal articles, he preferred a more interactive job where he could communicate with others. “I like to get to know others and communicate with them. This helps me to get a better picture of who they are,” he says.

Tong enjoys teaching and likes to spend a lot of time preparing for his classes. Although teaching involves intellectual stimulation and the dissemination of knowledge, it also incorporates elements of performance, and this is something that Tong discovered he has a gift for and love of.

His entry into the world of television started from a random phone call he got from programme makers at TVB one day.

“Basically they wanted me to perform an experiment on camera and add some explanation…it was very easy,” he says, explaining that he is as an extrovert who likes performing in front of audiences whenever he has the chance.

His colourful on-screen persona began to take shape after he started filming for the first few episodes of Sidewalk Scientist, a programme that explores science in daily life through performing various experiments.

“I was brought onto the set of an ancient pagoda, where I was told to dress up in a costume,” he recalls. “Then I realised I was expected to do some acting.”  Although Tong was not a professional actor, his jokes and interaction with the presenters was positively received by the general public.

Tong is grateful for the support his employer has shown for off-campus performances.

“There is a reason why I chose to stay in CUHK. They provide me with lots of freedom,” he says. Tong says he is free to use and develop his own teaching methods and is able to squeeze time off from work to do something he adores.

“I don’t think this can be measured by money, because I’m able to do something that can influence society.”

Tong has taken advantage of his TV fame to interact with the public on social media and share his knowledge of science. His physics-themed Facebook page “Dr. Tong’s Sharing” (湯博士的物理空間) now has more than 24,000 followers. He hopes the page will attract not just his students but also members of the public to see the fun and interesting side of physics.

He is also active on the discussion forum Hong Kong Golden, using his real name. Discussions can get heated and insults personal on Hong Kong Golden, but Tong says he is thankful that he does not get a lot of “haters” online. He thinks this is mainly because he shows sincerity and wears his heart on his sleeve. He understands that the old-fashioned way of talking to young people in an authoritative way does not work any more.

“I think I really show the message that I care a lot about my students, about young people,” says Tong. “I would support them to understand themselves or break through in their growth, to fight against social norms and to take the path they truly desire.”

As for his own path, he wants to be the first to try new things. He was the first physicist to act in a TV series, the first to apply for funding from the Education Bureau to set up a physics database.

“I’ve the courage to try to achieve things that others aren’t willing to,” he says proudly.

As a semi-celebrity, Tong says he does feel pressure, but it mainly comes from within. He was invited to be a guest speaker for the Inno Tech Expo 2017 at the end of September and was worried about the expectations of the audience.

“People might come in with certain expectations or standards from the other speakers. What if I can’t give them what they want?”

Still, he will grab such opportunities because he enjoys interacting with the public. Comparing his off-campus work with classroom teaching, Tong says teaching is more limiting in terms of creativity and inventiveness because of the constraints of the syllabus. “You have to ensure that your students understand the logic within the theories,” he says.

The parameters are different when Tong is doing work on promoting popular science (科普). Popularising science is all about promoting the understanding of science among the general public. It is done through various channels like performing experiments in public, promoting science education through television shows, online platforms and journals.

Being a CUHK science lecturer means Tong is often invited to give school talks and attend activities in various district communities.

“From my perspective, popular science isn’t targeted for particular groups; it shouldn’t be constrained by a set of rules,” he says. “The logic is simple; you apply different methods on different audiences.”

For example, when explaining scientific concepts to children, Tong uses more graphics and props; when talking to university students, more abstract concepts can be introduced.

The key is to understand the needs of a particular demographic group. Tong seems to have an intuitive grasp for this but admits he is still unsure what the most effective way is to promote science in Hong Kong. He says this is because people in Hong Kong are stuck in their existing views and mindsets and often put emotions before reason.

“Hong Kong is an anti-intellectual city where people are often emotionally drained and our [political] stances often come first,” he sighs.

Tong said the government is also like this. As an example, he cited the third runway proposal for the Hong Kong International Airport. He says the government should convince the public with scientific evidence that the proposal is safe and cost effective, so people would not think the government is building it only for political or economic reasons. He said if people could look at the matter objectively, they would understand the reasons behind it.

For Tong, it is a person’s approach to knowledge, rather than the knowledge they have that is more important. He says that not everyone understands the theories behind science, but they can learn them through applying scientific methods or simply by analysing them logically. This can be applied to how we understand and interact with our society as well.

Tong uses the idea of the Mandela Effect –where a person or group of people becomes convinced that something happened though it did not – to describe Hong Kong’s current predicament.

“Are the things we choose to believe reliable? Or are we just believing because we want to get self-satisfaction and feel included?” he asks.