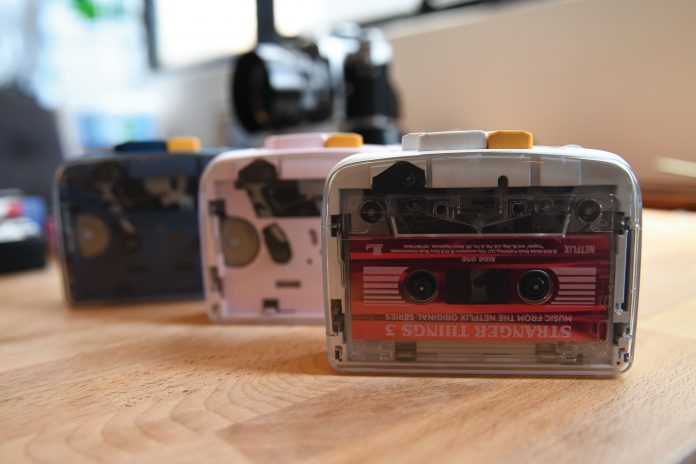 NIMN Lab kickstarted the world’s first cassette player which is compatible with Bluetooth 5.0 headphones or speakers.

Nowadays, music streaming services make it easy for us to get access to almost any song, anywhere and at any time. However, cassette tapes have made a comeback in a wave of nostalgia.

Sales of cassette tapes have seen an upsurge in recent years when a mixtape was shown on-screen in Marvel’s Guardians of the Galaxy film. The appearance of cassette tapes can also be found in a popular Netflix’s TV programme, Stranger Things. Some foreign singers such as Justin Bieber and Ariana Grande have also published their album in cassette format. This shows the antiquated device is gaining popularity again in this digital age.

NINM Lab has launched a Kickstarter project, which is a Bluetooth 5.0 cassette player, giving the music device a brand-new appearance. The merging of Bluetooth and conventional audio technology from 40 years ago makes the tape player stand out from other similar devices. However, the design studio is not only selling the features of the cassette player. Sanami Kwok, who works on public relations and marketing for NINM Lab, says, “We won’t emphasise that our product is more technologically advanced. Instead, we take an emotional approach and relate the products to one’s mood.” The Lab has named the cassette player “IT’S OKAY”, hoping to establish a dialogue with users and remind them that when we are saying “It’s okay” to our friends, there may be possibilities that we are actually not. NINM Lab thinks that music has accompanied people in times of happiness and healed them in times of sadness so the launch of IT’S OK Bluetooth 5.0 cassette player brings a new perspective to the romanticism of the 80s cassette player.

Apart from taking an emotional approach, the design studio also focuses on the design of the cassette player. They have found that cassette tape collectors are not necessarily music lovers but people who love aesthetic goods. “Some people may think that CDs could be replaced by music streaming services. However, cassette tapes or vinyl records are special and tangible products that encourage people to purchase them even if they know they are not going to listen to the songs.” They believe that the design of cassette tapes is one of the reasons for its growing popularity in the digital era.

Having noticed the increased demand for an aesthetically pleasing music player, NINM Lab has decided to recreate an affordable device for cassette tape collectors, providing customers with a way to appreciate their cassette tapes apart from shelving them. Its transparent case allows people to display their tapes while listening to them, just like when people share songs they are listening to on Instagram.

In fact, they have encountered some difficulties in finding a manufacturer. Cat Ong, another member from NINM Lab, explains, “The greatest obstacle was finding a supplier since compact cassette technology had 40 years of history. Production of cassette players declined in the 90s when compact discs were introduced. Indeed, the production of Sony Walkman has been ceased for 10 years. So, there are not many factories that still produce cassette players.” Eventually, they found a factory that has 30 years of experience in manufacturing cassette players to support their production.

Despite having obstacles in launching the cassette player, NINM Lab has successfully raised $648, 205 with 978 backers on Kickstarter. The first batch of products will be delivered to their customers by the end of 2019.

If you want to know more about the ITS OKAY Cassette Player, you may pre-order on their website or visit their Facebook page for more details.