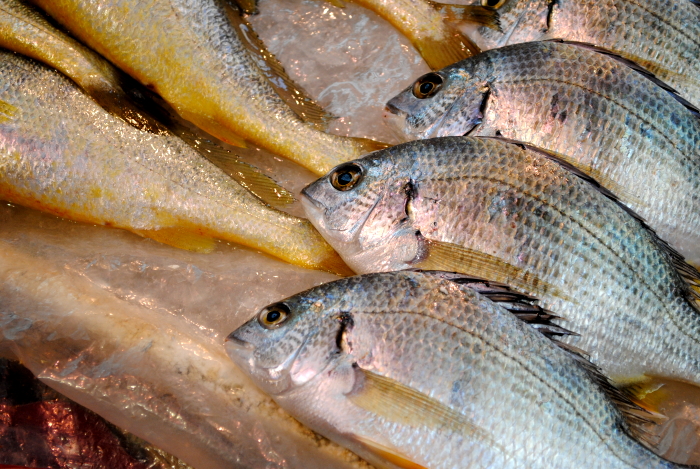 As you walk along Fu Shin Street, the sound of vendors’ proclaiming their wares fills your ears. Stores are crammed in both sides of the street, but there is order in the chaos. Fu Shin Street market is one of the few remaining traditional wet markets in Hong Kong.

Fu Shin Street wet market is located in Tai Wo in the New Territories. The late Qing Emperor, Guangxu (光緒), separated Tai Po into Tai Po market and Tai Wo to settle the conflicts between the local clans of Tang and Man. To serve people in Tai Wo, a wet market was established in Fu Shin Street in 1892.

Since it was the centre for residents in Tai Wo, a Man Mo Temple was built in the middle of the market. This also became the landmark of the market. In the temple, there was a Chinese steelyard. Customers were welcome to check the weights of food they had bought there.
Like other traditional wet markets in Hong Kong, Fu Shin Street wet market was once very prosperous but started to decline when an indoor market opened in nearby Tai Po Market.

The 28-year old vegetable store Cheung Kei (張記) is one of those threatened by the indoor market. In order to survive, these stores sell their vegetables at a lower prices.

Established for over a century, Fu Shin Street wet market still looks much as it always did. Tonio Chung, who has lived in here since he was born, says that the market has not undergone great changes. And the number of people buying at the market remains stable.

However, he says that the turnover rate of stores here is so high that only a few traditional stores are left. Besides the rapid emergence of new smaller stores, modern chain supermarkets, Wellcome and Kai Po Supermarket, have also entered the market.
Supermarkets appeal to the younger people like Chung because they sell goods at their marked prices. Customers need not worry about being cheated.

Chung says  that some vendors in Fu Shin Street cheat customers mainly using two methods. Vendors may sell goods at a price much higher than the marked price. They may also play tricks with in the scales, so the fresh food actually weighs much less than is indicated.

“They can sell goods to me at $80 even if it is marked at $38. It is an unreasonable practice!” he exclaims.

Due to the invasion of the supermarkets, some small fresh food stores like Cheung Kei have seen profits drop. They have lost one-third of revenue. However, some grocery and fish stores are not threatened by the supermarkets.

These stores survive by targeting different customers. Mr. Chiu of the 30-year old grocery store, Tin Shuen Ho (天順號) explains that his store attracts the elderly in particular because unlike in the supermarkets, customers can ask the shop assistants to get their things they need.
Another key to winning customers is the quality of food.Customers believe food in the wet market is much fresher. “The vegetables and fruits in chain stores are not fresh. The meat is frozen. The packaging does not allow you to choose,” says one customer, Ms Chan.

As redevelopment continues to erase what is left of traditional Hong Kong, the number of wet markets dwindles. Though traditional wet markets like the one at Fu Shin Street  are not as tidy and organized as the new indoor markets, they are an important part of life.  “When I want to buy food, I will immediately think of the Fu Shin Street wet market,” says shopper Ms Lau.