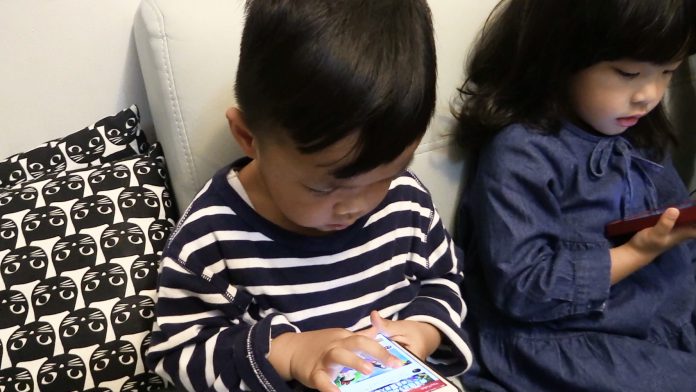 How is smartphone and digital device use affecting eye-health of Hong Kong’s young children?

It’s a warm Sunday afternoon. Many parents would consider the fine weather as an opportunity to take their children out to the park or go hiking. However, 10 year-old Oswin Lian would rather stay at home. He far prefers playing on his smartphone to outdoor activities.

Oswin is a part of a new generation in Hong Kong that is growing up with all kinds of smart devices at their disposal. They use digital devices for both entertainment and as educational tools.

Oswin’s mother, Tammy Or Ka-bo, explains that over 90 per cent of his homework has to be done on the computer, so he can’t avoid spending long hours on electronic devices.

This increased exposure to electronics has had a detrimental effect on children’s eye-health. A 2015 study by the Department of Ophthalmology and Visual Sciences at The Chinese University of Hong Kong found that 14 per cent of six-year-olds had myopia. This figure is almost doubled for seven-year-olds.

Children even younger than Oswin are also using smart devices. Pinky Cheung Yuk-fung is a working mother with two children aged one and three. Despite their young age, they are already familiar with the online video sharing platform YouTube and with smartphone games.

Like many parents in Hong Kong, Cheung uses digital devices for what has been called “e-babysitting”. This is when parents use smartphones, tablets and other smart devices to keep children calm, or distracted so their parents can do other things.

This behavior is not encouraged by Hui Li, who is an early childhood development specialist at the University of Hong Kong.

“Young children are still developing their muscles, fine muscles to control eye movement and the controlling is not mature so far,” Li says. “I’ve found that in Hong Kong, many young parents are not aware that this kind of e-babysitting behavior is harmful to young children’s eye development.”

However, Li concedes that some smartphone apps do have educational purposes, capable of teaching children new words in English and in Chinese, as well as logic.

These educational apps are common and plentiful. Motherapp, an app development company, develops interactive apps for children. Their vice president of sales, Hauman Chow, sees the apps as a way for children to have fun and learn simultaneously.

However, some families still believe that children should not use smartphones at such a young age. In the Docherty family, four year-old Thomas and six year-old Megan read books and watch television instead. When they use the computer, their mother, Teresa Docherty, keeps an eye on them to make sure they don’t spend too much time on it.

Vincent Ng Sheung-shun agrees this is a good strategy. Ng, who is an optometrist at the Polytechnic University’s School of Optometry, says it is easy for children lose themselves in smart devices because they are interactive. The amount of time spent on electronic devices decreases the time children spend outdoors, which doubles the negative impact on their eyesight. To counter this trend of deteriorating eye health, he encourages all parents to let their children play outdoors.

In a modern city like Hong Kong, it is hard for children to completely avoid using electronic devices. Technology plays a big part in their everyday lives, both at home and in school. Parents face a tough challenge in trying to balance technology use and their children’s eye health.