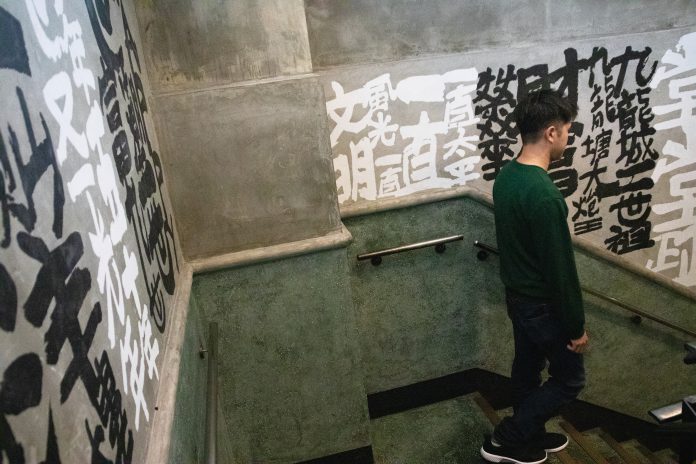 Like many other teenagers, Rex Yiu met his first love – a girl – when he was a secondary school student. But he had a strange feeling about dating a girl. He did not feel any affection and was unwilling to hold her hand or hug her. There he learnt about his sexuality.

Having come out publicly and happily married with his male partner, Yiu, 34, now works in the administrative section for a non-governmental organisation. Previously he worked as a social worker mainly helping and providing counselling service to the LGBT community in Hong Kong for 10 years.

Growing up as a sexual minority, Yiu definitely feels the pain and sufferings of the LGBT community. Having studied in a Christian secondary school, where homosexuality is considered a sin, he felt guilty for his sexual orientation when he was a teenager.

“I chose to believe in Christianity at that time, which intensified my inner struggle. The situation went worse since most of my friends were Christians and I did not have the courage to tell them [that I’m gay],” he recalls.

During the toughest times of his life, he wrote diaries about his inner thoughts. He even thought of committing suicide. “In the worst days, I had 20 to 30 nightmares every night which kept me awake,” he recalls.

Yiu eventually plucked up his courage and decided to come out in a fellowship gathering. But responses from his fellowship members made him feel weird. “Maybe people in the fellowship were teenagers, so they didn’t have any peculiar reactions. But no one would discuss or share any views on the topic [about coming out],” he says.

He at last found comfort when he came out to a priest who prayed for him instead of judging his decision. As he began his university study, he met some new friends who were more receptive and open-minded towards his sexuality.

The pain of growing up in Yiu’s teenage life had helped him understand more about his own identity and led him to study social work in university in a bid to help other sexual minorities who suffer from similar problems.

He recalled an experience in his university life which changed his worldview. An anti-LGBT organisation, the Society for Truth and Light, did a full-page advertisement expressing their opposition against the legislation of Sexual Orientation Discrimination Ordinance on Ming Pao. To his surprise, his Christian classmates began to question their religion. “It was the very first time that I thought there might be a possibility for the world to change,” he says.

Yiu became a social worker after graduating in 2006. LGBT was still not a major service target in the local social work field at that time. There was no formal organisation which specifically offered support to the LGBT community. Whenever some mainstream NGOs start volunteer projects about LGBT, Yiu never hesitates to join. “It’s one of the dreams that I have always kept in my heart, and it finally comes true,” Yiu says.

“It’s one of the dreams that I have always kept in my heart, and it finally comes true.”

Yiu’s adversities in the teenage years have made him a more understanding person, especially when helping the LGBT youth, who long for others to understand their difficulties and loneliness. “My identity and experiences help me better understand others’ situations,” he explains.

He thinks these LGBT teens easily have problems with socialisation, as they face many different barriers – not just from society but also from the LGBT community itself, as minority groups are often marginalised within the community.

Yiu says it is not just the LGBT teens who need counselling service, but also their parents, who very often either know nothing about LGBT or perceive it negatively. “Many would think it’s good enough to have the courage to come out to their parents. But in fact, it may be the start of suffering for the parents, and the children seldom know how to help their parents,” he says.

Yiu also says the most challenging part of his job is to provide support to people living with HIV or drug abuse problems, especially with the stereotypical views in society.

Yiu now switches from frontline work to an administrative position, as he hopes to take a break after working in the field for a decade. “When you make great effort to do your work, it actually consumes lots of your energy,” he says.

Two years ago, the social worker married his partner in Denmark after being together for nine years. It was not easy – it was only shortly before his marriage that he completely came out to his whole family – the last one in the family to learn the news was his 90-year-old father. He originally planned to keep his father in the dark, but Yiu changed his mind.

“If I did not tell my father [about my sexuality] before getting married, I wouldn’t tell him for the rest of my life,” Yiu says. After Yiu came out, the father and son had a lengthy talk about sexuality, marriage and even child adoption. Everything was more peaceful than Yiu thought, and he felt relieved.

Speaking of his future plans, Yiu says he might go back to the frontline in the future. He hopes the LGBT community one day will be treated equally. “I believe society can be more inclusive,” he says.