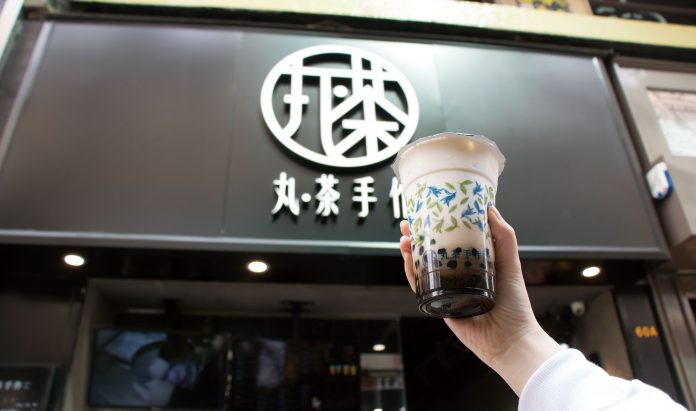 Foodstagram phenomenon has a strong influence on the bubble tea market

Chewy tapioca pearls with a photogenic pattern of stripes made of brown sugar – bubble tea, has become a fad in Hong Kong recently. Taiwanese bubble tea lovers are willing to endure a long wait for this comfort food. Once bubble tea fans grab the drink, they always let their camera take a zip first. Social media platforms are flooded with check-in posts featuring the latest Taiwanese bubble teashop.

Nowadays, bubble tea addicts do not pay any attention to the dispute of its origin. They only care if they have missed any latest bubble tea shop on their checklist.

Maggie Wong Lai-kei, director of BaBo The Drink Shop, imports this bubble tea brand from Taoyuan to Hong Kong due to her children’s affection for bubble tea. Wong finds this is a healthy brand because the tapioca balls are all handmade with no colourings and preservative. In a bid to get a share from this sweet market, Wong invents new products like the avocado special drink and brown sugar cold drip coffee for adult customers.

“Bubble tea is for the ladies, young ladies love bubble tea a lot. If the drink is photogenic enough, it really attracts them,” Wong says. That is why the store is decorated with a vernal freshness of young girls. The walls are painted in pink and bunches of flowers are placed for customers to take some artsy photos.

Although Wong acknowledges the promotional effect of foodies, she thinks the opposite effect is more detrimental. “If they appreciate your drink, there is an extra 20 per cent of the positive effect. But when they bad-mouth you, it will be an extra 80 per cent of the negative effect.” Wong once faced criticism online just because she refused an invitation to a foodies networking event from a marketing firm.

“When they bad-mouth you, it will be an extra 80 per cent of the negative effect.”

Matthew Chiang, co-owner of Bubble Tea Work, shares a similar feeling towards the foodies. As a Hong Kong originated brand, Chiang and his partner strike to keep the quality of handmade tapioca balls as their strategy to survive in this nearly saturated market. Chiang says: “We employ a master to knead tapioca flour behind the show window. Because we want to prove our products are freshly made without preservative. We have no intention to make it as an attraction for Facebook postings.”

Chiang says he seldom relies on promotion posts by foodies. He has doubts over the credibility and subjective judgement of taste. Still, he has a team to collect online posts data for internal reference. Instead of depending on Foodstagram promotion, Chiang values the cooperation with student fans who distribute fan-made goods for their idols, mostly K-Pop idols’ birthday celebration. “Actually we just provide a place for the fans to take a check-in photo with the decoration and distribute some small gifts and cup sleeves. But it influences our sales a lot,” says Chiang. He reveals the profit has a significant increase of 30 per cent to 40 per cent within a few days after an event is dedicated to some popular idols.

In fact, some foodies also reflect on their role in influencing the industry, instead of just focusing on business opportunities. Luncinda Leung, a social worker, started her Foodstagram – “foodictionaryhk”, four years ago with her sister. It currently has 255,000 followers. Recalling the early stage of getting followers, Leung thinks the rule of thumb is to understand who your followers are and match the suitable price range of food. She shows a photo of rice with curry fish balls, which is sold at HK$13, but the post has more than 800 likes.

Although Instagram is an image-oriented social media, when it comes to the recommendation of dishes, Leung thinks the taste is more important than the appearance. “I really want to introduce food that is delicious. It will be better if it has an enticing appearance. But even it does not look appealing, as long as it is tasty, I will still do a post on my Foodstagram,” says Leung, adding that she often uploads photos without any monetary reward.

“Camera eats first” propels the creation of Foodstagrams. Leung is doubtful about the foodies’ effect on the Taiwanese bubble tea industry. “The flooding posts of a particular food from different Foodstagrams can make a type of food suddenly become very popular, but also out of the public eye very quickly,” says Leung, “Hong Kong people like jumping on the bandwagon of sharing trendy food and that puts many food and beverage outlets into death.” In fact, this is what happens to eateries on Dundas Street, restaurants move in and out every six to nine months, Leung adds.

“Hong Kong people like jumping on the bandwagon of sharing trendy food and that puts many food and beverage outlets into death.”

“There are people posting Taiwanese bubble tea whenever I browse my Instagram and Facebook. If the beverage appears to be photogenic, they will think it is worth to have a try,” Leung says. She says she cannot differentiate the taste of the brown sugar bubble tea from different shops so that it is difficult for this industry to be sustainable, no matter how tasty the beverage is.

Regarding the “camera eats first” phenomenon, Francisco Cisternas, assistant professor of the Marketing Department at the Chinese University of Hong Kong, suggests this is a way for the young generation to search for independence and establish a social identity. The reward they get from social media, in the form of likes, comments, and sharing, is immediate, and it reinforces this behaviour.

Cisternas believes Foodstagrams play a determinant role in the evaluation of a beverage shop. “Recommendations from a friend have a significantly stronger impact on consumers’ purchase intention and brand evaluation than other forms of marketing,” says Cisternas. Although it allows the shops to pick up free publicity, Cisternas mentions the risk of losing control of the advertising content by using Foodstagram promotion.

In the long term, the incentive of foodies to cooperate with bubble tea shop is complicated, he says. “On one hand they can be charged for giving preference to bubble tea shop in their page. But on the other hand, they have to be careful not to hurt what people want to see. Because this may have a negative effect on their own business model,” Cisternas adds.