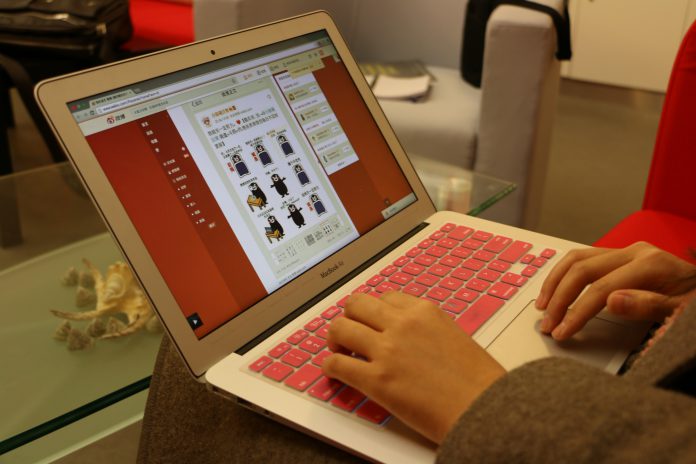 What do mainland net warriors achieve by trolling Taiwan? It was coordinated with military precision – at 7 p.m. on January 20 this year, an army of Mainlanders went to war with Taiwan. Except this was not a physical assault but a virtual one, waged by mainland netizens on what is perhaps best described as a trolling expedition. Most of them were members of a “post bar” or online forum run by Chinese internet giant Baidu called Di Ba, literally “imperial bar.” They called their action a “Great War” and rallied under the battle-cry: “When Di Ba goes into battle, not even a blade of grass can survive.”

What they did was flood the Facebook pages of Taiwan media such as Apple Daily and Sanlih News along with that of president-elect Tsai Ing-wen of the pro-independence Democratic Progressive Party.

Tsai’s historic victory four days earlier was what triggered the concerted attack as the Di Ba warriors circumvented China’s Great Firewall to deliver their message that, “Taiwan belongs to China.”

They trolled webpages and social media by posting jingoistic slogans, photos of Chinese food and of natural scenery in the Mainland as well as propaganda images featuring Chinese leaders. There were nearly 40,000 Facebook comments within just eight hours under one of Tsai Ing-wen’s Facebook posts alone.

Lou Jia-ming, a year two student studying in Fudan University, joined the Di Ba operation that day. He posted a screenshot of an online news article from the Global Times about a statement from the Norwegian Ministry of Foreign Affairs reaffirming Oslo’s adherence to the one-China policy since 1970. Lou says he did this in response to a report in Sanlih News that said the Norwegian government recognised Taiwan as a state.

“The Taiwanese are afraid when we present them with the facts,” Lou says, “They keep resisting because these facts violate what they believe.”

In order to join the Di Ba operation, Lou had to connect to a virtual private network (VPN) to bypass the Great Firewall and gain access to sites banned on the Mainland, such as Facebook and some Taiwan media. It was not his first time.

Lou started jumping over the wall after the Taiwan presidential election because he has never been to Taiwan before and wanted to know more about the island. What he saw on the other side came as a huge shock.

Lou used to believe Hong Kong, Taiwan and mainland China belonged to one family. He recalls that when there were disputes between Vietnam and Taiwan over islands and reefs in the South China Sea in early January, many mainland netizens supported Taiwan online. Therefore, he was surprised and hurt by Taiwan netizens’ hostility towards their mainland counterparts.

He thinks Taiwan netizens have an irrational attitude towards mainland netizens and blames this on the Taiwan media.

“What we [Di Ba warriors] are doing is to show the Taiwanese that we are actually very nice,” he says.

In order to win hearts and minds, Di Ba’s administrators set some ground rules – members could only use “civilized” language, they were banned from using insulting images and pictures of leaders. Lou stresses the operation was aimed at fostering friendly communication.

“First of all, Taiwanese are our compatriots. This is for sure and we are not fighting against them,” he says.

“My first impression was ‘it’s impossible!’ How come there is no one using dirty words?” he laughs.

Xu is 22 and has been active on Di Ba since his teens. He has taken part in many attacks, most of them targeted at the online forums for mainland fans of Korean pop stars. These attacks were usually triggered by what Di Ba members viewed as the “idiotic” things Chinese K-pop fans said or did in support of their idols. The Di Ba army would flood the forums with insulting messages.

Xu recalls one of his most memorable attack experiences, targeting a forum for Chinese students in Japan called “Home of Japanese”. He says a netizen was banned by the administrator of “Home of Japanese” after a post titled “Viva the People’s Republic of China!”. Di Ba members retaliated and the forum collapsed after Di Ba’s attack.

When he is asked about the content of “Home of Japan”, Xu cannot give an answer.

“I’d never been to that post bar before the attack,” he says with an embarrassed smile.

Di Ba was set up in 2003 on a relatively small scale and is now a giant forum with over 20 million registered members. Xu thinks its mega scale has turned it into a “rendezvous with bored people”.

“Most people who participate in Di Ba’s post attacks know nothing about the context,” Xu says.

Looking back at his own past involvement, he admits the attacks did not achieve anything but rather just satisfied the members themselves. Xu thinks the “victories” they score in post attacks feed their vanity.

Occasionally, the post attacks may give Di Ba’s members the illusion that they are contributing to society.

“If it is supported by a moral cause and makes people feels like ‘I am helping the country’, everyone joins.” Xu says.

Xu did not join the “Great War” but, as an experienced hand, he guesses the warriors who participated in it must believe that they are helping the central government to educate the Taiwanese. The Di Ba warriors believe it is unarguable that Taiwan belongs to China and the “Great War” is an expression of this political aspiration, says Xu.

However, Rennie Zhong Yu, a 19-year-old mainland student in Hong Kong, believes the motivation behind the “Great War” is more banal. While some commentators see the “Great War” as some kind of political mission, Zhong says the attacks are not about political engagement, but a form of entertainment for most of the participants.

“The aim is not that noble,” she says. “Basically, it is just a parade for everyone to have fun.”

If that is the case, then the feeling may be mutual – some Taiwanese netizens say they are more amused than angered by the “Great War”. Lothar Lu Shao-hsuan, an 18-year-old in Taiwan, says he was entertained and amazed by the “attack” of food photos and funny online stickers. Lu agrees that it was more like a friendly conversation than a war.

But some of his friends on PTT, the leading online discussion forum in Taiwan, think differently. After the Sunflower Movement, a campaign in 2014 to oppose a trade deal with the Mainland, PTT has become a major platform for sharing political views. It is also dominated by DPP supporters.

Although Lu belongs to a “deep blue” family that strongly supports the Kuomintang (KMT), he has defected to the “green camp” under the influence of PTT, and he is not alone.

Lu says that his friends on PTT are not angry about the “Great War”, but they do find it absurd that mainland netizens resort to jumping over the wall to access Facebook. “It’s like caged birds being ignorant of freedom,” says Lu.

Some mainland netizens point out the “wall” does not just exist on their side of the Taiwan Strait. Mainland student Rennie Zhong says that although people in Taiwan enjoy internet freedom, the island’s media still restricts citizens from receiving different opinions about the Mainland.

“The wall exists. It is an invisible wall built by education and the mainstream which constrains your opinions,” she says.

Contrary to the authorities’ strict control on the internet and media in China, Zhong says there is “an internet environment with more freedom” and she is optimistic about the future.

Jack Qiu Linchuan, an associate professor who teaches global and Chinese communication at the Chinese University of Hong Kong, does not share Zhong’s assessment.

“The freedom of speech in the Mainland has definitely decreased after Xi Jin ping became the General Secretary [of the Chinese Communist Party],” says Qiu.

Qiu thinks “the internet environment with more freedom” that Zhong believes mainland netizens are enjoying is a limited kind of freedom for individuals who are not trying to mobilise others. He says the true test is whether citizens enjoy public freedom.

Today’s Di Ba warriors may launch large-scale attacks en masse, but these have limited impact in the “real” world. Qiu describes the “Great War” as a kind of “slacktivism”, which is a term that combines “slacker” and “activism”. It is used to describe many people taking part in an action on the internet which requires little time and effort but massages the egos of the participants; often such activities make little real change.

In contrast, Qiu believes the online world in Hong Kong has gradually evolved from slacktivism to activism.

When it comes to local online political discussion and activity, Hong Kong Golden is the foremost forum whose members sometimes issue calls for physical action, for instance calling on protesters to occupy Lung Wo Road during the Occupy Movement. What started life as a forum for comparing prices of computer parts in Sham Shui Po’s Golden Centre in 1999 has evolved into a site where news, gossip and political views are shared in posts, mashups, memes and parody songs.

Sing to Say, a popular lyricist, is famous for his politically charged covers of Cantopop hits on Golden’s YouTube music channel. Sing to Say says he used to be politically apathetic until he watched a derivative music video based on the Japanese cartoon, Attack on Titan, that cast the Chinese Communist Party as the villain threatening Hong Kong. The song got him interested in politics and he started writing his own songs because he realised how influential such works could be.

Kelvin Chan Siu-to, a senior member of Hong Kong Golden, says the forum teaches him to understand society. “Golden Forum is a platform to gather teenagers and encourage them to be engaged in political issues,” he says.

Chan notes the change in Golden from a forum for staging online post attacks, to a place to organise petitions to the White House and, ultimately, actual protests. Many members of political parties and groups formed by youngsters, such as Hong Kong Indigenous, are active on the forum. This leads Chan to believe Golden will be a major platform for political opinion in the future.

The term “keyboard fighter” is often used to describe netizens who start online fights without taking action in reality. But today it seems possible for online wars to turn into real action. What, if anything can keyboard fighters achieve? The next “war” may provide the answer.