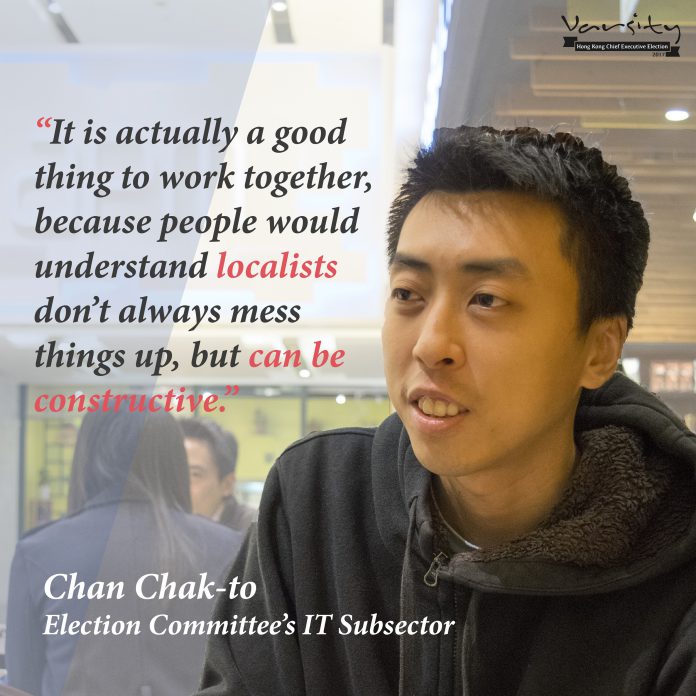 By Elaine Ng and Rivers Zhang

Chan Chak-to, who stood as an openly pro-Hong Kong independence candidate in last year’s Legislative Council Election, says there’s no conflict between his pro-independence stance and his being in the Election Committee.

The 32-year-old engineer doesn’t think that in seeking a seat on the 1194-member committee that will pick Hong Kong’s next chief executive, he is acting against his political beliefs.

“I’m trying to get as much airtime as possible to explain our beliefs,” Chan says. “Being part of the Committee allows us to spread our influence and prevents it from being dominated by pan-democratic and pro-establishment voices.”

In last September’s Legislative Council election, Chan won 12,854 votes in Kowloon East, 30,000 votes short of getting elected. He announced his support for independence after his nomination was approved, despite his refusal to sign a form confirming he agreed Hong Kong was “an inalienable part” of China.

He has brushed off the loss and moved on. He joined the 30 member IT Vision bloc to contest the Election Committee elections and the group bagged all 30 seats in the subsector.

The group spans the non-establishment political spectrum, with pan-democrat members such as the Democratic Party’s Sin Chung-Kai, the Civic Party’s Chan Yu-ming, and Francis Fong Po-kiu, the president of Hong Kong Information Technology Federation, as well as young radicals like Chan.

Sitting around the table with pan-democrats, Chan acknowledges the need to compromise some of his values. “Our collaboration goes rather smoothly,” he says. “Some pan-democrats have political views even more radical than mine.”

Chan says there is mutual respect between IT Vision members despite their different political orientations. “It is actually a good thing to work together, because people would understand localists don’t always mess things up, but can be constructive.”

When asked to comment on the chief executive contenders’ manifestos, Chan thinks retired judge Woo Kwok-hing’s stands out from the other three. He says Woo has ‘thought it through’ and looked at the big issues, such as how to bypass Beijing’s ‘831 decision’.

By Monday morning, Chan’s nomination form was one of the 180 handed in by Woo as he crossed the required threshold to enter the race. All of his nominations came from pro-democracy Election Committee members, including eight from IT Vision. Another 21 members from the group nominated John Tsang.

Chan says that for him, “The decision of who to nominate should be based on the contenders’ platforms instead of their public image.”

As to who he will vote for on March 26th, Chan says it is too early to say as that will depend on candidates’ performances in the election debate and circumstances at the time.

“If a [majority of say] 800 votes [from the establishment camp] go to a single candidate, then I will probably cast a blank vote. If my vote is vital to the result, then it’s not impossible that I will vote for John Tsang half reluctantly,” he says. 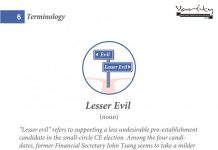 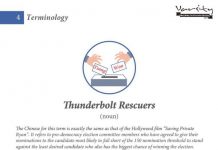 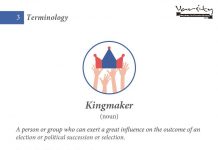