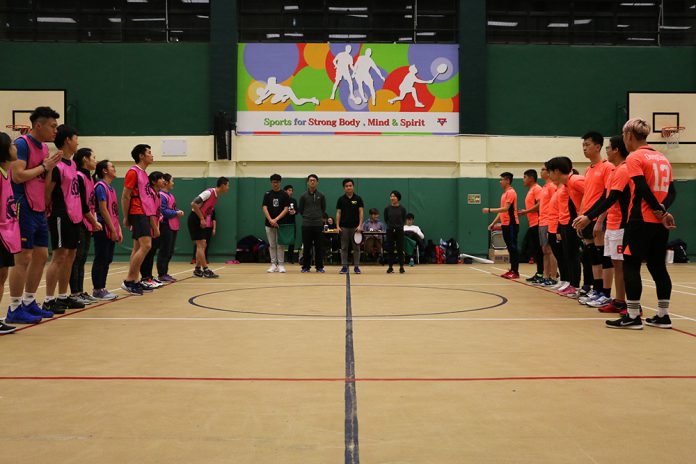 This is one sport Hong Kong does not want to miss

With just ten seconds of the game left and two players down, the Hong Kong dodgebee team was in dire straits. As the timer ticked down to the final second, the team launched a final offensive, successfully knocking out three players on the opposing team, securing the match win.

Recalling the memory with a smile, Ken Lai Kong-ip, the head coach and a founder of the Hong Kong Dodgebee Association Limited (HKDA) said his team would end up finishing sixth in the Taiwan open tournament – a first for a Hong Kong team. Dodgebee is a mix of both frisbee and dodgeball. Originating from the United States in the 70’s, the sport was brought to Asia in the late 80s. Lai first discovered the sport online and with a group of friends, formed an association to promote it in Hong Kong.

The rules are simple- each team has up to 13 players and players are elimnated if they are struck by the dodgebee disc – which is made of soft foam – or if they drop it when they try to catch it. The side that eliminates the other first or has more players at the end of the four minute round wins the game. Sometimes, there may be multiple discs on the field and teams have to think of creative methods to win. “It consists of many sports elements, requiring both athleticism and strategy,” says Lai.

What most attracts Lai to dodgebee is that the sport is easily accessible for anyone. He says the gender, height or weight of a person does not matter, they can still play on the same field against one another. As the disc is made of soft materials, dodgebee is also a very safe sport that even children can learn to play without being afraid of getting hurt, adds Lai.

Another advantage dodgebee has over other sports is that it does not require a lot of space. Lai believes this makes the sport highly suitable for a compact city like Hong Kong. “It only needs a volleyball court’s space,” he says, “you could have like 26 players in the court at the same time when you are playing it.”

Dodgebee is still a relatively new sport, however it is quickly gaining popularity. Lai recalls the competition HKDA held last year at Wan Chai’s Southern Playground where there were several hundred people competing and around a thousand spectators. He feels the sport has caught the spotlight as many different media outlets reported the event. Lai hopes this may galvanize the Government to provide more resources for the sport to grow.

The association provides starter courses as well as lessons for trainers, participants can learn at least one technical skill within three to four hours.

If you are interested in learning the sport or want to know more about it, please visit Room A7, 26/F, Jing Ho Industrial Building, 78-84 Wang Lung Street, Tsuen Wan. You can also search “Hong Kong Dodgebee Association” on Facebook or their official page http://hkdodgebee.org/ for more details.