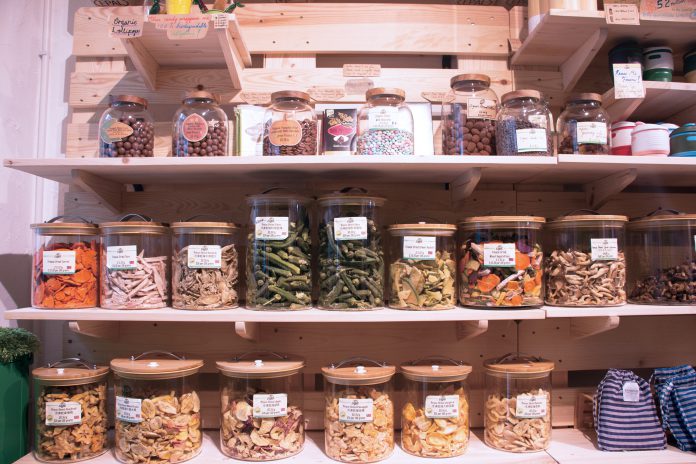 More than 290 organisations, including some of the world’s biggest packaging producers and leading consumer brands such as Coke, Pepsi, Nestle and Kellogg plus retailers and recyclers, governments and NGOs, signed a pledge in late October to cut plastic waste from their operations.

The pledge – the New Plastics Economy Global Commitment – was launched by the Ellen MacArthur Foundation and the United Nations Environment Programme (UNEP) on October 29 this year. Participating organisations promised to eliminate single-use and unnecessary plastic and to recycle packaging, with targets to be reviewed and updates on their progress to be posted regularly to drive momentum.

In a move that shares the spirit of the new global pledge, civil society and private businesses in Hong Kong are campaigning for the “naked shopping” concept, where consumers choose to buy products that are not packaged. Patsy Cheng Man-wah, director of the SEE Network, a pioneer of the shop naked campaign, says the concept stems from the BYOB (bring your own bag) movement.

The goal of the campaign, says Cheng, is to arouse public awareness. “Everyone has a chance to be a consumer. But not everyone has a chance to participate in the decision making of government policies. Not everyone joins protests but everyone buys things every single day. And if you shop every day, can you be a bit more eco-friendly? The concept should help everyone to stop and think – am I willing to change?”

To promote the concept, they set up a community group on Facebook for people to share their experiences of naked shopping. They also collaborated with sixteen local businesses in the Central and Western District in hosting a “Shop Naked Day” last year, where a diverse range of unpackaged and handmade products were sold. Residents were invited to bring their own containers to the stalls and get their first taste of naked shopping.

Despite the positive reaction, Cheng says it is hard to sustain the momentum, and the ultimate solution requires a structural change of the existing waste-treatment system by the Food and Environmental Hygiene Department. “I don’t think there is a lack of promotion [on this issue from the government],” says Cheng, “There are not enough substantial policies and measures. The government should take this problem more seriously.”

In the “Hong Kong Blueprint for Sustainable Use of Resources 2013 – 2022” published by the Environment Bureau, the government listed “fill missing gaps in Hong Kong’s waste-related infrastructure” as one of the policy directions. Whether or not packaging materials will be listed under Producer Responsibility Schemes, where manufacturers have to share the responsibility of recycling and disposing of their products, is still under review. So far, plastic shopping bags, waste electrical and electronic equipment and glass beverage containers have been included under the scheme.

The absence of government policy support, however, does not discourage private businesses and consumers in Hong Kong from taking action against excessive food packaging. A handful of grocery stores have sprouted up around the city with this very aim.
One such store is Seed, a modern eco-friendly grocery store in Sai Kung. Belle Chak Yuen-chi, one of the four co-founders of Seed, says their name stands for “Saving the Earth Every Day”.

Opened in June this year, the shop offers a great variety of food products, ranging from parched fruits to jasmine rice and almond milk. Dried food items are stored in large glass bins and customers are encouraged to bring their own containers when they shop.
Customers can pick used plastic boxes and glass bottles donated by nearby residents if they forget to bring their own or if they are new to the concept of shopping naked. Consumers are charged HK$2 to HK$5 for each container, Chak says, to remind them of the value of these used bags and containers. “We want everyone to realise that a small step can help a lot,” she adds.

Chak believes everyone should shoulder the responsibility for the excessive amount of food packaging waste. People are too used to the convenience of purchasing packaged goods in supermarkets, even though such packaging is often excessive. “If 100 or 1,000 people stop going to supermarkets due to the packaging…if everyone has this awareness and steps back, then supermarkets and other manufacturers will be more aware of the issue,” she says.

She thinks people nowadays are pushing hygienic requirements to an extreme. For instance, restaurants in the past had sugar stored in a tin and toothpicks kept in a holder, but everything is individually packaged now.

Hygiene concerns sometimes make it difficult for consumers to buy unpackaged goods in some shops even when they are well-prepared with their own bags or containers. Carol Ho Kit-yee, a customer of Seed, who has been a devotee of naked shopping for a year, recalls an unpleasant experience of buying tea. She says a chain beverage brand in Causeway Bay once rejected her request of filling her own water bottle with green tea citing operational and hygiene concerns.

The incident shows that despite her good will, her environmentally friendly shopping habit is not welcomed in some places. Ho believes this has greatly undermined her right to select what suits her best. “I think participating in naked shopping is my right and my choice, just like I can choose whether to use plastic bags or not, and I am not forced to use it,” she explains. Ho adds shopping naked saves people the hassle of recycling because they can avoid producing waste by buying unpackaged products in the first place.

Raphaël De Ry, the founder of Edgar, was a food distributor before he became a shop owner himself. His solution to the problem of food packaging is buying in bulk, which he says allows both him and his consumers to “win all along the chain”. By working with manufacturers who use minimal packaging, the items he ships take up less space in shipping containers and that in turn helps reduce the carbon footprint produced during the shipping process. Purchasing products in great quantities, such as using ten-kilo bags as opposed to five-kilo bags, helps cut down the use of packaging materials. Customers who bring along their own containers and bags also eliminate the use of plastic packaging for their purchases.

His store, like Seed, also features a stunning array of glass containers labelled with product descriptions. De Ry points out that customers often rely on packaging to decide whether to make a purchase or not and they might feel uneasy if they cannot read the food information. “The packaging is something that is very reassuring … it gives like a sense of confidence in the purchase,” he says.

Though the unpackaged movement is picking up, De Ry says he still encounters setbacks in searching for zero-waste products. He recalls he once sourced some metal straws only to discover that they were each wrapped in plastic and enclosed in a ziplock bag.

In his Wan Chai store, De Ry says up to 40 per cent of customers bring their own containers and 20 per cent do the same in his Tsim Sha Tsui branch. He feels optimistic about the possibility of making a change, and he thinks the Hong Kong government should do more. “I think people are taking the lead. They understand that the government will not do anything so they have to do it by themselves,” De Ry says.