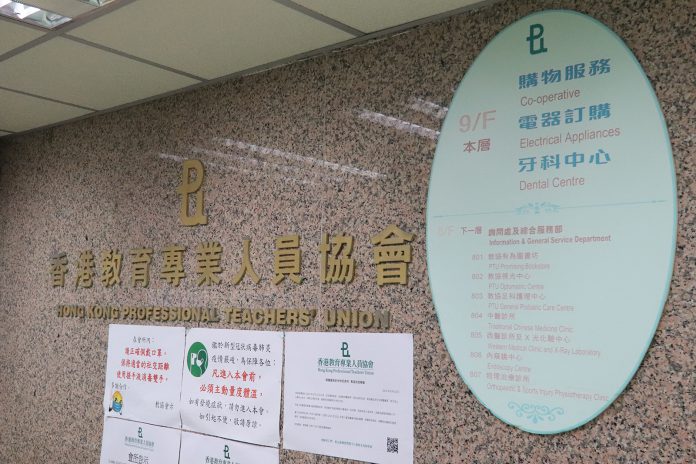 What does disbandment of experienced professional unions mean to political participation and civil society in Hong Kong?

Poon Tin-chi, one of the active leaders of the now-disbanded Hong Kong Professional Teachers’ Union (PTU) since its establishment in 1973, says that it never supported Hong Kong independence, citing that it supported Hong Kong’s return to China during the negotiations between China and the United Kingdom during the 1980s as evidence.
“Our founding chairman Szeto Wah was also a member of the Hong Kong Basic Law Drafting Committee. This shows that he is a true patriot,” he adds.

The Disbandment of PTU

The PTU came under fire on July 30 when Chinese state-run newspaper People’s Daily criticised the union for engaging in anti-China activities and called the PTU an “ulcer” that needs to be removed.

The next day, on July 31, the Hong Kong government announced that it would cease all working relations with the PTU, stating that it would no longer consult the union on education-related issues and would stop recognising teacher training courses organised by the PTU.

The PTU announced its decision to disband on August 10, citing “huge pressure from the recent developments” as the reason. The union facilitated disbandment by amending its constitution at a special assembly. The decision was formalised on September 11.

Poon, who has been the chairman of the PTU senate since 2010, says that the PTU participated in social movements because upholding social justice is one of its core values.

“The PTU has three main goals: to fight for teachers’ rights, to voice out on education policies and to defend social justice,” he says.

“We organise peaceful activities if the movement was related to social justice. We only mobilise our members to participate and never incited students,” he stresses.

Poon was also the union’s first secretary general from 1974 to 1990 and the vice-chairman from 1992 to 2006.
He says that the PTU has influenced the government’s education policies throughout its existence.

“For example, when the number of students started to decrease in the late 1970s, we advocated to implement small class teaching to enhance the quality of education. The government eventually accepted our suggestion,” he explains.

Poon finds the PTU’s friendly atmosphere to be most memorable.

“I remember when we helped our members to order gifts during Lunar New Year, our volunteers worked together happily, even though they were exhausted after moving the gifts around,” Poon says.

“And when our members received presents, they stayed around and chatted with us. It is not purely a seller-customer relationship, but a very warm and close one,” he continues.

Poon also praises PTU’s founding chairman Szeto Wah’s devotion to education and his down-to-earth working style. He passed away in 2011.

“I remember back in 1971, rubbish piled up in toilets after a carnival event. When Szeto Wah was aware of it, he went to the toilet to clean it himself,” he recalls.

Looking into the future after the PTU’s disbandment, Poon tries to stay hopeful.

“There is not really a basis for optimism now, but it is also not necessary to be negative. There is always hope, it just depends on how you interpret things,” he says.

“The union currently has fewer than 50 members. We will send invitations to teachers next month, and we hope that 10,000 FEW members and other non-FEW education workers will join us,” Ng Chi-wui, the vice-chairman of the union, says.

He also says that most of the members in the new union’s council met each other in the FEW, but stresses that the union will also include non-FEW members, including current and retired education workers.

“We are currently planning to form two new committees in the union, and have already invited some non-FEW members to be part of them,” Ng says.

The vice-chairman thinks that it is difficult to comment on the PTU’s disbandment but says: “We acknowledge that the PTU has made a lot of contributions to teachers’ rights throughout its history, but we cannot approve its actions that override education professionalism with politics, such as inciting teachers to participate in class boycotts.”

Ng’s remarks were similar to FEW president Wong Kwan-yu’s. Speaking to a RTHK radio programme on August 11, Wong criticized the PTU for not distinguishing itself from teachers with professional misconduct, as well as separatism and Hong Kong independence.

Ng says that the new union will not provide teachers’ welfare in order to avoid overlapping with services like shopping welfare that the FEW already has.

He adds that it will provide consultation and legal assistance in cases involving teachers’ rights, which explains why pro-Beijing lawyer and National People’s Congress representative Chen Man-qi is appointed the union’s advisors.

“We will not harbour any prejudices when dealing with cases involving professional misconduct, but will not protect teachers involved in illegal activities,” Ng stresses.

What Does the Disbandment Tell Us?

Ma Ngok, an associate professor from the Chinese University of Hong Kong’s (CUHK) Department of Government and Public Administration, thinks that the pro-Beijing unions will not be able to replace the PTU.

“Due to their political stance, it will be hard for these unions to build trust with the former members of the PTU. They are also relatively inexperienced when it comes to defending teachers’ rights and dealing with complaints, which the PTU was very experienced in,” he says.

The associate professor says that the PTU was targeted by the authorities due to its influence on Hong Kong’s social movement.

“The Central and Hong Kong governments alleged that the PTU incited teachers to encourage students to actively participate in the 2019 anti-extradition bill movement. This led to Beijing’s decision to deal with the union,” Ma explains.

Given the current political atmosphere, he believes that new unions with a pro-democracy political stance in the education industry will probably not emerge in the short term.

“The National Security Law and the social distancing measures under the pandemic created an unfavourable atmosphere for political activities. The limited resources of smaller pro-democracy groups also does not help,” Ma says.

Another commentator Lau Siu-kai, deputy head of the Chinese Association of Hong Kong and Macau Studies, says he is unfamiliar with the subject.

Bernard Charnwut Chan, the non-official convenor of the Executive Council, said on September 12 that he felt pity for the PTU’s disbandment, but stressed that no organisations should challenge “one country, two systems” under the National Security Law.

The convenor also believed that the disbandment of one or two organisations would not affect the development of Hong Kong’s civil society.

The US Department of State issued a press statement on October 21 expressing serious concern at the continued erosion of fundamental freedoms in Hong Kong and called on the Beijing and Hong Kong authorities to cease their crackdown on peaceful civil society organisations.