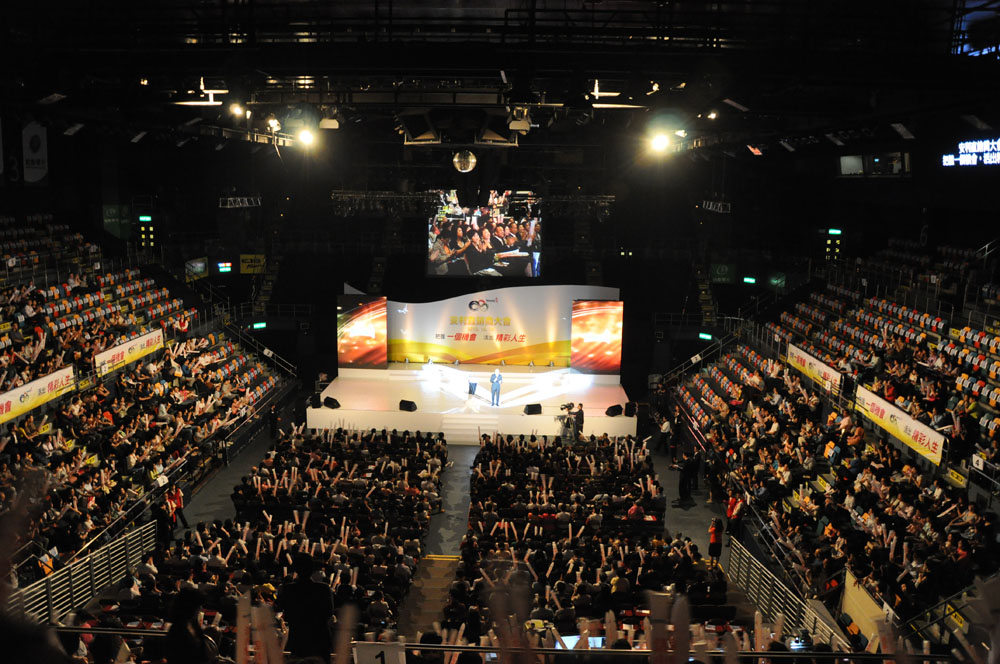 It has hosted cheering crowds for countless pop concerts and sporting events, but on this night, the audience is there to see different kinds of stars. One woman is frantically pressing the record button on her recording pen as 2,000 pairs of inflatable clapping sticks whipped up the atmosphere further. As the night draws to a climax, a voice booms out: “If you follow a fly, you will find a place to pee; if you follow a bee, you will find a tree; and if you follow Amway, you will find the successful key.”

The arena erupts in applause as the direct selling company’s Hong Kong Crown Ambassador, Anita Fu marches off the stage. This accolade is the highest achievement for Amway’s sales agents – who are known as distributors. The event is the Amway Distributor Rally and standing on the stage is the latest batch of what the company calls Gold Producers. This is the third highest level for Amway distributors and Gold Producers get to pocket 12 per cent of the value of their sales.

Some of these Gold Producers are still in their 20s; many started their Amway careers while still at university. Among them is Chan Sze-man. Chan, who is 24, studied journalism and communication at university but took a different career path after graduation. She now has a full-time job in sales and marketing, and uses her remaining time working as a part-time direct selling distributor of Nutrilite products under Amway.

Direct selling refers to the marketing or selling of products directly to consumers in their homes and workplaces. The people doing the selling are called distributors and they introduce their products through one-to-one and one-to-group demonstrations. These distributors see their operations as an independent business, although they also work as teams.

The world of direct selling has its own vocabulary and jargon. Distributors call the people they introduce to the business as their “down-lines” and those who introduced them as their“up-lines”. When down-lines make sales of a certain level, their up-lines will be awarded a percentage of their sales amount. This is known as “passive income”. The higher the sales, the higher the percentage the up-line gets.

Chan was first introduced to direct selling by her university roommate and has now been in the business for three years, In her best month, she achieved sales of $130,000 and was given a $15,000 as bonus. She says this business is an excellent part-time job.

“No other part-time job can bring you extra income of more than $10,000,” says Chan. “It is more than the salary of my full-time job.” Chan says the products she sells are inexpensive, everyday goods, so the turnover is very stable.

Chan goes further, and says being a distributor helps her to achieve her dreams. “I can build my own career instead of working for my boss’ dream,” she says. “I want to save time to take care of my family, so why not work harder for a few years so I can enjoy life later?” Last September, she paid for her family to take a trip to Beijing, an impressive feat for a just graduated employee.

At the same distributor rally, a 21-year-old university student sits in the auditorium, looking forward to being one of the people on the stage next time. Tsang Wai-ling is a third-year student of nursing at The Chinese University of Hong Kong (CUHK). After experiencing the intensive internship training for nurses, she decided the job is far too demanding.

“Nurses make a good salary and the income is stable, but you have to work under great pressure,” she says, and that is why she will first consider direct selling as a full-time job after graduation.

“The working hours are very flexible. You are not pressured to achieve a quota.” Tsang lists the advantages of taking part in direct selling, “There is a lot of training provided, including communication skills, leadership training, as well as knowledge about the products, to help you introduce products to friends.”