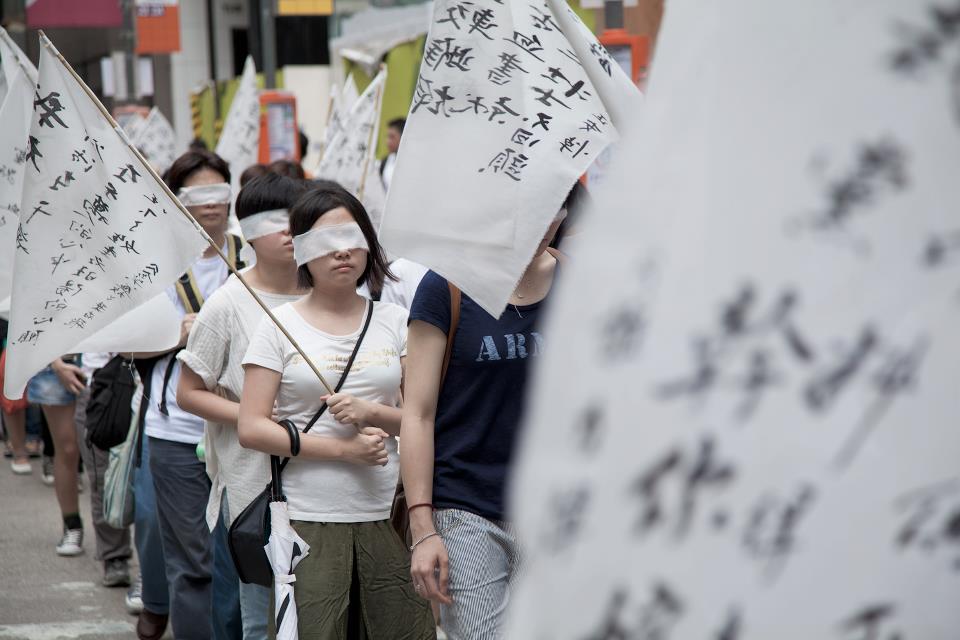 In April 2011, Chinese political artist Ai Wei-wei was taken into custody by Beijing authorities. He was secretly detained for 81 days, sparking international outcry and protests in Hong Kong.

Ai’s detention seemed to galvanize artists in Hong Kong, who had been introducing political elements into their art works in recent years. His face began to appear on Hong Kong’s streets in Banksy-like graffiti.

Art Citizens was founded after Ai was detained. The group gathers artists to “fight against all kinds of ambiguous censorship towards artistic practice, and to develop different forms of expressions creatively”.

Founder, Kacey Wong-Kwok choi had been determined not to create politically-related works. That changed after Ai was arrested, but Wong still chooses humour to express his political views. For example, during the July 1st protest last year, he called himself the “Real Cultural Bureau Chief” and steered a pink tank named the Cultural Bureau.

The suspicious death of the former June 4th dissident and Hunan labour activist Li Wang-yang in June 2012 prompted another wave of protests. In one rally, protesters calling themselves “We are all Li Wang Yang”, tied white cloth over their eyes and read poems to mourn for Li, while others played music.

Kitty Hung Hiu-han was one of the organisers of the event and is an editor of the Chinese Literature magazine, Fleurs des Lettres. Hung’s preferred method of delivery for political messages is poetry as she believes it is a medium that manages to be both succinct and provides room for multiple interpretations..

Other artists choose other forms. Fong So, a former journalist who is now a Chinese painter, agrees with Aristotle that “Man is by nature a political animal”. He thinks it is important to tell the audience the truth, while they may interpret some more meanings than the artists overtly provide.

As a form of protest, art can take on many forms. It can be challenging and provocative and it can be subtle or direct. Unlike ‘conventional’ political protests and speeches, the art of protest is more abstract and ambiguous. It leaves room for audience to have different interpretations. Sometimes, the abstract nature of the work may mean it can avoid being censored heavily as the meanings may be too subtle to judge.

Historically, there has always been a relationship between art and politics. For some artists In Hong Kong, art has become a form of protest.