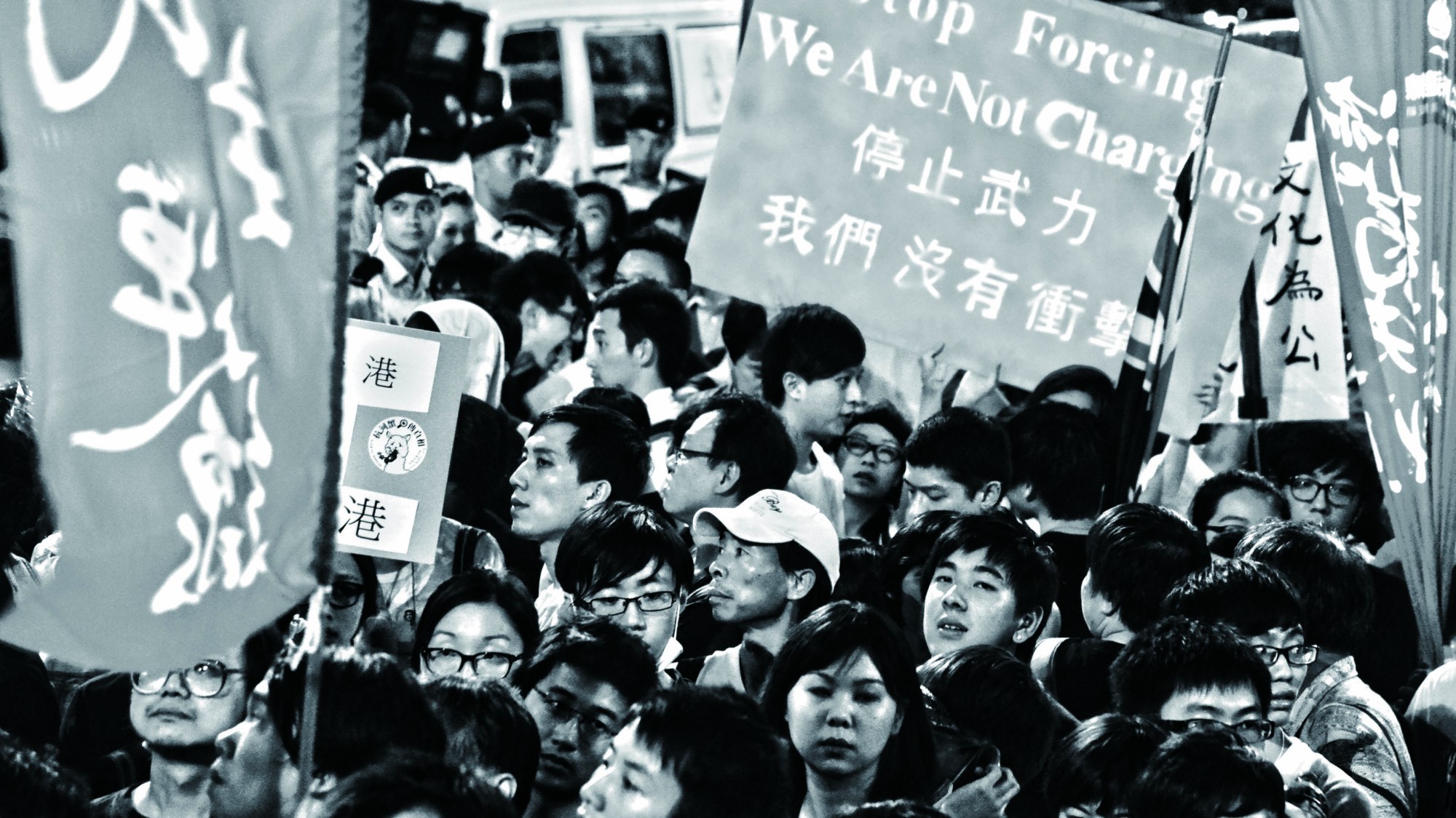 By Pash Chan and Cindy Ng

Those were the words Tam Tak-chi, a radio host and activist better known as “Fast Beat”, heard as he tried to make his way towards his fellow protesters on Queen’s Road in Central. Before he reached them, several arms lifted him straight to a squad car. Enraged protesters blocked and shook the vehicle, demanding that the police release Tam. While the police officers beside Tam looked on nervously, Tam was calm, even though he knew he may well be imprisoned for “unauthorised assembly”.

Just two blocks away on Ice House Street, a lone protester stood in the centre of the road. Legislator Leung Kwok-hung, or Long Hair, was surrounded by hundreds of policemen. As he yelled, “Leung Chun-ying!” people standing outside the police cordon shouted back, “Step down!”. After an hours-long stand-off, Leung was arrested at midnight, ending the New Year demonstrations, of striving and failing to bring about democracy, some protesters’ patience has been exhausted. Occupying public spaces, paralyzing traffic and other physical confrontations have become more frequent.

For them, working for political reform in the Legislative Council (LegCo) is just a naïve dream. Only half of the seats are elected by one-person-one-vote through geographical constituencies, while the other half are elected through “small circle” functional constituencies. The system consistently gives the pro-establishment camp an upper hand, even though it does not win as many votes as the pan-democrats. The advantage is compounded by the split-voting mechanism which means that private members’ bills and motions must be passed by a majority of lawmakers from both sets of constituencies.

Frustration over the limits of what can be achieved within the system has sparked debate over whether the quest for democracy needs to be fought outside of the system instead. The question has split the pan-democratic camp and its supporters and extends to the debate in the media and among ordinary citizens.

Leung believes the only way to abolish the unfair system is for protests to intensify. Ever since entering the legislature in 2004, Leung has been famous, or infamous, for deliberately breaking rules, from throwing bananas and letting off helium balloons inside the LegCo chamber to carrying paper coffins to functions he was invited to attend as a legislative councillor. He was also an organiser of the filibuster to derail government policy.

For the legislator who won the most votes in his geographical constituency in the 2012 LegCo election, it may seem ironic that Leung views LegCo as just a platform to create noise. But he believes every time he steals the spotlight in meetings through his disruptive behaviour, he makes a slight difference.

“Similarly, any single protest cannot correct our society, but you would still take part. Every protest is to accumulate the power for changes,” Leung says.

His commitment to his cause has landed seven days for disrupting a LegCo session with then Chief Executive Tung Chee-hwa. Before he was charged with unlawful assembly in the New Year protest, he was already appealing a two-month jail term for disrupting public order during protests at a 2011 consultation over government plans to scrap by-elections for vacant LegCo seats.