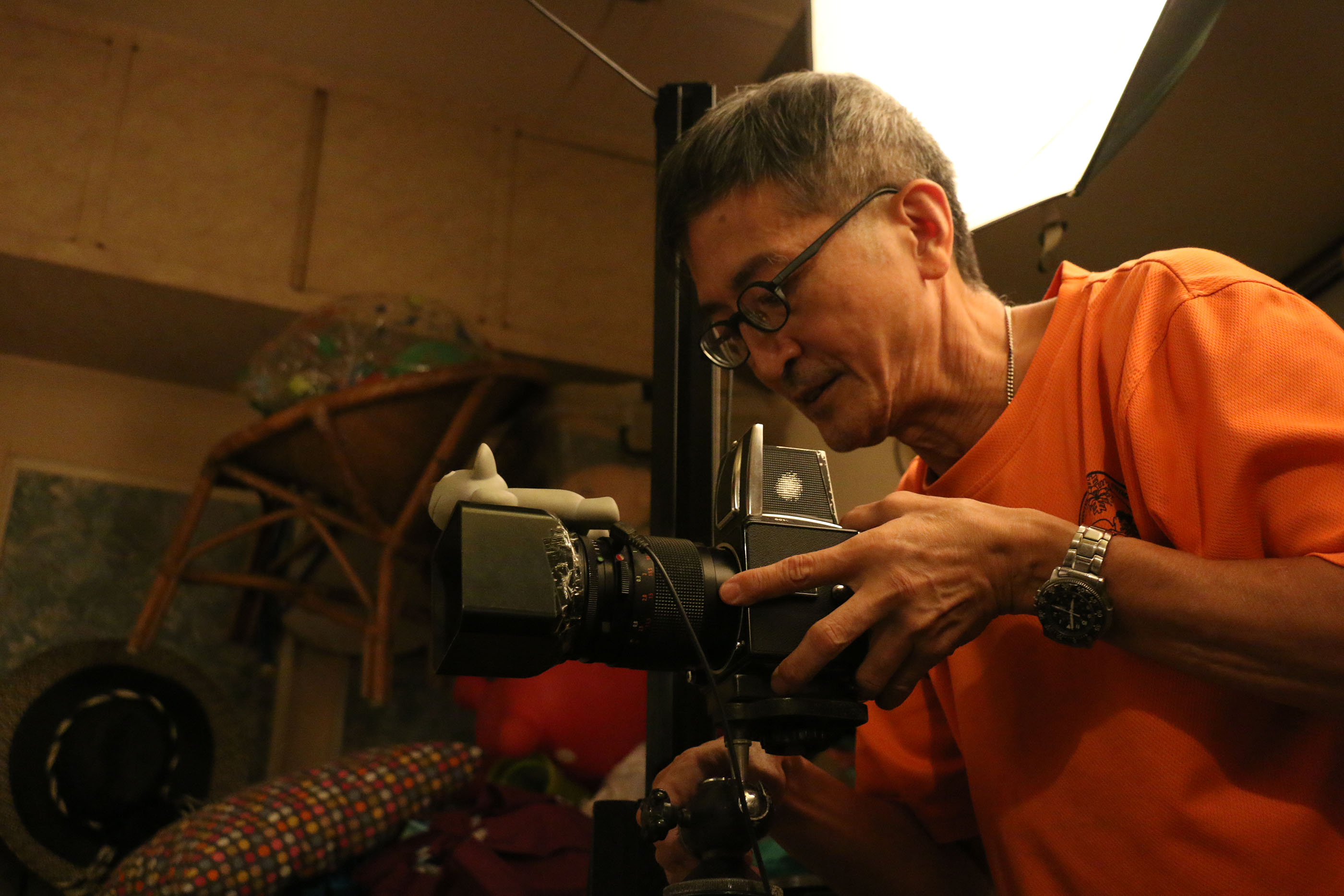 A collection of old cameras sits in the corner of a Kowloon photo studio. They belong to the 66-year-old film photographer, Lam Kwok-shing, the proprietor of Sammy Photo Studio, located on the second floor of an old walk-up building in Yau Ma Tei and one of the few film photo studios left in Hong Kong.

Every day, Lam commutes from Tseung Kwan O to Pak Hoi Street, unlocks the glass door of the studio, and starts waiting for his customers to come. However, there are days when the customers do not come, days that are becoming more common with each passing year. Today, Lam has waited for a whole day but no one has arrived. “It is like waiting for a friend. They have promised that they would come back to take photos, but you don’t know when they will come,” says Lam. “The waiting process is cruel.”

Lam describes operating a film photography studio in this day and age as “painful”. He says the age of film technology has passed, yet he continues to run the business just so he can wait for his customers to return.

“This industry was so vibrant,” he says. “Nowadays, digital cameras have become mainstream. It is like a mighty torrent washing away film cameras.” Since the development of digital cameras, many studios have switched to using modern photography technologies. Film photography, being more expensive and time-consuming, does not appeal to the new generation.

Of those who do use film these days, many will back them up in digital form but Lam thinks it is a waste of film if you do not process it in the dark room. “I told them if they are outputting the photos on CD, it’s digital already; why don’t they use digital [cameras] instead of wasting the film?” Lam says.

Film photography means more than the physical photographs themselves, its value is linked to the memories and feelings those photos elicit. Lam recalls how people used to prepare to have their photographs taken, getting dressed up to pose for family photos.

He remembers the first time he had his photo taken in a studio in 1954. The photographer’s antique wooden camera captured the five-year-old Lam with his eyes half-shut.“ I didn’t like the photo at first because my father started calling me a moron when we received the photo,” Lam says.

Lam says that in the past people had a stronger sense of family than now. Cameras were luxury items and few families had their own, so they would have their photos taken in studios, especially during festivals. To illustrate the point, Lam takes out a stack of black and white photos from his wooden cabinet and carefully selects one. The picture freezes the memorable moment when Lam fought with his older brother over the bicycle prop in the renowned Jim Jim Studio on his younger sister’s birthday. This photo was later hung in Lam’s home.

The picture was taken by the studio’s boss, who later became Lam’s boss. At the time, Lam could never imagine he would one day take over Jim Jim studio and rename it as Sammy Photo Studio. Lam had been at Jim Jim for 24 years, working his way up from a darkroom apprentice, when his former boss retired and left for Canada in 1995. Now, he not only runs the studio but is also the photographer.

But being a photographer was never Lam’s goal. “Because I didn’t want to deal with people. The world is malicious but the dark room is where you can escape from it,” says Lam. The anonymous comfort and magic of the darkroom were among the reasons he chose to enter the trade.
Lam was not a good student in his school days, he got a ‘G’ for English Language the first time he took the Hong Kong Certificate of Education Examination. Although he retook the exam, he did not do much better. After two rounds of disappointment, Lam followed the prevailing thinking of the time which was: “If you can’t make it in school, learn a trade.”

This was the era when technical skills in most industries were learnt through apprenticeships. As an apprentice, Lam worked at the studio from 10 a.m. to 10 p.m. every day, he ate his meals and slept there with other apprentices too. “Spending so much time in the studio, I felt like I had become a part of photography,” Lam recalls.

Lam mentions that many people in the 1970s believed in the dictum “respect your job and enjoy it”. For Lam, his boss epitomised that spirit. As the photographer-owner of Jim Jim, it was his goal to capture the moment when customers were smiling the most beautifully and naturally. He even took a child psychology course to understand more about how children think so that he could take a perfect picture of them.

The boss required all his staff to pay meticulous attention to detail in producing perfect photos. He separated the work of producing a single photo into four stages including photo-taking, photo-printing, photo-amending and film-amending. His exacting requirements produced high-quality photos that kept customers coming back. They are still coming back, even now.

Lam stands by the old working methods and standards although the field of studio film photography keeps shrinking. Many have left the industry and have switched to other fields of work to make their living. As a result, Lam’s studio lost its photographers and photo-amendment and film-amendment technicians.

This is why Lam started working outside the darkroom as a photographer and doubles up as a photo-amendment technician, leaving the work in the darkroom to his apprentice, Shek Kwai-nam, who still works in the studio as a part-time darkroom technician.

He explains that job satisfaction comes from his customers’ appreciation. It is why he waits. When Lam’s customers come to pick up the developed photos, their smiles and satisfaction bring him happiness.

“The couple said the photos taken by other firms in outdoor scenes looked as if they were photoshopped into the scene,” says a smiling and satisfied Lam.

Another time Varsity visited Sammy Photo Studio, Alice Lam Chui-lin, a member of the Eastern District Council1, came all the way from the Eastern District to Yau Ma Tei to find Lam Kwok-shing. She wanted him to take her publicity photos for the upcoming district council elections. Lam said she did try other digital photo studios after her last visit to Lam, but was dissatisfied with the quality of the photos.

On her last visit four years ago, Lam had already told her how hard it was to run a business in a sunset industry. He has to pay for water, electricity, wages for his part-time employee who helps in the dark room and rent to his old boss. Every customer is crucial to the studio’s survival, Lam says. “Boss says that if no one comes any more, the studio will be turned into subdivided flats. The reality is just like this.”

Lam did once consider changing his job. He attended a training course and obtained a license to be a security guard. However, people were reluctant to hire a new employee of Lam’s age. “You need to at least get another industry to accept you,” Lam sighs. “It was heart-breaking.”

Many people find it romantic that Lam insists on using film cameras and darkroom developing in his studio. But he says the reasons are more mundane – there are still old customers looking for film photo studios and he does not have enough gear to switch to digital photo-taking.

Lam keeps going back to his aim of “waiting for his customers”, some of whom still refer to the studio as “Jim Jim”. He knows the glory days are gone, and will not train any new apprentices. There is little market demand and film technology is becoming obsolete, he says. But for now, he will keep on waiting for his customers, until they stop coming back.