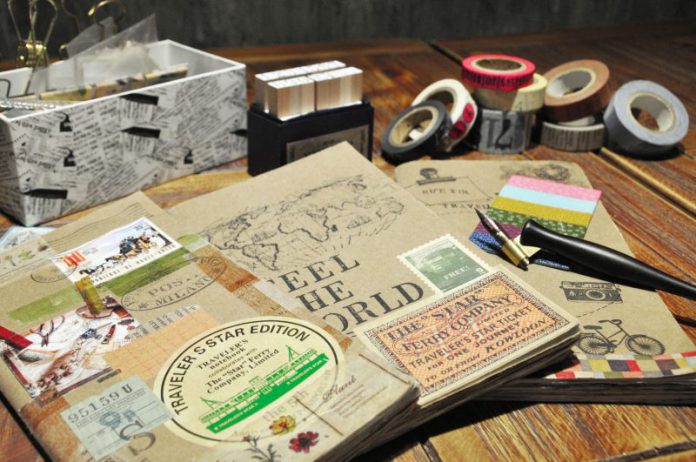 A young woman sits at a table in the corner of a café, carefully writing in her journal with a fountain pen. She clips the leather-bound notebook shut after completing a few sentences and searches for stickers on a table scattered with stamps, rolls of fancy tape, memo pads, and watercolour brush pens.

Susie Hu Ruixin began journaling while on a student exchange in Austria two years ago. Hu felt something was missing in digital photos: they could not help record her feelings.

“At that time, I had a lot of travelling experience, and I started to think about how to organise it,” Hu says.

Like many other journal keepers, Hu, now 22, started out using the produced by Japanese stationer Midori. The original concept behind the notebooks was the appreciation of daily life as if it were itself a journey.

“You pay more attention to the details surrounding you, like collecting all the name cards, postcards in restaurants and attractions,” says Hu. She puts seemingly mundane items such as bus tickets or paper packaging into her journal because they prompt fond memories.

When she returned home from Austria, Hu’s grandfather embraced her Traveler’s Notebook as a treasure.

“He was really impressed and kept it as a very valuable gift for him. He pored over every picture and word,” she says.

His appreciation fuelled her growing enthusiasm for sharing her notebook. Last year, she started sharing her tips on journal decorating on the Chinese microblogging service Weibo. One original trick she devised involves using powder eyeshadow to create a singed page-edge effect instead of using real fire from a lighter to burn the paper. Hu’s Weibo account now has more than 58,000 followers, and has attracted advertising from some famous stationery and watch brands.

Although journaling is a hobby that utilises physical objects in the real world, social media plays a big part in spreading its popularity and connecting enthusiasts. Carmen Ho Sin-hang, who goes by the name Che Che on Instagram, has 6,000 followers on the social network. She is an 18-year-old decorative tape lover and designer who regularly shares posts about tape and her journal.

Ho started collecting tape in secondary school and uses it to decorate her journals. After her latest tape design was released – a vintage design featuring bus tickets – she got the idea of organising a tape market. She managed to gather 40 stalls through Instagram and attracted three times the expected number of visitors.

“I organised the market not just for buying and selling. I also wanted to give people a platform to exchange ideas,” Ho says. She hopes to encourage them to share their work, and appreciate others’ work. To that end, she set up an exchange zone where people could chat and display their work, and where tape, stickers and stamps were provided for free.