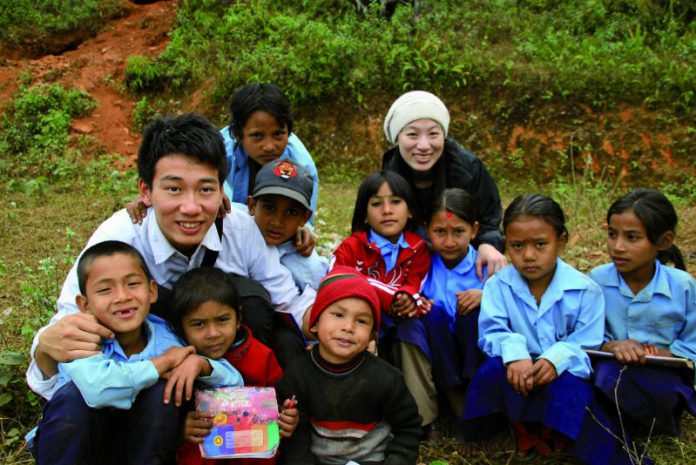 Today, the idea of “voluntourism” or volunteering on overseas projects while travelling is no longer new to Hong Kong youngsters. But for 32-year-old Bird Tang Wai-wing, a random conversation during a chance encounter in Tibet 10 years ago opened the gateway to what has now become his passion and his work.

On a backpack trip with his college mates, Tang came across a fellow Hong Kong traveller, Pink Lee Wai-ki, while they were renting bicycles in Lhasa. Lee, who later went on to found the charity Light On, was the person who first told Tang about work camps, also referred to as “workcamps”.

The idea of work camps originated after the end of World War I, when German and French youths worked together to rebuild a war-damaged area in France. Their actions inspired more people to work for peace across boundaries. Over the years, the idea has spread from Europe to all over the world.

Through Lee, he met another traveller who asked him: “Have you travelled alone? You must try it once. It is a must in life!”

Tang was doubtful at first but followed through on his new friend’s suggestion, making a solo trip to Yangshuo in Guangxi province.

The experience is still fresh in his memory. “It was awesome. I could breathe the freedom. There is a lot of uncertainty in a solo trip but it also means unlimited possibilities. Breaking through the normal routine in Hong Kong, the world suddenly got much bigger.”

After a few more trips, Tang was no longer satisfied with being a tourist. “No matter how great the trip is, there is no way for me to really mix with the locals,” he says. “The locals are the hosts while the tourists are the guests.”

He says tourists can never be in touch with people at the grassroots because they do not have the ability to be hosts. He realised that doing voluntary work is a better way to interact with locals and to experience their lives. That was when he remembered work camps.

In 2008, Tang volunteered for two weeks at a remote orphanage in Mongolia, an experience he has described as “life-changing”. As there was no work-camp organisation in Hong Kong, Tang and his friends set up VolTra in 2009. The name could not be more straightforward – a combination of volunteering and travel.

The first work camp VolTra organised was at the Fresh Fish Traders’ Primary School in December 2009. Tang brought around 15 volunteers from Korea, Russia, Japan, Taiwan and France. The volunteers made artworks and performed at some elderly homes with the pupils, many of whom were from low-income families.

The school’s then principal Leung Kee-cheong accepted VolTra’s invitation because he wanted to “bring the world” to the children as they have little opportunity to go abroad.

This kind of empowerment is exactly what Tang wants to achieve through work camps. He himself had a difficult childhood – his family lived on welfare payments because his father had suffered an industrial injury and his mother struggled with post-natal depression. He understands that grassroots children need more than material support.

“They do not need money, but vision and to connect with the world,” he says.

He describes work camps as being a form of informal education. Tang thinks everyone should have three qualities  – curiosity, empathy and a willingness to accept changes – and two kinds of consciousness – local awareness and global awareness.

These are values Tang thinks cannot be taught in classrooms and he finds it absurd that teachers tell students to have curiosity and empathy. He thinks people can only understand these qualities through experiencing them. “People always think that education is about someone teaching. But in fact, education does not necessarily require the presence of teachers,” he adds.

Tang thinks Hongkongers’ qualities and worth are suppressed. Although we are intelligent, he says, we lack insight and confine ourselves to the limits of our small city. That is why Tang wants to help people go overseas to broaden their vision of the world and perhaps find change in themselves. He compares his work to sowing seeds. There is no guarantee the seeds will germinate but he is patient enough to wait and see.

Tang thinks the work camp is the ideal type of voluntary work because it adopts a  bottom-up and needs-based approach. It is local groups who initiate work camps and volunteers are then recruited internationally.

Sometimes Tang sees overseas service trips initiated and planned by Hong Kong people. He disagrees with these because he believes it is impossible for foreigners to truly understand the needs of the local people. He says top-down projects are likely to fail and cites reports about mainland schools built with funding from Project Hope. The reports say the buildings lay idle and became waste collection sites because they were built in the wrong locations where there were not enough students.

Tang says it is easy for funders to make such mistakes; they think they have the right to make decisions as they have the money. He adds volunteers need to avoid being bossy and ordering the locals around – things that work in one’s home town may not work in another environment.

In some cases, volunteers are even a source of bother to the local people. The community has to prepare supporting facilities, which they do not need, solely for the volunteers and they have to provide extra accommodation and food. In some projects, volunteers may actually hinder the work. Tang cites the example of some traditional projects where volunteers helped to build bridges in remote areas but were unused to the type of labour required.

Even when work camps are initiated by local groups and are beneficial to both the people served and those serving, volunteerism is still open to criticism from those who say the volunteers are “buying” voluntary experience.

Tang acknowledges this criticism, especially as most of VolTra’s target customers are new to work camps.

“Long-term volunteers are valuable. Short-term volunteers, to be frank, join to learn something from the experience more than helping others,” he says.

While some are critical of work camps as a bespoke experience for privileged young people from the developed world, others have questioned why volunteers have  to pay to serve. Tang thinks this is a misunderstanding arising from semantics. In Hong Kong, the term “volunteer” is translated to 義工, meaning someone who works without payment. Yet, Tang prefers the Taiwan translation of 志願工作者, which means someone doing the job that matches their aspiration. VolTra acts as a middleman which does the matching. This process incurs costs so Tang thinks it is reasonable to collect money.

But he adds there are occasions when VolTra gives free volunteer quotas. The organisation has cooperated with some corporations to hold competitions and training programmes where winners and participants may be exempted from paying the fees. But he says there is no real free ride for participants and they shouldn’t expect it.

As VolTra has grown in scale, the organisation faces different challenges. The thing that concerns Tang now is how to remain competitive and attractive in the face of new platforms such as the cultural exchange and gap year volunteering site Workaway.

Tang acknowledges VolTra’s operation model is less effective and outdated because it relies on working with an international network of work-camp organisations. Therefore, the process of handling feedback from participants is very slow. Tang worries this may drive younger participants away. He will work on changes to improve operations.

VolTra’s success means Tang no longer has time to take part in work camps himself. His role has changed from being a participant to an organiser but he is comfortable about the change.

“I hope more people can experience what I experienced. I hope they can feel the touching moments I felt.”

Tang’s goal has not changed over the years and another thing that remains unchanged is his adventurous spirit.

“Although I am not leaving Hong Kong, I am still wandering,” he says. For Bird Tang, running VolTra is similar to travelling. There will be a lot of uncertainties ahead but Tang will embrace them and journey on.