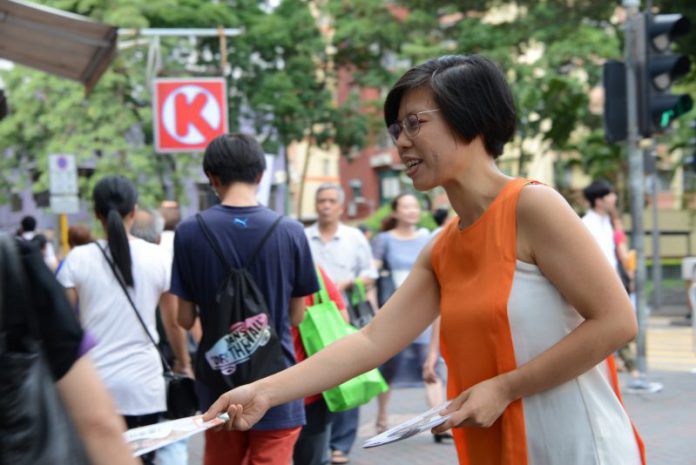 There were just two days to go until polling day on Sunday,  September 4. A record number of candidates were contesting seats in the first Legislative Council election to be held after the Occupy Movement of 2014. Competition was intense as the non-establishment side presented a crowded field of pan-democrats and post-Occupy candidates.

Suzanne Wu Sui-shan was flanked by members of her party as she fought back the tears and stopped her voice from breaking. She calmly announced she would stop campaigning. The Labour Party chairwoman lowered her head and apologised to her supporters, setting off a chorus of camera shutters. Wu’s announcement kicked off what became a series of similar tactical “quit campaigning” decisions by pan-democrats that Friday. Suddenly, she was the talk of the town.

The 36-year-old candidate in the Kowloon East constituency was a relative unknown in politics before the election. But she had in fact spent more than a decade on district work and in the labour movement. In December 2015, she was elected to succeed veteran politician Lee Cheuk-yan as leader of the Labour Party.

Wu has not always aspired to be a politician, or even a labour activist. In her second year of secondary school she read The Great Tangshan Earthquake, an acclaimed work of reportage by the Chinese journalist Qian Gang. Wu was struck by the power of words and resolved to become a journalist. With this in mind, she enrolled in the Language, Culture and Communication degree programme at Hong Kong Polytechnic University (PolyU).

At PolyU, Wu joined the student union and became the external vice-president. This brought her into close contact with the security guards and cleaners at the university. After learning about their hardships, Wu began to realise that bringing about social justice should begin with changing the small things in everyday life.

“I wanted to take a further step to change society, so I participated in social movements,” she says. “I didn’t want to just witness and question, but also to engage.”

This impulse led Wu to choose to be an activist rather than a journalist.

Immediately after graduating in 2002, Wu joined the Hong Kong Confederation of Trade Unions where she mainly dealt with outsourcing issues at tertiary institutions. Her work took her back to her alma mater, where she protested outside the office of the vice-chancellor to demand an end to outsourcing.

She did not end outsourcing, but there was a victory of sorts. The university established an outsourcing management company, the cleaners got an instant salary rise from HK$4,000 to HK$6,000, and the security guards’ work shifts were shortened from 12 hours to eight hours a day.

“It was a good start. I could feel the power of change,” Wu says.

Such outcomes are what Wu loves most about her work. She fondly recalls the case of a dish washer who sustained a work-related injury seven years ago. The worker was too timid to ask her manager to report it as an industrial injury. But seeing Wu arguing confidently with the manager, the woman gained courage. Since then, she has become unafraid to defend her rights and is able to tackle many problems independently.

“Stories like this make mass organisational work special. Through interpersonal contact, you can actually change a person’s life,” Wu says.

In public, Wu is seen as a tough negotiator and a battle-hardened activist, but she also has her tender side. At the height of the SARS crisis in 2003, she delivered bunches of roses to cleaners at one of the centres of the outbreak, the Amoy Gardens residential estate. Wu thought that while society heaped praise on medical workers, it overlooked the contribution of cleaners. For her, the roses represented dignity. “I hoped the neglected grass-roots workers could get the dignity they deserved,” she says.

Besides labour rights, Wu is particularly devoted to women’s issues, which she thinks are often seriously overlooked or belittled. She says some people equate women’s issues with child-care support alone. Others have suggested she should try to tackle the issues at district council level only. But Wu disagrees, saying women’s issues need policy support, which exceeds the authority of district councils.

Instead of singling out women’s issues, she believes there is a need to implement “gender mainstreaming” which involves introducing gender perspectives into every social issue. For instance, when talking about the Mandatory Provident Fund Schemes (MPF), society tends to forget that many women, whether they work as domestic helpers or as homemakers and carers in the home, are not covered by this retirement protection scheme. Another example is in discussions about the poor living conditions of subdivided flats, people are unaware that it is often women who suffer the most.

Wu stood in the September election to bring the voices of women and the grassroots into the legislative council and to fight for more resources. At the same time she saw an urgent need for generational renewal within the Labour Party after the district council election last year.

“I want to lead the generational renewal [of the Labour Party], so I stood first on the candidate list instead of standing behind the legislators who aimed to be re-elected,” she explains.

However, the polls consistently showed she did not have enough support to win a seat. Around a week before polling day, the media and some of her volunteers started to ask her to consider stopping her campaigning. She thought about it but was unconvinced.

“Who would I have backed after I gave up? I didn’t think there was any choice left,” she says. Although she had nothing against the other pro-democracy candidates, she did not think any of them had the links to the grassroots and workers’ movement that she did. As someone who could bring the voices and insights of civic groups into the legislative council, she felt she was a qualified candidate.

Then, a few days before the election, Wu began to hear from residents who told her they were struggling over who to vote for. Some supported Wu, but also wanted the pan-democratic camp to win more seats. Some even said they did not want to cast their votes because they could not decide who to vote for.

Wu’s first thought on hearing this was that she could not let this happen. She told herself the turnout rate had to be very high this year because it was the first Legco election after the Umbrella Movement. So she decided to stop campaigning to show the voters that the pan-democrats were united and to consolidate the vote so other pan-democratic candidates would stand a better chance.

Wu says she made the decision quite quickly and without much internal struggle. The only thing she considered was the greater public good.

“If I considered the possible loss or outcomes, I wouldn’t have dared to do it,” she says.

It was rough on her volunteers. One of them cried uncontrollably when she saw Wu’s picture on the ballot paper. Her tears fell onto the paper and she just randomly picked a pan-democrat candidate.

To make sure her action was meaningful, Wu kept checking the turnout rate every hour on election day. She was as nervous as a student waiting for the release of public examination results. She was relieved that the turnout rate reached a historic 58 per cent although the pan-democratic camp did not win one more seat in the constituency. She was slightly disappointed but not surprised.

Wu understands her decision will come back to haunt her and others will question her credibility. “It is a political suicide. Whatever constituency you are in at the next election, people will use it to attack you,” she says. Still, she does not regret her decision. Nor does think she made a sacrifice, only that she did what needed to be done.

After the election, she talked to voters, some of whom gently criticised her, but she thinks there were more who showed understanding. Some patted her on the shoulder, saying “Keep fighting!” or “I support you!”. She has apologised to the voters that she feels she has let down but has vowed to continue her commitment to doing district work. She believes there is no better way to prove her determination than through her actions.

The legislative council election and the election drama are behind her now. Looking back, Wu acknowledges the decision to run was a bit rushed and her political foundation was weak. She saw how difficult it was to boost her public recognition. Voters did not have enough time to fully understand her and her ideals.

In the instant that she announced she would stop campaigning, Wu had already decided to run in the next legislative council election.

“I lost a battle but I will not give up on the entire war. I just retreat temporarily and will continue to fight,” she says.