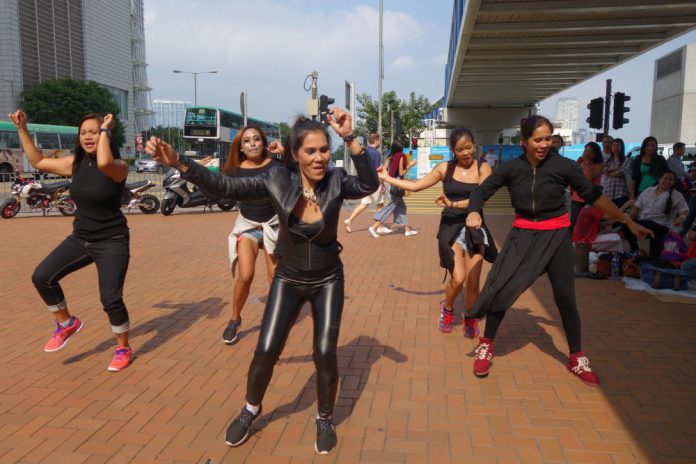 The number of foreign domestic helpers in Hong Kong has been steadily climbing, reaching 340,380 last year, a 24 per cent increase compared with five years ago. But although they are a part of the lives of many working families in Hong Kong, many people still stereotype domestic workers them as poor and uneducated. When they are in the news, it is often in negative context – either it is about them cheating or stealing from their employers and abusing their wards, or it is about their employers mistreating them.

However, domestic helpers are not that different from us. They have friends and families, and enjoy a rich social life on their days off.

Michelle Saluta, 37, came to Hong Kong a year ago. She started a dance society and practices with her team every Sunday. She’s been dancing for more than 10 years, starting from when she was at university in the Philippines. She thinks dancing can provide a release from work pressure and help her bond with her friends. Saluta likes to make the most of her single day off every week. “We have to enjoy it rather than sitting down [and being] sad,” she says.

Beyond their daily household chores, Filipino domestic helpers in Hong Kong enjoy communal life with their compatriots. Leo Selomenio, a domestic helper who came to Hong Kong in 1996 and founded Global Alliance ten years later, contributes her weekends to organizing activities for her fellow domestic helpers. Although she faces many difficulties such as the lack of time and financial support, her employer supports her endeavours by letting her have two days off on weekends. “Wherever I go, I may be back to Philippines for good, I will never be able to forget my employer because they have already become a part of my life,” she says.