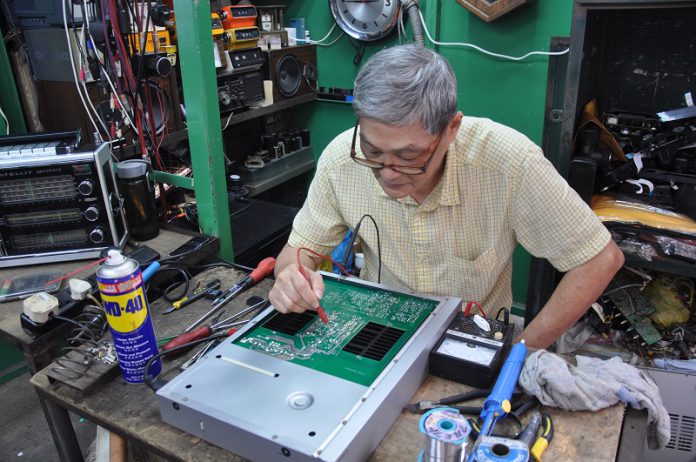 DIY enthusiasts insist on repairing, rather than tossing old stuff away

Apliu Street in Sham Shui Po is lined with shops and stalls selling electronic components and parts for appliances. But it is getting harder to find any that will also do repairs. Mr Ma, who is in his sixties, is one of the few handymen who still repairs appliances for a living.

In a run-down stall with signs that read “repair old sound equipment”, Ma is fixing a speaker, screwdriver in hand. He has been doing business on Apliu Street for more than 40 years and over the years, he has noticed that people are less willing to get their appliances mended.

In the past, a new electrical appliance would cost a big chunk of a workers’ monthly wage, so they would use it for as long as they could – decades or even most of their lifetime. In contrast, consumer goods are now much cheaper in real terms and people tend to discard things without much thought when they malfunction or break.

Ma says that even when people do want to fix their old appliances, it has become harder to do so. Most production processes are now automated and use machines whereas appliances tended to be assembled by workers in factories in the past.

The new appliances are more complicated, and are difficult to fix using simple tools, says Ma. Sometimes he finds it difficult to disassemble the appliances, let alone fix them. “Even if you want to fix it, you basically can’t,” he says.

Alung Wong Chun-lung, an experienced electronics engineer, has the same problem as Ma. Wong volunteers for a post-Umbrella Movement group that helps people in the community to mend electrical appliances – Fixing Hong Kong. People take their malfunctioning appliances to be repaired at the The House of To Kwa Wan Stories, in Hung Fook Street, Kowloon, where the group is based.

In the cramped store room where Wong works, household appliances, such as electric fans and induction cookers, are stacked up waiting for his “cure”. Wong can repair 60 per cent of the appliances brought here. The rest are too difficult to fix due to their intricate design, complicated assembly or easily breakable parts.

Sometimes, he has no choice but to give up on repairing an item although he knows it is repairable. This is often because the electronic components are too small and precise to work on without a microscope and specialised tools.

For example, there is a crucial chip on a television circuit board that can only be replaced by prising off the old chip and soldering on a new one. Wong says it is unlikely that ordinary people would possess the technical knowledge and skills and the soldering tools to carry out the repair.

What is more, Wong says it is getting more difficult to find components. Even when he can find them on the mainland e-commerce site Taobao, the purchase and transportation costs can add up to around HK$100. Wong thinks this is a deliberate strategy on the part of producers.

Another strategy is known as planned obsolescence. This is where producers design products with shortened lifespans in order to get repeat sales. Sometimes they might do so by using what they call “environmentally friendly components” that have a shorter lifespan.

Wong has observed that fridges and washing machines normally last around 10 years. Television sets last for a shorter period of three to five years. Mobile phones are the most short-lived, with a lifespan of two years.

Whereas producers used to stress the durability of their products, they now no longer make long-lasting appliances in order to protect future sales. As consumers are forced to buy new ones more frequently, the flow of goods is faster.

The relatively high cost of repairing items relative to buying new ones discourages Hong Kong people from mending equipment. “Small domestic appliances have no repair value,” says Wong. “[Even if] it is repairable, no one is willing to repair it,” Wong says.

Wong takes a broken electric fan as an example. The cost of repairing would be upwards of HK$200. Many people would rather buy a new one for HK$400.  He adds that it is expensive to fix things not because of the cost of materials but because of the cost of labour. After all, it is reasonable for professional technicians to charge HK$200 to HK$300 for an hour’s work.

However, some appliances are still considered to have repair value and there are still shops and small mobile stalls on the street that collect large electrical appliances like computers, televisions and washing machines.

After they are collected, many are taken to a recycling site at the Kowloon City Pier, where you can see electrical appliances piled up on cargo ships. The repairable items are sent to developing countries like Vietnam and Cambodia where the labour costs are significantly lower than in Hong Kong.