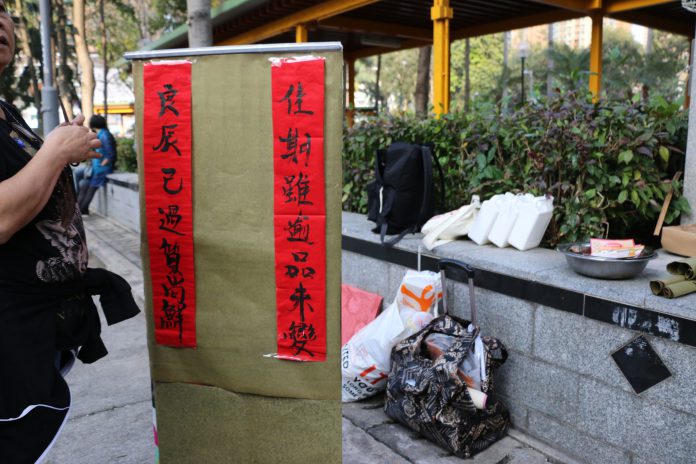 At a street stall, chocolates, crackers and a variety of snacks are placed on trays for passers-by to sample. It is not long before a group of children gather in front of the stall to try some M&M chocolates from two different containers. Afterwards, they are asked which chocolate they preferred. As they struggle to recall any difference in how they tasted, they have demonstrated the point of the experiment – that it is almost impossible to taste the difference between sweets that have passed their “best-before” date and those that have not.

The activity was organised by After Best Still Good, a group devoted to reducing the amount of food wasted due to expiry dates. One of the expired snacks they gave out during the activity were Frutips, a gummy confectionary that was found dumped in huge quantities on January 15 this year. An estimated 10,000 packets of the sweets marked “best-before January 2017” were discarded at a rubbish station in Yuen Long. As news of the haul spread, many people went to “save” the candies that were still good to eat before they were tossed into a landfill. Some found their way to the After Best Still Good street stall.

Unfortunately, food nearing its expiry date is dumped en masse more frequently than we might think. Within a month of the Frutips incident, batches of best-before potato crisps were found in a refuse collection point in Tuen Mun. Although warehouses and supply chains are likely to be the ones at fault in these incidents, environmental groups are also concerned about the day-to-day disposal of expired food from ordinary households and about how the public understands the concept of expiry in food items.

The definition of expiry under the government’s food label policies can seem confusing. Under the Food and Drugs (Composition and Labelling) Regulations, there are two kinds of expiry labels in Hong Kong. “Best-before” dates suggest that if the food is stored properly, it can reasonably be expected to retain its specific properties up to and including the specified date. On the contrary, “Use By” dates are used in the case of highly perishable foods such as meat and dairy. Consumption of these food items are not recommended after the use-by date as they are likely to constitute an immediate danger to human health. However, members of the public have little concept of the different meanings of the two food labels. They have a limited understanding of expiry and blindly trust the printed dates instead of their senses. The result is wasted food.

Chung Hau-yin, associate professor of the School of Life Sciences at the Chinese University of Hong Kong, says that from a microbiological perspective, people should be more careful when consuming food with “Use By” labels. Since these items are prone to bacterial growth, it is better to be safe than sorry and not consume them. Meanwhile, “best-before” dates only relate to quality. Food might not be at its optimum quality once past the date but it could still be edible.

Chung says people are just not used to eating food that is not at its best so they may mistakenly think all food is inedible once it passes the date on the label. “People will know when food has gone bad, there will be a smell and they can taste it,” Chung says. Although the labels are useful guidelines, Chung thinks people should trust their instincts too.

Seria Choi Siu-ling started eating expired food two years ago because she thinks it is wasteful to throw away edible food. “In the past, we did not have such a thing as expired, we trusted our senses – smell, sight to see if it [food] had gone off,” she says. “We grew up like that; we can’t change just because of a date.”

Choi gets some of her expired food from a Facebook page called Free Food Flow. The page serves as a platform for members to exchange expired food to reduce food waste. Cat Chan, 44, is an active member of the page. Chan has been eating expired food for more than 10 years, and feels strongly about people wasting food.

“I work in the catering industry, and I can’t bear the way they dump food,” she says. “For a restaurant that closes at 10 p.m., when someone orders rice at around 9 p.m., they cook a fresh bucket just to serve two or three customers. The rest is thrown away if it isn’t sold.”

Many people overlook the fact that some pre-packaged food, such as canned foods and biscuits, have a very long shelf life. But for the sake of food safety, expiry labels are believed to set a buffer period before the actual expiry date, while “best-before” dates guarantee quality rather than safety. Under existing regulations and practices, a lot of food is thrown away before it reaches consumers.

Wong Man, 19, a former cashier at a ParknShop supermarket, says food is marked down to 40 per cent of its original price when it approaches expiry. In an effort to reduce food waste, ParknShop has been donating surplus edible vegetables, fruit, bread, meat and packaged food to charities since 2012. They also participate in the non-edible food recycling trial programmes organised by the government and various organisations. However, under the Trade Description Ordinance, it is an offence for supermarkets and food retailers to sell and give away any expired food that is past either the “best before” or “use by” date so it is written off and thrown away, says Wong.