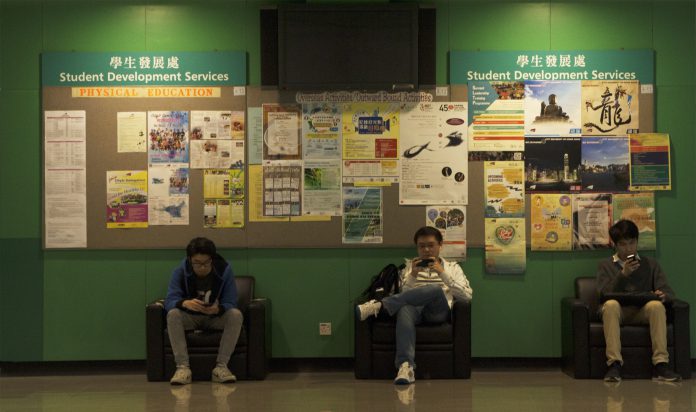 Listening to a long lecture, a student takes out her phone and starts chatting with friends. When she puts down her phone, she starts to draw pictures on her lecture notes. Kerry So Tsz-ching, a Year Two student studying in the Associate of Social Sciences (Behavioural Science) programme at HKU Space Community College, has attention deficit hyperactivity disorder (ADHD) and often finds it hard to remain focused for long periods of time.

She was diagnosed with the disorder – which is characterised by impulsivity, inattention and hyperactivity – when she was in Secondary Four and took medication for a few years.

Hong Kong has fewer students with SEN in tertiary education compared with other countries, but the number has increased in recent years. The Equal Opportunities Commission (EOC) says the total number of students with SEN studying in full-time undergraduate degree and sub-degree programmes grew from 532 in 2011 to 1,061 in 2015. Still, this is just 1.4 per cent of the tertiary student population.

Education Bureau figures show that of the 348 SEN students enrolled on UGC-funded programmes in the 2015/16 academic year, 14 per cent have autism, ADHD and other specific learning difficulties.

However, this refers only to those who have declared their disability, which is done on a voluntary basis. Students with SEN can submit information about their disabilities via the Joint University Programmes Admissions System (JUPAS) when they apply to UGC-funded programmes. This allows the institutions to identify them and provide timely and appropriate assistance.

However, Kerry So chose not to disclose her ADHD to HKU Space as she thinks her symptoms are mild. “ADHD had a greater impact on my childhood, but I’ve become more self-disciplined as I have grown up and can control myself now,” she says.

While she was given 20 per cent of added time when she took her secondary school public examinations, she did not apply for similar arrangements from HKU Space because she can now complete her exam papers within the standard prescribed time. She does, however, wish she could have more than one break in a three-hour lecture.

So says counsellors and social workers will follow up on students who have declared they have SEN. But for students like her, who have not disclosed their disability to the school, it is not easy to get information on how to ask for assistance or access the unit responsible for SEN issues.

Unlike So, Queenie Lau Pui-kiu, a Year Four student studying for a Diploma of Vocational Education (Business) in the Vocational Training Council (VTC) Youth College, informed the school that she has autistic spectrum disorder before her admission interview.

The VTC has a special admission procedure for students with SEN, who are offered a place if they meet the entrance requirements and are assessed to be capable of completing the studies during an interview. Because it has this separate admission route, the VTC has a higher intake of students with SEN than other post-secondary institutions. It is also the only tertiary institution to get HK$12 million annually from the government to provide SEN support services since 2013. Compare this with the HK$20 million in total that the UGC has provided as a one-off grant to its eight funded universities in 2015 to enhance SEN support.