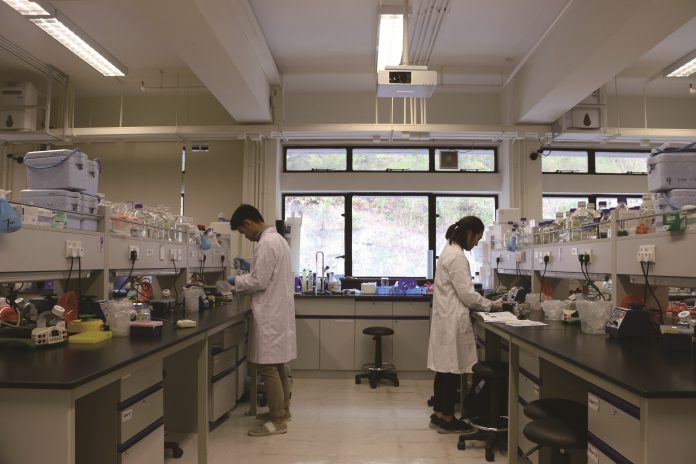 The education system is driving students away from STEM subjects

In the science laboratory at S.K.H. Kei Hau Secondary School, cardboard virtual reality glasses are scattered on the tables where little robots hit ping pong balls with their paddles. Student members of the Electronics Club explain the robots were made for a robotics competition. They also demonstrate the use of augmented reality technology used to help students understand the periodic table in an interactive way. When a user looks through the glasses at the symbols of elements in the table, information about them will appear.

Chan Kim-ho, a Form Five student, has been a member of the club since his first year at the school. Kim-ho says that through joining STEM activities, such as interschool science competitions, he has paid more attention to new technologies and the scientific principles underlying them.

The term STEM originated in America and refers to the academic disciplines of science, technology, engineering and mathematics. As applied to education, it relates to a curriculum that uses an inter-disciplinary approach to teaching these disciplines in a hands-on way through real-world applications. S.K.H. Kei Hau Secondary School began taking this approach in 2003, long before Chief Executive Leung Chun-ying first proposed STEM education in the 2015 policy address.

Aligning with the worldwide education trend, the government is promoting STEM in the hope of nurturing talent to cope with rapid economic, scientific and technological developments.

The Education Bureau distributed a one-off grant of HK$100,000 to each primary school in the 2015/16 school year to start new initiatives and enhance existing STEM projects. In this year’s Policy Address, STEM education was again on the agenda with an additional one-off subsidy of HK$200,000 for each secondary school.

These initiatives follow an earlier pilot scheme where the government gave a HK$7.5 million subsidy to eight selected secondary schools in 2014/15 to incorporate IT enrichment programmes. Cheung Sha Wan Catholic Secondary was one of them. Ng Chi-wai, the teacher who designs the class, says not many schools are ready to practice STEM education. Ng explains that initiating a new project takes a lot of resources and time. The school curriculum is already quite packed and students have heavy workloads as it is.

The Academy of Sciences of Hong Kong (ASHK) was founded in December 2015 to promote the development and advancement of science and technology in Hong Kong. Following the government’s efforts to promote STEM education, the institution published the report, Science, Technology and Mathematics Education in the Development of the Innovation and Technology Ecosystem in January this year.