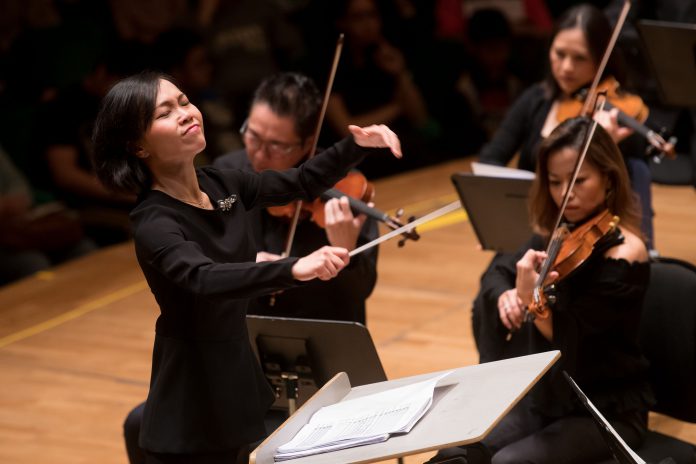 Popular perceptions of maestros tend to be of strong, stern, physically flamboyant and powerful characters. This makes 31 year-old Vivian Ip Win-wun something of a surprise. Female conductors at the top level are still scarce in Hong Kong. Only Virginia Yip Wing sie, conductor and music director of Hong Kong Sinfonietta, has notably and literally picked up the baton for women conductors to date.

The similarly named but unrelated Ip, a young conductor with an approachable yet assertive personality, started conducting at the age of 14. Last year, she was appointed as the first female assistant conductor of the Hong Kong Philharmonic Orchestra (HK Phil).

Ip loves conducting because ensemble music is her favourite kind of music and the conductor is in the privileged position of being able to see a choir or an orchestra as a whole. She says that being able to appreciate the full picture of the performance allows her to feel the music in a complete way.

Her determination to develop a career in music dates back to secondary school. “I hoped music could be a part of my life instead of a hobby only,” says Ip. “Turning music into a profession allows me to dedicate all my time and efforts into it.”

Despite their initial objections to their daughter embarking on what they thought was an unstable profession, Ip says her parents eventually gave their support when they saw how happy and contented she was when making music. She jokes that there was nothing they could do about it anyway, since she had made up her mind and insisted on taking this path.

Ip considers it impossible for musicians to starve in Hong Kong because they can always make a living by teaching, but she thinks that performance opportunities for professional musicians in the city are limited. Therefore, after studying for five years in Vienna, she stayed there for another two years after graduating, taking up choral conducting and instrumental projects. It was not until the job position of assistant conductor of the Hong Kong Philharmonic orchestra came up that she decided to come back.

As assistant conductor, she mainly acts as understudy. She studies the orchestra’s repertoire, reflects musicians’ feedback to the conductor, listens closely to the balance when there is a concerto or collaboration with a choir, and stands in when the conductor cannot make a performance.

The orchestra has a new programme every week and usually rehearses Wednesday through to Friday, then performs at the weekend. A lot of individual study is needed before the rehearsals.

At the same time, Ip is responsible for some of the orchestra’s outreach and education programmes. This May, Hong Kong Phil launched an educational outreach programme for students, with Ip as the conductor. The programme consists of a series of 10 consecutive concerts and while orchestra members might find it repetitive, Ip cherishes the interactions between the students and the orchestra.

As a young conductor, one of the hardest things she has to manage is dealing with relatively senior players in the orchestra whose performances may not work out the way she wants them to.

“I would doubt myself at first,” says Ip, “but as I proceed, I become more certain and I just give my best.”

It is especially challenging as Ip may be responsible for lighter and less challenging programmes, which some players may not take as seriously. She has to find a balance between achieving the performance she wants without making the musicians feel bored or annoyed.

In a field dominated by men, Ip says she sometimes hears some female conductors talking about their difficulties in getting opportunities, but it is virtually impossible to prove whether they lost out on jobs because of their gender.

In 2013, the principal conductor of the National Youth Orchestra and the Royal Liverpool Philharmonic Vasily Petrenko told an interviewer for a Norwegian newspaper that “Orchestras react better when they have a man in front of them… a cute girl on a podium means that musicians think about other things.” He later said the remarks were taken out of context and that he was describing the actual situation in his home country of Russia rather than his own views. Nevertheless, the comments created a controversy that highlighted existing prejudices about women conductors.

It is also a viewpoint that Ip completely disagrees with. She thinks that when countries like Germany and Britain have female leaders, it is outdated to judge a leader by gender. As female conductors can be as talented as male conductors, it would be sexual discrimination if the female conductors’ charisma and musicality is not appreciated just because they are women. Ip says the remarks attributed to Petrenko could amount to sexual harassment as musicians are supposed to be professional and it is their job to stay focused and respect the conductor.

For her part, she is glad to see more female orchestral conductors coming onto the scene and shattering this stereotype. “I hope the goal is not to judge a conductor by gender, but simply by musicality and personality,” she says, adding that women conductors can be as powerful as men in terms of gesture.

Certainly, it would be a mistake to dismiss Ip’s powers as a conductor because of her easy-going personality and small stature.  Kathy Fok Ka-man, music director and principal conductor of the Hong Kong Children’s Choir (HKCC), was Ip’s mentor and teacher when she was a schoolgirl choir member. As someone who has known Ip since she was nine, Fok says her first impression of her student was her diligence and discipline. Fok vividly remembers Ip studying scores and reading books backstage while other children were playing and chattering before an opera performance.

For her part, Ip is grateful for all the things Fok taught her: fairness and seriousness about work, humbleness and respect towards colleagues, and care towards students. She sees Fok as a role model and mentor. “It is not her success that encourages me; it’s her quality as a person and as a musician,” Ip says.

While Ip sees Fok as an inspiration, she may not  be aware that she herself is also an inspiration to others.  Vivian Suen Ming-wai was Ip’s fellow chorister at HKCC and now serves as artistic coordinator and a conductor of the choir. Suen says Ip gives her a lot of advice and partly inspired her to also pursue a career in conducting. It is from Ip that Suen realised a conductor does not always have to be physically big or masculine to make other musicians trust and obey them.

“Although she is relatively tiny compared to other conductors physically, the knowledge and courage inside her is not tiny,” Suen says.

Despite their determination, Ip and Suen will find that Hong Kong still lags behind in terms of cultural development, resulting in a rather small-scale core audience for classical music concerts.

Looking ahead, the biggest challenge Ip foresees is the keen competition in the conducting field. Being a conductor requires both hard work and luck, and there are not enough jobs to go around. Ip says it is hard to develop a career in music in a place where the government focuses on economic growth more than cultural development. She has still to figure out her next move after her two-year appointment with Hong Kong Phil ends.

She says she will keep looking for further choral and orchestral conducting opportunities but does not plan to settle down in Hong Kong yet. “You can’t do too much planning in this field,” Ip says.

The conducting life is a nomadic one – conductors go to where the work is. For Ip that means she could be working in Europe, America or Hong Kong. She is open to opportunities and wants to develop as a professional conductor. On the other hand, she feels her roots are in Hong Kong and she would like to contribute to future generations. Teaching is one option for her, but she thinks she needs to continue performing and gaining experience in order to be a better teacher.

This drive to learn is also what motivates Ip to take part in competitions around the world. She says she does not enter these events to win prizes or fame, but to appreciate the music and learn from other competitors. Learning and teaching is a two-way street because, for Ip, lifting others is a way she can improve herself, and she never tires of learning.

“After all, music is something I can’t live without,” says Ip.