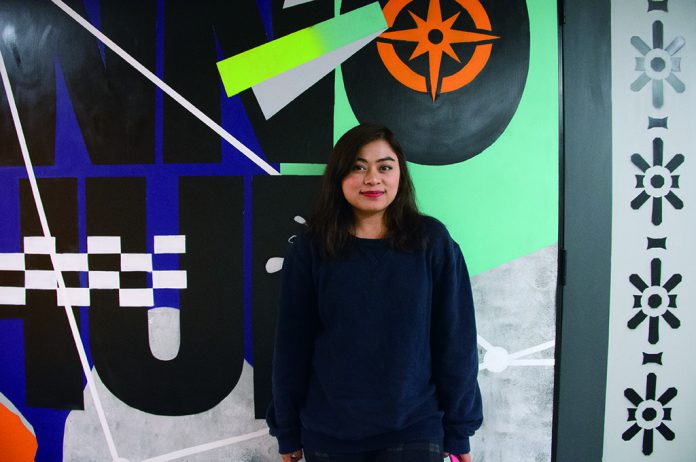 When the 18-year-old applied for a part-time job two years ago, she could not have imagined she would wind up speaking in front of an audience that included reporters, officials from Asian governments and representatives of the International Labour Organisation. But that was what Namrata Shrestha – known as Nami – did at the 10th Association of Southeast Asian Nations (ASEAN) Forum on Migrant Labour in the Philippines capital Manila last October.

The theme of the forum was “Towards Achieving Decent Work for Domestic Workers in ASEAN”, and it was organised to support the implementation of the ASEAN Declaration on the Protection and Promotion of the Rights of Migrant Workers. Representing the Hong Kong Federation of Asian Domestic Workers Union (FADWU), Nami talked about the working conditions of domestic workers in the city and received a standing ovation from the participants. “I felt like ‘oh my god’… I am contributing to a change,” she says.

Now 20, Nami was born in Hong Kong to Nepali parents and is a third year student of aviation management and logistics at the Hong Kong Polytechnic University. She began working part-time as organising secretary at FADWU when she was just 18. A college friend had told her about the position. Although she had no previous work experience, she landed the job because of her determination to change domestic workers’ lives. “I just wanted to help the people…I just wanted to help someone out,” she says.

As the organising secretary, Nami’s job is to coordinate the unions that make up FADWU. As she is of Nepalese ethnicity and speaks the language, she mainly takes care of the Nepalese union.

Nami’s first job in FADWU was to coordinate a project for the Union of Nepalese Domestic Workers in Hong Kong (UNDW). The project consisted of a number of different events such as a survey and dance and English classes for Nepalese domestic workers. The survey found that nearly 45 per cent of Nepalese helpers were paid less than the legal minimum wage for foreign domestic workers and that more than 53 per cent did not get the mandatory full rest day a week.

“Nepalese domestic workers are like little to none, they are very, very minority,” Nami says.

Conducting the survey was a means to let workers know about the rights they are entitled to. Nami took part in organising a press conference to present the findings of the survey and publicise the plight of Nepalese workers. She felt a sense of accomplishment as UNDW’s membership increased from 65 to 110 after the poll and other activities related to the project.

Nami is also involved with an annual FADWU event called FADWU Kitchen, which is a gathering where all domestic workers bring their own food, share with one another, play games and have fun. Although they may be of different nationalities and speak different languages, Nami says the domestic workers have much in common and share “the same passion”.

Looking at this confident and lively young woman today, who is so active in helping some of Hong Kong’s most disadvantaged workers, it is hard to imagine that Nami was once shy and quiet. But that is how she describes herself as being in her school days.

She was born in Hong Kong but financial hardship led her mother to send her back to live with her grandmother in the Gorkha District of Nepal when she was just six months old. She later moved to Kathmandu, Nepal’s capital city, where she entered a boarding school.

Nami describes herself as being very active and tomboyish at that time. She took part in different activities like dancing and drama, and sports like football, swimming and badminton. She enjoyed a carefree childhood in Nepal.

That all changed after her mother gave birth to her younger brother and Nami was brought back to Hong Kong so the family could live together. Nami entered primary three at school where she had to contend with a different culture and different languages.

Since she had spent most of her time in Nepal playing, she could speak in Nepali, but not well, let alone communicate in English and Cantonese. She attended a local ethnic minority school, Sir Ellis Kadoorie Primary School, where she became very quiet. By the time she progressed to Sir Ellis Kadoorie Secondary School (West Kowloon), her English had improved a lot and she had adapted to life in Hong Kong. She made many Nepalese and Filipino friends as well. However, she says she was still a lot shyer than she had been in her Nepal days.

Nami says it was not until she took up her job at FADWU that she regained her confidence. She recalls that when she first started working on the UNDW survey for her first project, she had found it awkward to strike up conversations with strangers. But in order to conduct the poll, she had to go out and ask domestic workers questions about their work. She learnt to communicate with others and became more comfortable doing so over time.

She also learnt in other ways too. The 20-year-old has to bear the responsibility of speaking for domestic workers. She has held press conferences, given television and radio interviews, and spoken on behalf of FADWU and domestic workers at the Legislative Council.

“I would say I really, really grew up with FADWU,” she says.

Nami says her multi-tasking job as organising secretary of FADWU makes her something of a “chameleon”. She can be a choreographer in a dance class one moment, an English teacher, event photographer, a journalist interviewing and writing about domestic workers for FADWU publications, an activities leader, and a spokesperson in the media at other times.

What all her FADWU roles have impressed upon her is the serious problems domestic workers face in Hong Kong. The problems are often complex and different nationalities face different difficulties.

For Filipino and Indonesian domestic workers, Nami says the problem is not so much that they do not know about their rights. The widespread problem in these communities is the exploitative behaviour of employment agencies, such as the overcharging of agency fees. For smaller minority groups like the Nepalese, Indian and Bangladeshi domestic workers, the problem is that many do not know English and Chinese and they tend to be unaware of their rights. As a result, these workers are frequently exploited and mistreated by their employers in terms of salary and working hours.

Nami says that one case that left a very deep mark on her involved an Indian domestic worker whose employer, over the course of six months, refused to allow her out of a house on Lamma without permission. The woman was around 60 years old and could only speak Punjabi. Her employer had physically abused her and withheld her wages. Initially, Nami only barely managed to communicate with her in Hindi. Later, FADWU helped her file a case with the Labour Department and get her unpaid salary back.

The woman’s case made Nami very sad. “Domestic work is like any other, it’s a job…they are at home doing their job so that you can go out and do your own job,” she says. “If you don’t like them…you can terminate them. Don’t abuse their rights at least.”

She believes that there are worse cases in which victims do not know where to find help. She says most victims do not even know there is a union. “They don’t know how to approach us, so we try to approach them,” she says, explaining why the union organises outreach activities.

Nami is currently working on a project funded by HER Fund, a foundation that gives financial support to help protect the human rights of grassroots women. The project includes carrying out a survey on domestic workers’ working conditions, and putting on activities like Cantonese, English and dance classes and cultural festivals that promote labour laws. She wants domestic workers to know about their rights.

She has gained a lot from her two years in FADWU. “It’s more than a job, they give me so much…I am very, very happy to work here,” says Nami.

And she is not just a multi-tasker within the organisation. Nami also finds herself involved in many activities outside FADWU as well.

Apart from being a full-time student and part-time unionist, she also works as a part-time teacher in a tutorial centre where she teaches local children English comprehension, writing and phonics.

As for her studies, Nami says she has been interested in aviation since her secondary school days. She took the Applied Learning Course in Aviation in senior secondary and cultivated her interest in the subject. She thinks aviation is a growing industry with a lot of prospects. She believes the aviation system in Nepal is backward and she hopes to learn more about aviation and help her native land in the future.

Some of her friends find it interesting how she can be a social activist, a teacher and an aviation student at the same time. Although her roles do not really overlap, Nami does not think it is a big deal. Apart from her aspirations to help domestic workers, her teaching and aviation studies, she also wants to open orphanages in Nepal in the future and, as if that wasn’t enough, the plan eventually is also to help street dogs.

“You don’t really [need to] limit yourself to one thing”, she says. “I’m happy doing what I am doing.”