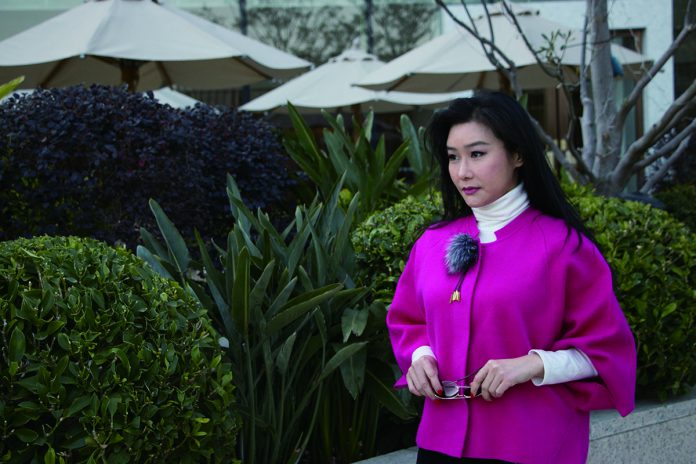 She has played a Spider Spirit, a sexy leather-clad ghost hunter and much more besides, but the story of 44-year-old Angie Cheong Wai-yee’s life could give any of the dramas she has acted in a run for their money. It is a story of departures and heartbreaks, of homecomings and love.

And it begins in Ipoh, Malaysia where Cheong was born and grew up with four siblings. She says her parents were open-minded and let their children grow up freely and independently. Given the freedom to dream, the young Angie dreamed of becoming an actress from a very young age.

She fondly recalls how she loved to act out different parts in front of a mirror when she came home from school. “I think every one of us is born to be a certain role,” says Cheong. “I wanted to act, I wanted to be an actress.”

Like many overseas Chinese, she grew up watching Television Broadcasts Limited (TVB) dramas and aspired to join the company when she grew up. This was no easy task for a girl in Ipoh but Cheong soon figured out a path to make her dream a reality. “There was only one path [to become an actress in Hong Kong], that was to compete in a beauty pageant,” she says.

Having set her goal, Cheong set about preparing to run for various beauty pageants. She made her first attempt when she was 13 years old, participating in a teen beauty pageant called The Young Princess Beauty Contest (妙齡公主). Although she did not win, she gleaned experience which helped her in later contests.

Cheong realised the importance of preparation and worked hard on presenting herself in the best possible light to win over judges. Her hard work paid off when she won the title of Miss Chinese Malaysia in 1992. This meant she could represent Malaysia to compete in the Miss Chinese International in 1993, which was held by TVB in Hong Kong.

Cheong was not so concerned about winning the contest, but about having the chance to stand on TVB’s stage. “I didn’t care whether I won or not, but that among the candidates, I must make myself stand out in the spotlight so that I could stay in Hong Kong [TVB],” she says.

Cheong did not win the competition but decided to stay on in Hong Kong in case TVB made her an offer. “I told them I’d stay at this hotel after the competition, you can look for me there, I will stay for three days,” she recalls.

The plan paid off, on the second day, TVB rang her and asked if she would like to stay and become an actress. “I was very happy, I felt like my dream had come true,” she says.

At first, adapting to her new life in Hong Kong was a challenge. She had no friends or family, she had never experienced winter in Malaysia and the Cantonese spoken in Hong Kong was different from that spoken in Malaysia. She remembers answering the phone calls put through to TVB’s Artists’ Department so she could practise her Cantonese and reading the newspapers out loud to a supervisor every day.

Over time, Cheong’s efforts bore fruit. She was given starring opportunities in dramas, including popular ones such as Mind Our Own Business (開心華之里) in 1993, Crime and Passion (新重案傳真) in 1994, and the long-running hit sitcom A Kindred Spirit (真情) in 1995.

Outside of TVB, Cheong also acted in films and in Asia Television Limited (ATV) dramas such as the cult classic My Date with a Vampire II (我和殭屍有個約會II). The girl from Ipoh became a household name.

During these years, Cheong says she learnt a great deal about her craft – her acting skills improved a lot. She also learnt about the importance of team work as making a drama requires collaboration among many production members.

Then, in 2003, Cheong’s world came crashing down. Cheong was beaten up by her fiancé, an experience that left not just physical but also emotional wounds and damaged her self-esteem.

“I was so ashamed at that time,” she says. “Whenever I saw people whisper in one another’s ear, or get a glimpse of me, I felt like they were talking about what happened to me.”

Looking back, Cheong says she lacked the judgment to make the correct decisions for herself. After the abuse, she was under immense emotional strain and needed to find a space where she could find some relief. Later that year, she decided to leave Hong Kong for Beijing, to make a fresh start in a Chinese city where nobody would recognise her.

Cheong took some time off to collect her thoughts and to look back at her life. She came gradually came to the realisation that, “it seems that besides acting, I know nothing…Should I change my way of life?”

In 2004, she decided to venture into business – importing Malaysian tropical fruit jams to Beijing stores. First, she needed to find a local distributor to help her get the goods into local stores. With no local connections, she did not know where to start. “I went to the local supermarket that sold imported food … there were stickers with the distributors [details] on every product,” she recalls. Cheong copied these details and contacted the distributors one by one. Finally, she found one who would work with her.

While Cheong was managing her fruit jam business in Beijing, the idea of doing volunteer work hit her, out of the blue. In the summer of 2006, she began to help out at the Ping An Medical Foster Home (平安之家) in Beijing, which helps orphans with serious illnesses and birth defects get medical help and care.

“I guess when a woman reaches a certain age, she would feel a kind of maternal instinct inside,” says Cheung as she tries to explain why she chose to volunteer at the home.

The decision was to bring an even bigger change to Cheong’s life. At the home, she met a two-year-old, Hanson, who was born with a heart defect. “I thought he was very cute,” says Cheong. “The second time we met, I brought him to have ice-cream at the hotel lobby. He called me ‘mother’.”

At that moment, Cheong decided she would try to adopt Hanson but the process was long and complicated. It had already been arranged for Hanson to be adopted by an American couple but Cheong knew the process would take some time (usually eight months to a year).

She asked the principal of the home if she could take care of Hanson while the adoption was pending. The principal was a Hongkonger who had seen Cheong’s work as an actress. She rejected the request because she was not convinced that Cheong would have the time or commitment to take care of the boy.

Cheong refused to give up. She showed her determination through her actions, visiting the home every day to cook meals for Hanson and take care of him. Her dedication finally moved the principal and she was allowed to bring Hanson home.

A few months after that, the American couple gave up on adopting Hanson and Cheong applied to adopt him. It took eight years of complex proceedings before Cheong was finally declared Hanson’s legal mother in 2014.

Being a mother to Hanson has been life-changing. She has to take care of Hanson’s daily living and medical expenses. As her fruit jam business was not doing so well, she moved from Beijing to Panyu, Guangdong in 2008 to expand the scope of her business. She obtained agent’s rights to sell certain daily commodities and wholesale bird’s nest, and opened a gift shop selling ginseng, dried seafood and wine in Guangxi. She also operated franchises of the chain dessert shop Hui Lau Shan in Beijing, Tianjin, Chongqing and Chengdu.

She thinks her experience as an actress has helped her in business as she is good at communicating with others. But, at the same time, she had to cast away her identity as an actress in order to start learning about business from zero. Having settled into her life as a businesswoman and mother, Cheong came “home” to Hong Kong and to TVB in 2013 after an absence of 10 years, to star in the hit drama, Never Dance Alone (女人俱樂部), a series that also featured other former stars who had all but retired from the entertainment industry, such as Gloria Yip.

To Cheong, her relationship with Hanson seems like destiny. “I believe Hanson is the grace from God,” she says. After adopting Hanson, her personality changed. “I have turned into a more mature person who embraces family life.” Currently, Hanson lives with Cheong’s family in Malaysia, while she travels back and forth between Hong Kong, Malaysia and the Mainland.

Her son’s medical condition has made Cheong realise how precious life is. “That is why I cherish the moment…it is important to love others with our heart”, she says. “The value of life is to share your love to others selflessly.”

Looking back over her life, Cheong describes herself as a “phoenix rising from the ashes”. She has played different roles on the screen and in life and she is thankful for them all.  “I am in love with every role,” she says.