Back in the 1960s and 1970s, air travel was seen as glamourous and romantic. For most travellers, this is no longer true. There are now more people taking more flights to more destinations, packed into ever tighter spaces. As aeroplanes move more goods and people around the world, airports and cities around the world vie for aviation dominance.

Here in Hong Kong, the government has, despite some objections in society, launched the Third Runway System project to accommodate more travellers and cargo. It says the new runway and attendant facilities are necessary to keep Hong Kong competitive as a regional and international aviation hub.

With the HK$141.5 billion project expected to be completed by 2024, it seems an appropriate time to take a look at various aspects of the aviation business. In this issue of Periscope, we look at aviation education in Hong Kong, working conditions of cabin crew and ground staff, and how well the Hong Kong International Airport (HKIA) is holding up in the face of increasing competition.

We start by looking at the training of aviation personnel. Many are attracted to a career in the aviation industry and may even dream of becoming a pilot. However, there has been a shortage or absence of related, affordable courses and programmes in Hong Kong for many years. Hong Kong’s geography also makes flight training difficult, hindering young people from realising their aviation dreams.

The shortcomings in aviation education and training have exacerbated the labour shortage in the sector, a problem that becomes more acute with the demand for more manpower after the third runway is built. The staffing shortage has already affected the services of the HKIA. We talk to aviation enthusiasts, local education institutes, unions and analysts about the difficulties of entering the field.

For those who are already working in the industry, staff shortages and company cutbacks mean heavier workloads. Employees in the aviation industry, particularly flight attendants and ground handling workers, complain about long hours and poor management. The emotional well-being of increasingly exhausted cabin crew is of particular concern as it can affect flight safety. We listen to union representatives talk about the challenges workers face, especially in the face of fierce competition after the emergence of low-cost carriers.

Our final story in the section focuses on the reasons behind the HKIA’s decline in rankings in recent years. Having been crowned “Airport of the Year” eight times up till 2011, the HKIA has been surpassed by other airports in Asia and kicked out of the top three since then. We look at why Hong Kong has slipped in the rankings, and ask whether this really matters.

Elsewhere in the April issue, we hear from international students who feel excluded in Hong Kong’s universities, look at security on public housing estates, profile a 20-year-old student who is a spokesperson for Nepalese domestic workers, learn about how dolls can help people with dementia, and much more.

As we celebrate Varsity’s 25th anniversary, we hope to receive your continued support on the road ahead. Happy reading! 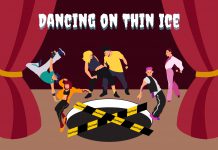