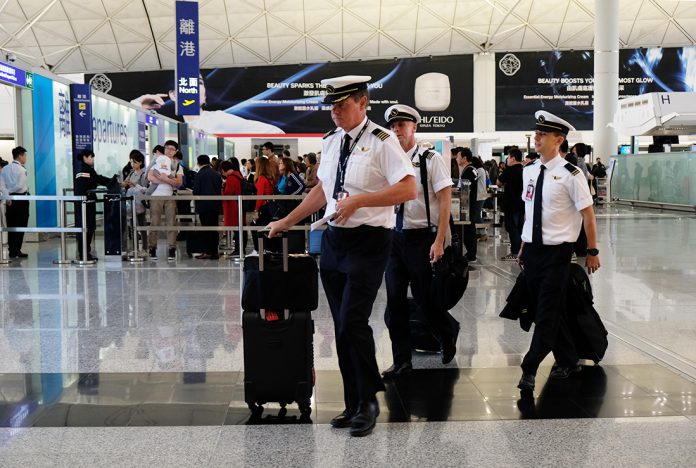 n the July 31 2016, dozens of activists marched through the terminal building in Hong Kong’s International Airport (HKIA) to oppose a HK$141.5 billion project to build a third runway and associ­ated facilities. They said the project would be a white elephant and cause untold environmental damage, in­cluding threatening the survival of the Chinese white dolphin. But dissenting voices in the community failed to stop the project.

The three-runway system (3RS) is scheduled for completion in 2024 and aircraft movements are set to in­crease from the 68 flights per hour on the current two-runway system to 102 flights per hour. Together with the expansion of Terminal 2 and other facilities, authorities predict an extra 50,000 extra staff will be required to perform various jobs in the expanded airport. However, even at its current scale, industry insiders say the airport is short-staffed and the cultivation of aviation talent has been under-devel­oped for years.

Law Cheung-kwok, the director of policy at the Aviation Policy and Research Centre at the Chinese Univer­sity of Hong Kong, says that aviation education in Hong Kong lags behind the rapid development of the sector, and it is too late to start filling the void. This despite the fact that the Basic Law highlights the status of avia­tion in Hong Kong.

“There are only two ‘centres’ in the Basic Law that Hong Kong is posi­tioned as, one is as a financial centre, the other is aviation. They are impor­tant industries for Hong Kong’s economic pro­duction,” says Law. “Indeed, the financial industry is highly valued, but the attention paid to [Hong Kong’s role as an] avia­tion hub is relatively low.”

According to Article 128 of the Ba­sic Law, the Hong Kong government should maintain “the status of Hong Kong as a centre of international and regional aviation” but Law points out the absence of an aviation school in any of the University Grants Com­mittee-funded universities in Hong Kong.

“If this field is that important, we should have had it [general aviation education] long ago,” he says.

Some tertiary institutes have launched aviation courses in recent years. The Hong Kong Polytechnic University established the Interdisci­plinary Division of Aeronautical and Aviation Engineering in 2016. It also offers degree programmes in avia­tion management. The Hong Kong University of Science and Technology started offering a Bachelor’s degree in Aerospace Engineering in 2015 and Master’s degrees in Aeronautical Engineering and International Air Transport Operations Management respectively in 2016.

Other education institutes of­fer self-financed higher diplomas or certificates courses. One example is the HKU School of Professional and Continuing Education (HKUSPACE)which has offered a range of avia­tion programmes since 2006. These include diploma courses in aviation management, ground services, air­port operation and a certificate for the Australian Private Pilot License (PPL). There are over 1,000 total an­nual enrolments.

Lam Siu-ming, the senior pro­gramme director of the College of Life Sciences and Technology at HKUS­PACE sees the establishment of the HKIAA as a positive development.

“We are comparatively slow [in aviation education], but at least we have started, I hope we can catch up,” he says.

Lam thinks aviation education was slow to get off the ground in Hong Kong in part because of its geographi­cal location. The available air space limits the flying experience young people can have, and this is an intrac­table problem, particularly when it comes to the training of local pilots.

Lam says he has met many young people who dream of becoming pi­lots. Over the past decade, 98 gradu­ates from HKUSPACE aviation pro­grammes have become airline pilots. But the college can only guide stu­dents through the syllabus of the private pilot’s licence programme. In order to obtain a PPL, which is compulsory for a qualified pilot, stu­dents must undergo further training overseas at their own expense. With two more advanced qualifications re­quired before one can become a com­mercial pilot, it costs a total of around HK$1 million to train to be a pilot.

While few can afford the train­ing, Cadet Pilot Programmes (CPP) launched by local airlines do subsidise those with talent to realise their avia­tion dreams. Currently, Cathay Pacific, Cathay Dragon and Hong Kong Airlines organise such programmes. Those who make it through the tough rounds of theory and practical tests, are sponsored to undergo pilot train­ing in Australia and New Zealand.

Hong Kong Airlines launched their first CPP in 2017. Of the more than 4,000 applicants, only 10 were selected. Lam thinks the stringent se­lection methods and requirements are necessary.

“As a passenger, you’ll be fright­ened if the pilot is not up to standard. The industry would not ease the re­quirements.”

Angela Yuen Yan-chi, 29, was one of the lucky few to join the first-batch of Hong Kong Airlines cadet pilots. She says only 7.5 per cent of the air­line’s 560 pilots are local. The per­centage will increase when the cadets complete their flight training but it will take years before the percentage rises significantly.

There is a global shortage of ex­perienced pilots but Yuen says the problem is particularly acute in Hong Kong because the territory is simply too small. “The airspace is not enough to share with neighbouring cities like Macau and Shenzhen,” she says, add­ing that Shek Kong Airfield is the only place to carry out flight practice.

“The only runway available in Shek Kong Airfield makes the cost of flying expensive.”

Krizto Chan Ho-ying, a 27-year-old aviation enthusiast agrees that avi­ation education in Hong Kong is not widely affordable. Chan has applied for the cadet pilot programmes for Cathay Pacific, Cathay Dragon and Hong Kong Airlines but so far with­out success.

“It’s a bit of a luxury here, even for those of us who are so into it, we have to save money for years before we can have our first flight,” she says.

Over the years, Chan has invested a lot to prepare herself for the CPP as­sessments. During her university years, she at­tended courses at the Hong Kong Youth Aviation Acade­my, a non-profit or­ganisation run by practising profes­sionals in the aviation industry, which aims to help aspiring pilots fulfill their goals. She underwent flight training in New Zealand too and holds a private pilot licence. None of this guarantees a place in the local cadet pilot pro­grammes.

The shortage of aviation person­nel is not limited to pilots. More avia­tion courses have become available recently but the historical inadequacy of aviation education provision has exacerbated the manpower shortage problem in the industry as a whole.

Cheung Shu-wang, chairman of the Staffs and Workers Union of Hong Kong Civil Airlines, estimates there is currently a labour shortfall of 5,000 airport workers. While safety is not affected yet, services are.

The most noticeable and imme­diate impact is longer waiting times for luggage but Cheung says there is insufficient staff in many areas, in­cluding parking aprons, check-in counters, bag­gage reclaim, technicians, pi­lots and man­agers. Cheung says these short­ages will affect airport operations and service quality. For its part, the AAHK does not respond to the criti­cism directly. But they say the use of technologies, such as the “baggage tagging robot” and “trolley counting system” can help improve operational efficiency.

As to whether Cheung thinks the setting up of the HKIAA can help ease the problem, he is not so sure.

“I think its efficiency and planning [in cultivating personnel] cannot really catch up with the growing demand for airport ground staff,” he says.

While the new institute offers courses on a range of high-end skills, Cheung thinks the airport is in ur­gent need of semi-skilled workers at the parking apron. He says the union will propose feasible policies to the AAHK.

Jeremy Tam Man-ho, who served as a commercial pilot before becom­ing a Civic Party lawmaker, says the government has been, characteristi­cally, slow to act.

“Every time, it’s not until there re­ally aren’t enough people that the gov­ernment thinks of methods to magic up some people. So that’s why you’ll see the establishment of HKIAA, it’s really to complement the third run­way.”

Tam thinks the government is on the right track to develop aviation. It now has policies in place and is following them, but he still thinks they have not done enough.

He adds: “I think the launch of HKIAA is appropriate, but there is not enough promotion, also the courses are not broad enough and some of them are very expensive.”

For those already employed at the airport, some financial support maybe available. The HKIAA says applicants for 20 of the professional courses can apply for a refund of 80 per cent of the fees, up to a maximum of HK$18,000 on completing the courses under the gov­ernment’s Professional Training and Examination Refund Scheme. And the fees if some courses are waived for airport staff “if they enroll through their respective organisations”, says the HKIAA.

But in order to attract new recruits, Tam suggests airlines, the HKIAA and aircraft engineering companies should offer more internships to encourage students to assess their aspirations and suitability for various posts in the sector. While companies may see offering internships as a kind of so­cial responsibility on their part, Tam points out they also benefit from nur­turing new blood. Therefore, he wants to see more cooperation between the industry and education institutes, so that companies can observe and hire suitable candidates upon their gradu­ation.

Former labour sector lawmaker Ip Wai-ming, who is now the deputy sec­retary of the Staffs and Workers Un­ion of Hong Kong Civil Airlines, says the high turnover rate is another factor of the manpower shortage in the industry. He thinks the staff shortage problem should be solved through the unions, government and re­lated corporations working together.

Ip believes the government should invest in order to get rewards, espe­cially if it regards aviation as an im­portant economic pillar of Hong Kong.

“They have to make people be will­ing to enter the industry, giving them the feeling that this is an industry with prospects and development, which can lead them to make a living.”