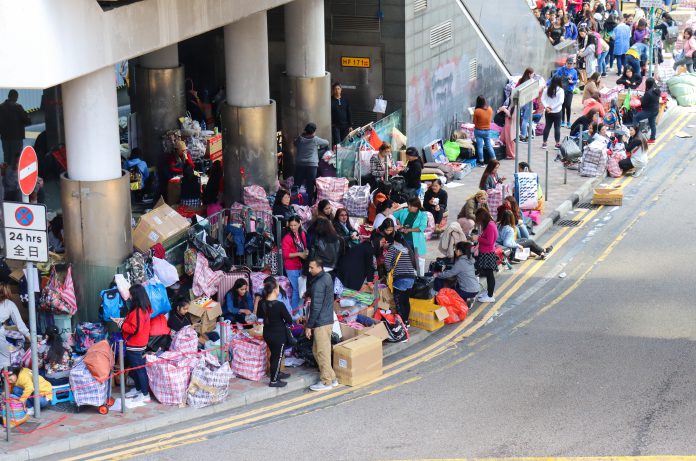 Despite lasting social unrest and the Covid-19 outbreak, domestic helpers are staying in Hong Kong to support their families.

Hama, an Indonesian domestic helper recalls being pulled and interrogated by a masked stranger after getting off a bus. “He pulled me over and asked me where I was from, where I lived. I didn’t answer him…I was frightened and confused,” Hama, who declines to reveal her full name, says.

She had this horrible experience when an anti-extradition bill protest was happening nearby.

Since June 2019, demonstrations have escalated into a much wider and prolonged anti-government movement in Hong Kong. The protests first started to go against the extradition bill, and protestors then stated their five demands including setting up an independent commission to investigate police brutality and dual universal suffrage.

Hama, who works in Pok Fu Lam, is concerned about the continued social unrest in Hong Kong. “I am worried that I won’t be able to return home when clashes happen,” she says. She used to feel safe to go “yum cha” on Sundays with her employers but she stays at her employer’s home more often now.

Some of her friends working in Aberdeen are so scared that they have stopped going to the Victoria Park on their days off. “They have friends who got injured accidentally when protests broke out,” Hama says.

Similar stories can be heard from other domestic helpers. A Filipino domestic helper who reveals her name as Liza, says, “I know someone had to sleep in a church because there was no transport back to their employers’ homes.”

Tear gas was fired during rallies in Central, where many migrant workers gathered to enjoy their days off. As the “Be-Water” strategy adopted by protestors encourages spontaneous protests in different districts in Hong Kong, domestic helpers are often affected by protests.

Tebia-Bonifacio, Chairperson of Gabriela Hong Kong, an alliance of women’s organisations supporting migrant Filipino workers, explains migrant workers usually go to Central to make some money and meet their friends on Sundays. As the protests usually happen in the afternoon, Tebia-Bonifacio says helpers still go out in the morning but leave earlier. “They make sure by noon, they move out of Central.”

The outbreak of the novel coronavirus has further restricted domestic helpers from having holidays as usual. “Because of current Covid-19, many domestic workers are not allowed to have holidays by their employers, especially (since the release of the) Hong Kong Labour Department statement encouraging employers not to allow their helpers to go out,” says Tebia-Bonifacio.

The statement released by the Labour Department on January 30 requests domestic helpers to stay at home on their day off. “The government appeals to FDHs (foreign domestic helpers) to stay home for rest on their rest day as far as possible, and to stay away from crowds on public transport or at public places. At the same time, employers must not require FDHs to work on their rest day,” the statement reads.

Tebia-Bonifcaio estimated that around 20% of the members from Gabriela Hong Kong are forbidden from taking their days off on February 6, 2020. “Some domestic helpers are asked to do some work, but some of them can rest in their rooms,” she says.

Apart from personal security and health concerns, some domestic helpers have become unemployed because their employers decide to leave Hong Kong due to the social unrest.

Liza knows around 10 people who encountered this. She estimates that around four of them were unable to find a new job before their visa expired and were therefore forced to return to the Philippines.

“Cases of domestic workers being severely affected by the protests would be domestic helpers who have lost their jobs because their employers have lost their jobs or have decided to go back to their home countries during the protests,” says Rey Asis, program coordinator of the Asia Pacific Mission for Migrants (APMM), an NGO which supports migrant workers’ rights in Hong Kong.

Mark Silva, community manager of the group, says, “There are a lot of expats moving out of Hong Kong because of the unstable situation. So when these expats return to the UK, or go back to Singapore, or any countries where they come from, they leave their helpers with no job. This is a situation that we call ‘terminated due to relocation’,” he adds.

“From our statistics, we have a lot of helpers available and needing jobs but we do not have enough employers to hire them,” Silva says. “For these past months, if you ask me what’s the effect of the current situation in Hong Kong, the effect is that we have a lot of helpers losing jobs and needing jobs but we don’t have employers to hire them. The number of helpers (looking for work) is increasing,” she says.

In August 2019, the Department of Labour and Employment under the Republic of the Philippines considered imposing a ban on worker deployment to Hong Kong due to the social unrest. Yet, most Filipinos did not consider leaving Hong Kong.

A survey conducted by HelperChoice, which interviewed 982 Filipino domestic helpers in Hong Kong last year found 97 per cent of the respondents would not consider relocating or going back to the Philippines.

On February 2, 2020 the Philippine Consulate General in Hong Kong announced a temporary ban on Filipinos from traveling to China, including Hong Kong and Macau. “Since the travel ban has been imposed by the Filipino government, workers, students and Hong Kong Filipino residents are now banned from going back to Hong Kong, so the possibility of losing their job is now the problem,” says Tebia-Bonifacio.

Even with the current social unrest, many domestic helpers are reluctant to quit their jobs and leave Hong Kong. Many domestic workers are the primary breadwinners in their families.

“If (migrant workers) lose their jobs, they also lose the capacity to support their families back home. This is why even in times of difficulties during their employment, they cannot go back home right away,” Tebia-Bonifacio says.

Tebia-Bonifacio had been working as a full-time teacher in the Philippines for three years before working here in Hong Kong as a domestic helper. “The only reason why I took the job of domestic worker is because there is no other opportunity. For a poor family like mine with no connections in the government, it is very hard to get a job that has a decent salary,” she explains.

Though employment opportunities are available in other countries, many foreign domestic workers still prefer working in Hong Kong. “There are a lot of workers in Singapore, Middle East and Malaysia – these helpers actually registered on the (HelperPlace) platform and they wanted to work in Hong Kong. For these workers from the Philippines, they prefer to work in Hong Kong for the reason that the salary is higher and the freedom to have a rest day once a week,” says Silva.

Welfare of Domestic helpers in Hong Kong and Singapore

*Statistics from HelperPlace reveal that wages for domestic workers start from SG$500 or HK$2,880 per month in Singapore.
**Under Hong Kong’s Employment Ordinance, employers are required to grant domestic helpers one day off per week. Employers are not allowed to request their helpers to work on rest days except in cases of unforeseen emergencies in Hong Kong.

In 2018, 386,075 foreign domestic helpers worked in Hong Kong, according to figures from the Census and Statistics Department. Most of them were from the Philippines and Indonesia.

Despite the unstable situation in Hong Kong, the number of Filipino domestic helpers increased from 210,897 in December 2018 to 219,915 in November 2019, according to the Philippine Consulate General in Hong Kong.