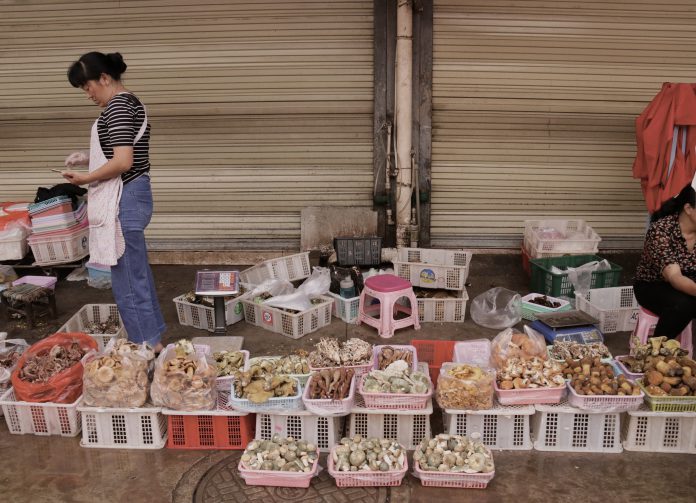 In Yunnan, people shop for daily necessities and fresh produce from the wild in street markets.

By Vivian Cao in Yunnan

Street market is a place where people in Yunnan trade agricultural commodities. History of street markets can be traced back in Shang and Yin dynasties in ancient China.

People go to street markets in nearby villages to sell their agricultural products and buy necessities that are not available in their own villages.

Mei, who declines to reveal her identity, bought chilis, corn, and wild fungi in a street market named Zhebei market which takes an hour drive from Kunming city.

She goes to the street market once or twice a month with her friends and families, and she believes it is a good way for them to relax.

“Agricultural products in this street market are really cheap. For example, the corn I bought here only costs RMB ¥2 (US $0.3) for a kilogram. But in Kunming, it costs at least RMB ¥10 (US $1.5) for a kilogram. These products are fresher than those in wet markets in the city,” the 47-year-old woman says.

She pays cash for corn and chilis, and uses QR code payment for the wild fungi in the street market. “I prefer using QR code payment. But many old people do not have smartphones or are not familiar with using it in street markets. So I prepare cash when I come,” Mei says.

“Many old people do not have smartphones or are not familiar with using it in street markets… So I prepare cash when I come.”

Yunnan has a lot of sundry delicacies from mountains during the summer. Many people living in the city go to street markets to buy them.

Wild fungi and wasp pupas are the most special ones and are considered as important food ingredients in Yunnan cuisine. People may get goose bumps when they see a worm-like wasp pupa. But it is always the best-seller because of its good taste and smell.

Li Longxian, a 37-year-old man from Machu Village who sells wild fungi and wasp pupas in Zhebei street market, gets up at 3 a.m. every morning to look for wild fungi in mountains. He  also cultivates wasp pupa on his own.

“Wild fungi and wasp pupas are only available before the Mid-Autumn Festival,” Li says. His wasp pupas are sold at RMB ¥180 (US $27) each kilogram, much cheaper than those in wet markets in the city.

Not only mountain delicacies, other agricultural products are also popular. Zhao Yufen, a 62-year-old farmer sells corn and chilis in Zhebei street market.

“Farmers rely on mother nature for food. If the harvest is not good, we will have less for sale. The harvest of chili is not very good as the weather is rainy this year,” she says.

Zhao thinks her life is getting better now. “It was hard to sell things in the past because most were poor and only wanted to sell things to make money. But now people have more money to do shopping,” she says.

Wang Hong, a woman from Zhebei village shares Zhao’s feeling. “When I was young, I could not go to street markets very often because I had a big family and everyone wanted to go. It was hard to get a chance.”

But she can go to street markets every weekend now. “Our living quality is better. If my homegrown agricultural products are more than enough for my family, I will go to street markets to sell them. If there is nothing to sell, I just go for fun and buy something to eat, drink, and play,” the 63-year-old farmer says.