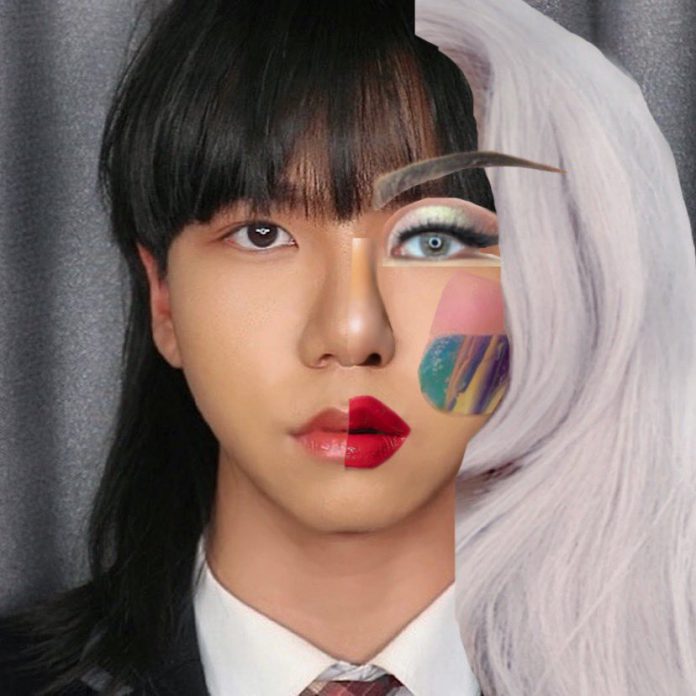 Jung Jong-in starts his day thinking about what makeup he wants to wear every day. “Before I put on makeup, I think of a concept first. From there I start to choose a colour and an accessory that I want to wear,” the 18-year-old drag artist who is also known as Jong-ja says.

“I get inspiration from everything around me. A single leaf falling from a tree can inspire me. After finishing my makeup, I wear a wig that goes well with my make-up,” Jung says.

“I feel thrilled and excited whenever I turn myself from Jong-in to Jong-ja.”

He once was inspired by Beyonce’s performance in a concert. He bought wigs and costumes that look like Beyonce and did make-up just like the American singer.

“I feel thrilled and excited whenever I turn myself from Jong-in to Jong-ja,” he says.

Jung started dressing up and performing as a drag queen after watching a YouTube video a few years ago. “When I first watched a drag queen clip on YouTube, it struck me to core of my heart and I wanted to find out more,” Jung says.

“With strong interest, I started to watch RuPaul’s Drag Race on Netflix. I was inspired by the drag performance and found courage to dress up as drag costume myself,” he says. RuPaul’s Drag Race is one of the most famous drag Queen competition shows featuring drag artists’ fashion, performance, and stories.

Drag queens are men who dress up in fancy costumes to deliver performance.

Dot Face, a South Korean YouTube channel, showcases stories of LGBTQ, drag culture and other minorities who are not widely known to the public. The general attitude is quite negative due to a lack of knowledge of the subject.

Jung points out people have limited access to learn more about drag culture, as their performance can only be seen in clubs and queer festivals.

Due to the lack of understanding, he often comes across with people who ask him questions such as: Isn’t it strange for a man to dress up like a woman? And some would say to him that “Man should be manly”.

“It sometimes discourages me when people criticise my work. But I know I have friends and families who support me. Now, I have the courage and confidence to fight against these negative gazes,” Jung says.

“Why do men need to look like men? What is it like to be a man? I think what I do can also be defined as man. The way you look doesn’t define your sexual identity. Being brave and being yourself is the way to show your personality,” Jung says.

“Before becoming a drag queen, I always felt that part of me was missing. I feel that the mood of the society is suppressing me from being truly who I am. Whenever I am having a hard time and want to let everything go, drag culture lifts me up and gives me confidence,” Jung says.

When performing drag shows, Jung dances, sings, does catwalk in fashion shows, acts, and even does stand-up comedy. He uses the stage to tell the audience to accept drags as who they are.

Yet as a minor, he has limitations in performing drag shows, as most shows are held in bars or clubs. In Korea, youngsters aged under 18 are prohibited to enter bars or clubs. Jung can only perform in drag clubs which are open for teenagers.

Jung has been invited to attend television programmes to tell his story and he also runs his own YouTube channel which now has about 5,000 subscribers.

“A lot of people seem to know drag art exists, as the media reports about it. But judging from comments on YouTube or other social media platforms, many still think it is a shame that I dress up like a woman,” Jung says.

“I am not upset, but I hope they will think differently one day. I want to break the stereotypes. I wish drag culture could be accepted as popular art culture,” he adds.

Jung thinks drag culture does not belittle or ridicule women, but he is aware that it is a sensitive subject.

“I am always very careful and aware about what I say and how I act during my performance and in my YouTube videos. I think that drag artists, including myself, should accept comments by others. This is a lifelong assignment for drag artists,” Jung says.

To those who do not accept the drag culture, Jung says, “Some may dislike us, and I can understand. All of us live in the same world, but how we live, and what ideology we have is a different matter. As long as people respect each other and respect diversities in culture, then it is fine. But it is intolerable to publicly spread false information about drag culture.”

Many drag queens including Jung have lost stages to perform due to the pandemic.

“This is a tough time for me and all the drag artists. I’m pretty sure that is the same for everyone these days. I want to give people pleasure and give them inspiration through my performance,” Jung says.

“I hope the audiences look at me and drag culture without prejudice. The biggest advantage of being a drag queen is that I can be what I want to be. There are so many ways to express myself. The most important thing is I feel happy,” Jung adds.