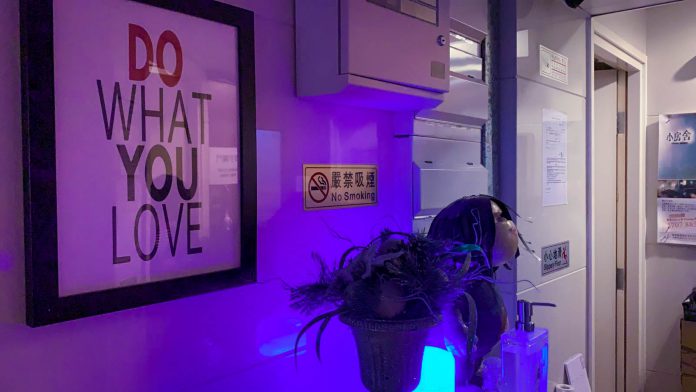 Couples in Hong Kong are finding space to get intimate with their partners.

Charles* is one of the many youths who chooses to enjoy intimacy with their lovers in hotels instead of at home.

The 29-year-old, like many others in Hong Kong, shares a flat with his family. Despite having a room of his own, he still thinks that it is not an ideal private space to “Netflix and chill”.

“I want to keep my sex life and my family life apart,” he says. He considers visiting hotels for sexcation an act of respect towards both his parents and his partner.

“I want to keep my sex life and my family life apart.”

Tommy*, a 21-year-old student who lives with his family, also chooses to visit hotels for sex. He is worried that his parents may return home when he is making love with his girlfriend.

Tommy adds that sexcation allows him to spend quality time with his lover. “It is easier to get flirtatious with my girlfriend when we have sex in hotels rather than at home. The atmosphere is very different,” he says. “It feels like a private space where we can hang out, not just to have sex,” he adds.

The need for private space and privacy leads many youngsters in the city to indulge in their sexual desires at hotels instead of at home. According to a 2016 By-census report, 95 per cent of people aged 15 – 24 in Hong Kong were living with their parents.

Jakub*, a 20-year-old student, who also lives with his family, is a frequent sexcationer. He prefers spending romantic moments in hotels because he wants to have some privacy. “My parents always go into my room without knocking on the door,” he says.

He goes on sexcation at hotels once every two weeks and spends about HK $2,000 per month on accommodation.

Since the pandemic, hotel prices have decreased significantly. The average hotel price per day marked a 13.97 per cent decrease from December 2019 to March 2020 according to Colliers International, a global real estate investment firm.

A weekend getaway in a superior room at the Marco Polo Hong Kong Hotel, a five-star hotel in Tsim Sha Tsui, cost only HK $675 last February.

Jakub thinks that price is a major factor to consider when choosing hotels. “Sometimes I look on sexcation sharing pages on Instagram to find affordable hotels,” he says. Many Instagram pages are set up to share sexcation information, including prices, quality and services of different hotels for sexcationers.

Room Busters is a sexcation sharing Instagram page run by Chloe* and Hugo*. They started the page because they found a lack of sexcation information on the Internet. “Like how a foodie reviews different restaurants, we also review different hotels we visit for sexcations,” Hugo says.

Goopenroom, another sexcation-sharing Instagram page with 11,300 followers, is run by Mr. K* and his girlfriend. Unlike other sexcation sharing pages, they also started a YouTube channel to share video reviews on top of text and photo reviews.

“Photos are not comprehensive enough for followers to get a clear view of the hotel rooms,” Mr. K says. Their videos feature thorough information about hotels, including transportation route, interior design and facilities.

“Many travel vloggers have filmed hotel reviews, but not many film reviews of hourly hotels. We may even be the first to do so in Hong Kong,” he says.

Mr. K and his girlfriend hope to provide more information on budget-friendly sexcation for young couples. “Most youths do not have much money, but they want to visit high-quality hotels at lower prices,” he adds.

Other than four-star and five-star hotels, hourly love hotels are also popular alternatives for sexcationers.

Mansion G Hotel is an hourly hotel co-founded by Jenson* in 2017. It is the first hourly hotel in Hong Kong offering self-service check-in. A passcode is provided to customers prior to check-in through an instant-messaging application. Customers can then use the passcode to unlock the reserved room without any contact with a receptionist.

“Some people feel awkward talking to a receptionist, and not everyone likes to have their sex lives revealed to strangers,” Jenson says.

Jenson reveals that his relatives do not approve of what he does and told him he would end up in hell for operating an hourly hotel. But he does not think so. “Booking a room for sex is just like booking a badminton court for badminton,” he says.

No.7 Fortress Hill Hotel is another hourly hotel that provides contactless check-in service. Yee*, the hotel owner, started a new branch in February amid the pandemic. “The pandemic did not have a significant impact on our business. People have more time to go on sexcations,” she says.

Yee also sells sex toys at her hotel. Customers can order sex toys during room reservation and the toys will be placed inside their rooms in advance. Among different types of sex toys she sells, disposable sex toys are the most popular.

“Customers do not dare to bring sex toys home. Even if they have purchased non-disposable ones, they would rather throw them away after using them than bring them home,” she says. She adds that disposable sex toys offer trouble-free and affordable sexual pleasure to sexcationers.

“Sex is supposed to be something happy, why do people have to act like drug smugglers when they go on sexcation?” she adds. Wong especially appreciates the contactless check-in service offered by some hourly hotels. “It is a nice gesture to destigmatise sexcation. People can just go there to relax and be in control of their privacy,” she says.

“Sex is supposed to be something happy, why do people have to act like drug smugglers when they go on sexcation?”

Wong points out that the need for sex and intimate space is always there, but the rise of sexcation sharing pages on social media has brought it to light.

“Being potent and sexually desired is great in our society. But at the same time, sex is still considered something shameful to talk about,” she adds.