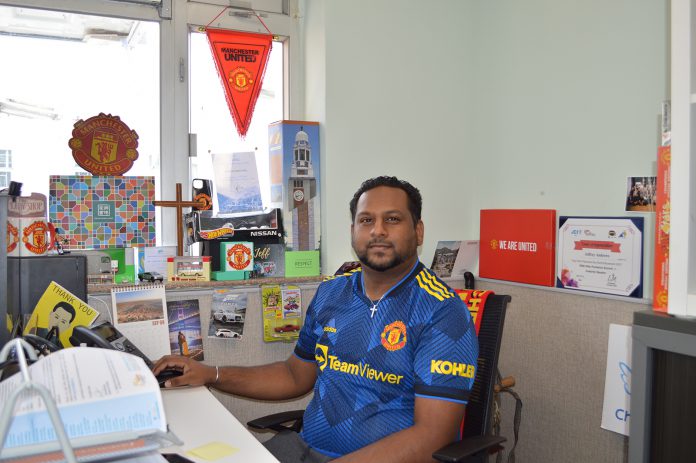 The city’s first registered social worker with an ethnic minority background, Jeffrey Andrews, shares his experience in raising a voice for a multicultural Hong Kong.

Jeffrey Andrews, Hong Kong’s first registered social worker with an ethnic minority background, has been serving ethnic minorities and refugees for around 12 years. Nicknamed “Jeff,” he ran for the pro-democracy primaries last year, hoping to win a seat in the Legislative Council.

“I stand for unity in diversity, and I feel the need to be a voice for ethnic minorities, which is why I wanted to stand for the election,” he says.

After the primary election, Andrews and 52 pro-democracy figures, including activists, politicians and academics were arrested by the National Security Department of the Hong Kong Police Force on January 6, 2021. He was later charged with “conspiracy to commit subversion”.

On bail at the time of the interview, Andrews, who considers himself a Hongkonger with an Indian descent, says he cannot disclose details regarding the charge and arrest. But he is determined that the arrest will not stop him from continuing to help other ethnic minorities and refugees in the future.

“Even with what happened to me, I still believe there should be an ethnic minority representative in Hong Kong. I might not [run in the election] again, but we still need a voice,” Andrews vows.

“I am confused about the future and [my feelings for Hong Kong], just like everyone else, but Hongkongers have gone through so much, like the SARS and economic crises, we somehow just get on with it. I still have so much faith in this Hong Konger spirit,” he adds.

“I stand for unity in diversity, and I feel the need to be a voice for ethnic minorities, which is why I wanted to stand for the election.”

From Gang Member to Social Worker

Becoming a social worker was never on young Andrews’ mind. Growing up in the 1990s, he went to a school which had many non-Chinese-speaking (NCS) students, commonly referred as “designated school”.  The term was later abolished by the Education Bureau in the 2013/14 school year to remove the misconception arising from the label.

Students studying in designated schools were assumed to finish their school days at the age of 15 or 17 as they finished Form 3 or Form 5 at best but students in other schools would continue their studies.

“In Form 5, when [my classmates and I] left the school with public exam results…there were gang members outside, trying to recruit us. They asked: ‘Why do you want to study when you can make money this [easily]?’ And many of us ended up joining them, including me,” Andrews recalls.

Led astray, he wasted two years of his life as a gang member. The wake-up call, Andrews says, was when he got arrested for theft at the age of 19.

“It was 4 a.m. in the morning. I did not want to call my parents, so I ended up calling my social worker, Fermi Wong. It was God’s intervention for putting [her] number in my head, because back in the day, we had no cell phones, and I still remember her phone number to this day,” Andrews chuckles.

Since then, the once troubled teenager grew a strong desire to become a social worker like Wong, the founder of Hong Kong Unison, who protects the rights of ethnic minorities. Because of his cultural background, Andrews believes he is the perfect fit to help other ethnic minorities like him.

In 2011, 25-year-old Andrews enrolled in a part-time social work programme at the Caritas Institute of Higher Education. He was one of the first three ethnic minority students to study this programme — now, there have been 17 more since Andrews graduated in 2014.

After three years, Andrews graduated and became a registered social worker. He joined Wong, and together, they supported the forgotten and excluded people in the city.

Now 36, Andrews spends most of his time at Chungking Mansions, home to low-budget hostels, restaurants, and shops mainly opened by Africans and South Asians. Andrews is the co-manager at Christian Action Centre for Refugees, a non-governmental organisation (NGO), which is located on the 17th floor of the building.

Andrews regularly organises guided tours of the building for students, volunteers, and even corporate leaders. As he led a group of Youth Men’s Christian Association (YMCA) volunteers touring inside the building on the day of the interview, he greeted almost every resident passing by whom he called them “brothers” or “uncles”. He introduced their background and culture to the volunteers in fluent Cantonese.

To Andrews, Chungking Mansions is much more than a place for curry or currency exchange. Starting from this building that many locals are intimidated by, he wants to bridge the gap between ethnic minorities and local Chinese.

He believes a big step moving forward was achieved two years ago during a protest.

“In the challenging times we are in, people understand and relate to ethnic minorities, who have been struggling for all their lives.”

On October 20, 2019, during the period of anti-government protest, a group of ethnic minorities, including Andrews, stood outside Chungking Mansions and distributed drinking water to protesters.

“[The support] was so amazingly well-received that many people wanted to check out us and Chungking Mansions, so we did tours for them too,” says Andrews, pointing at a picture of a long queue outside the building for the tour.

“In the challenging times we are in, people understand and relate to ethnic minorities, who have been struggling for all their lives,” he adds.

At the time of the interview, Andrews was still anticipating his next bail report on October 21, 2021.

“I do not know what will happen to me on [that day] but let me just leave a legacy as far as I can and see where it takes me. I just keep my head down no matter what,” the 36-year-old says.

Despite the uncertainties, Andrews vows to make Hong Kong a better place for ethnic minorities. He wishes schools will incorporate guided tours to Chungking Mansions into their curriculum.