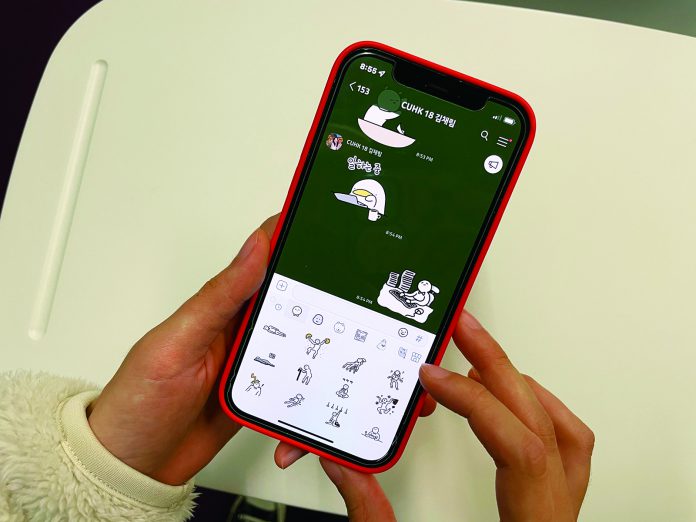 Emoticon is popular among Koreans for its cute and delicate way of delivering emotion.

Kim Kang-eun is an emoticon collector, and she has 33 series of different emoticons in her KakaoTalk account, the most popular instant messaging application in South Korea. As there are at least 24 emoticons in one series, she owns nearly 1,000 emoticons.

“My favourite emoticon is ‘I’m a university student’ series designed by Yurang. There are 24 animated emoticons in the series, featuring university life such as staying up late, doing assignments, skipping lectures, and stressing out because of grades.”

“It speaks my heart as a university student,” Kim says. She says emoticons help her express her emotion better than words.

“Emoticons can deliver delicate feelings that words cannot. Plus, they are very cute,” Kim adds.

According to Adobe’s ‘Report on Global Emoticon Trend’ published in July 2021, emoticon usage was 10 per cent higher in South Korea than the worldwide average. About 76 per cent of Koreans use emoticons instead of words in online communication.

Moon Jong-beum is the creator of the emoticon series ‘Platypus Ogu’. He studied pottery and started designing emoticons since 2017.

“I started designing emoticons after reading an article about emoticon designers making a fortune. I thought it was worth a try since I studied art in college,” the 31-year-old designer says.

Ogu is Moon’s most popular emoticon character and one of the most successful emoticon characters in KakaoTalk, with at least 30,000 series sold monthly. Each series is sold at 2,500 won (US $2.5). The series is very popular among young Koreans for its cute and simple design.

“Ogu was originally designed for a lamp. I thought the platypus tail resembles a lightbulb,” says Moon. “I turned it into an emoticon, as I thought it was cute too,” he says.

“I feel so happy because many people love Ogu. And I am happy too, as there is no cost such as rental spending and material cost when I design emoticons,” says Moon. “All I need is a tablet PC. The income also makes me feel happy,” he chuckles.

Moon shares that the hardest part of creating emoticons is giving them ‘emotions’. “Anger, for example, can be expressed in so many different ways. I have to find the right expression for each emoticon,” he says.

“I want to show something new when I create a new series,” says Moon. “I have created more than 20 Ogu series now. I do not want to reuse expressions that have been used before,” he adds.

Moon recommends his job to people who are patient and enjoy drawing. “You have to draw the same picture over and over again, so patience is crucial,” he says. “I draw at least 100 sketches for one series.”

Before an emoticon is available for sale in KakaoTalk Emoticon Shop, it has to go through rounds and rounds of evaluations by Kakao Emoticon Studio. “One of my emoticons was passed after being submitted 14 times,” says Moon.

The popularity of emoticons allows some successful emoticon designers to expand their business such as mobile games, merchandises, snacks, clothing and so on. Moon also opened a pop-up store in May 2019 and sold stationery products and small cushions that have Ogu on them.

Moon’s creation, Ogu, started from a lamp, then an emoticon, and soon it will be a game character. He is currently launching a mobile game featuring Ogu.

“I am developing the game for franchising Ogu,” says Moon. “Mario and Pikachu were first introduced as game characters and are now known worldwide,” he says.

“I hope Ogu can be the ‘Snoopy’ of Korea, giving heart-warming messages and love to all generations,” he says.

Professor Yun Min Hie, who researches formative arts in the College of Art and Design of Kyung Hee University, says emoticon is not a new creation.

“Images were used to deliver meanings before language was used. Emoticon may seem like a fairly new concept, but its origin goes back to the ancient time,” she says.

Yun points out that emoticons were first used in the 1990s in South Korea when PC communication emerged.

“People began using symbols like ^^ and -.- to represent facial expressions. That is the origin of the modern emoticon in Korea,” Yun says.

“Koreans call themselves ‘the people of jest’. We like to find humour in everyday life, even in bad situations. Emoticon fits just right with the Korean lifestyle by making the conversation funnier,” Yun says.

“There is no limit in the growth of the emoticon industry,” says Yun. “It is diverse, it is effective, and it is cute.”

“Emoticon fits just right with the Korean lifestyle by making the conversation funnier.”