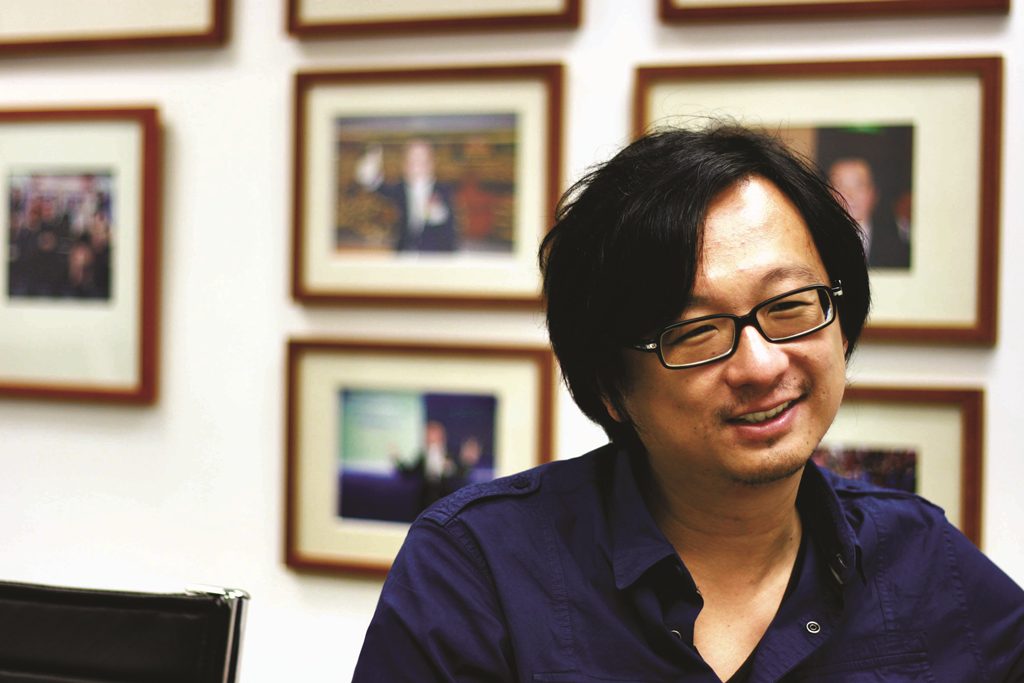 The 40-year-old man sitting cross-legged at the conference table speaks calmly and smiles warmly. He has the air of an intellectual but would not otherwise stand out from the crowd. He is Chang Tieh-chi, the renowned Taiwanese cultural commentator, author and now the editor-in-chief of the iconic Hong Kong monthly, City Magazine. Twenty years ago, he was a bleeding and beaten mess, a student activist campaigning on the frontline for the University Bill to be passed into law to bring democracy to the campuses in Taiwan.

Although his protests today are more likely to be made through print, Chang is still a rebel who does not want to set limits on his life.

Chang was born in Taipei to a blue-collar family in 1972. His grandfather was a Kuomintang (KMT) veteran who fled from the mainland to Taiwan after the 1949 Chinese Civil War. He was raised in a juan cun or military dependants’ village, made up of clusters of ramshackle housing built as temporary shelters for KMT soldiers and their families. In these settlements, the KMT families, all mainlanders, were largely segregated from the local Taiwanese communities.

“There is an invisible line between juan cun and the local community,” says Chang. The juan cun embody one of the core tensions in Taiwan – the gulf between the post-1949 mainland arrivals and the local Min Nan communities. But Chang never felt discriminated against or isolated, or that there was a boundary between his community and the world outside it.

“I did not feel distanced from my friends … I would use their native language, which is Taiwanese to communicate,” he says.

While children might not be fully aware of such a complex social reality as the relationship between juan cun and the rest of Taiwan society, they could not fail to be shaped by their family environment. Chang’s parents were divorced when he was 14, leaving his father to raise Chang and his younger sister.

“My father is good at doing housework. He took very good care of us. Sometimes, I thought he did too much, was too indulgent of us,” Chang laughs.

He is grateful to his father for creating a liberal and caring environment. “My father encouraged me to do whatever I want,” he says. Chang’s passion for reading was influenced and supported by his father. Their humble life did not stop Chang’s thirst for knowledge but instead sowed the seeds of rebellion and his worldview.

In contrast to the freedom he enjoyed at home, school life under martial law was very restrictive. The ruling Kuomintang had declared martial law in Taiwan after retreating there in 1949. It meant authoritarian rule and suppression of individual freedoms, and is remembered as a period of “white terror”.

As a youngster, there was little Chang could do to resist martial law, but he was always rebelling in small ways, trying to stand out from the crowd. For instance he had his school uniform made in a slightly different colour, rode a motorcycle in senior high school although it was forbidden at the time and skipped classes to read in a bookshop.

“Martial law was not just a political suppression. It was imposed on your daily life and morality,” Chang recalls. In the 1980s, not only did hairstyles and uniforms have to be perfectly standardised, but it was also very common for teachers to beat children. “It sounds ridiculous, but it was obvious they wanted to control your heart by controlling your appearance,” he says.

Feeling suffocated under the control of an authoritarian government, rock music provided Chang with an outlet and a glimpse of an alternative world – a world of rebellion and resistance. The young Chang listened to musicians like Bob Dylan, John Lennon and Patti Smith. He was fascinated by the implicit anti-establishment messages of rock music – freedom, socialism, revolution and passion for life.

“Pop music is vulgar, it’s merely for sales in the market. Rebels should listen to rock music,” he insists. Rock music gave him the courage to take a further step and join protests when he started university.

Chang says that when he entered the Department of Political Science at National Taiwan University in 1991, he was desperate to learn more about the world. He was keen to be a participant in making Taiwan’s history. All the time, he was asking a naive yet complex question: what is the most perfect and feasible political system in this world? Contemplating everything from Marxism to capitalism, he was searching for a model that could lead to an ideal society, one that could maintain a balance between equality and liberty.

Chang recalls the turning point of his campaigning life. “In an orientation activity, seniors played a documentary. I was very touched, I cried. I saw students being beaten up and expelled,” he says. The documentary was about the Taiwan student movement.

Later, as the president of a student activists’ group “Continent”, Chang protested on the streets and supported various social campaigns. In his eyes, the Kuomintang regime of the 1990s was a dictatorship that violated basic human rights. At that time, no university student would support the ruling party. They all fought for the opposition camp.

But this was no easy feat for someone from a Kuomintang family. Chang sometimes felt isolated from his family and relatives because they supported the blue camp and disliked student movements. But he never debated or argued with his family.

At reunion dinners, when his relatives were discussing politics, he would eat in silence. When he first took to the streets, he would hide his face behind banners to avoid the cameras, just in case his family recognised him on television.

Chang loves and respects his family but he says they never understood his stance. “It is not a choice; I do not choose whether to side with them [my family]. It is just that the world you understand is different from theirs.”

The urge to speak out and act has led Chang to try many different things. After his studies, Chang became a writer and magazine editor. He became well known as a writer of cultural and political commentaries about Taiwan and mainland China. In 2002, he embarked on a doctoral degree in politics at Columbia University. While his interests take in politics, music and literature, his social activism and the desire to make a difference and change the world informs all areas of his work.

When Chang’s first book, Sound and Fury: Can Rock Music Change the World?, was published  in the Mainland in 2008, it sparked much positive public discussion there and Chang became one of the few Taiwanese to write political commentaries there. Some of his friends were worried he would be restricted by censorship, but he thought differently.

“I wanted to give it a try … I wanted to bring some stimuli to this conservative community,” he says. Since then, he has strived to be a “bridge” across the Taiwan strait. Chang has also written about China in Taiwan, combining his knowledge of political theories and his understanding of public concerns in both Taiwan and the Mainland to write insightful political commentaries. Chang says he identifies with the anxiety that those who strive for democracy in the Mainland feel, because they are the same anxieties that democracy activists in Taiwan felt when it was undergoing its own transition. It is the anxiety borne of uncertainty of what the future holds and where the nation is headed.

Chang is never one for complacency, he is never satisfied with the status quo. “When I have settled, I feel bored,” he says. Instead, he enjoys stepping out of his comfort zone and discovering the consequences. “I love new challenges and stimuli … to absorb new nutrients.”

So, when Hong Kong’s City Magazine invited Chang to be the editor-in-chief in 2012, Chang accepted. Founded in 1976, City Magazine was Hong Kong’s first avant-garde magazine, covering the local cultural scene. Chang was intrigued but he was also worried. His appointment happened at a time when local identity and consciousness was at the forefront of debate and discussion and he wondered whether Hong Kong readers could accept him as an outsider.

“So, I needed to make City Magazine more radical, to be more Hong Kong than Hong Kong,” he says. Under his leadership, the magazine has become more diverse. It features writers from the Mainland and from Taiwan, while the stories are more timely and topical, they follow social issues more closely.

In its January issue, City Magazine ran a cover story on Scholarism and national education under the headline “Young Power”. The February issue was on gay rights. Chang’s approach has been a success, with some readers remarking, “City Magazine is back!” Chang is proud that the publication provides readers with insightful coverage of social phenomena and has expanded its focus beyond the boundaries ofHong Kong.

Chang senses that Hong Kong people have the same identity problem as he does, and he does not think it is limited to Hong Kong people. He believes people in Taiwan and the Mainland are also resisting superimposed identities. He believes there should be a platform to express these “creative yet marginalized” voices and consolidate them into a stronger force.

“Another world is possible,” Chang says. “I am obsessed with everything about revolutions … to break the old things. When innovative things occur, I am very excited.” Chang has big dreams. He would like to have a more equal and liberal world but he also believes there will be a long journey before the dream is realised. In the meantime, he will not panic or be disheartened when setbacks occur. The quiet intellectual may no longer resemble the firebrand student but the fire still burns inside. “There are some things you need to do to make a life meaningful. Things that that can change the world.”

The earlier version of this story and the print edition contain some errors. Chang enrolled at Columbia University in 2002, not 2012. His book Sound and Fury was first published in Taiwan in 2004 and in the Mainland in 2008. The City Magazine issue on gay rights was published in February. We apologise for the mistakes and always strive to ensure our stories are accurate.