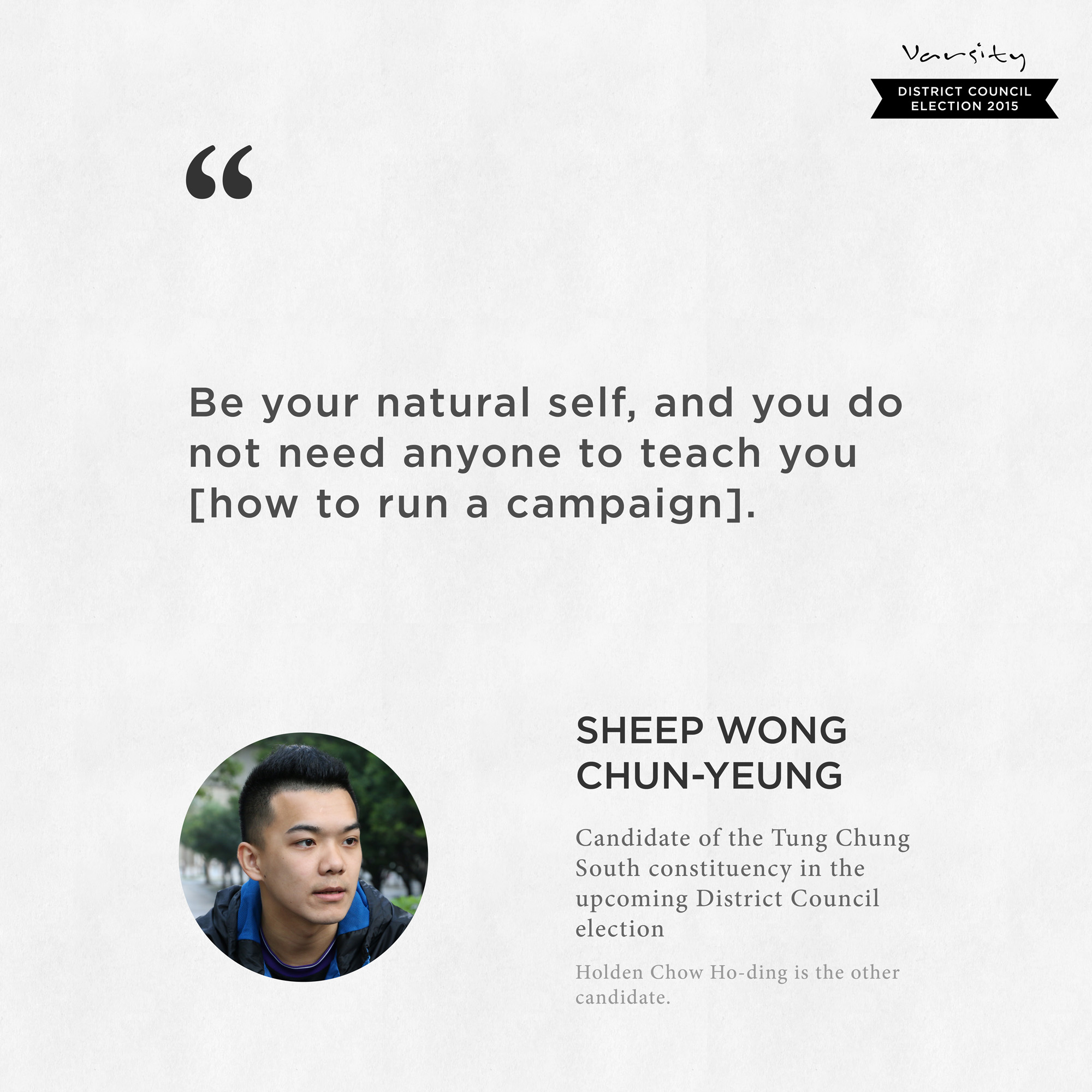 Sheep Wong Chun-yeung sits on a bench in a park surrounded by the high-rise buildings that make up the Tung Chung Crescent, He is wearing comfortable sportswear that hints at his youth, and exhibits a steady composure.

The 21-year-old Wong is a District Councillor candidate standing in Tung Chung South, and he also serves as the Community Development Officer for the community organization Tung Chung Future. He focuses on reviewing infrastructure projects that affect the livelihood of Tung Chung residents, and alleviating the impact of other local problems like rising prices.

Varsity met Wong earlier in January to observe how the Occupy Movement last year motivated youngsters to participate in politics.

At that time, he was worried about running his campaign without guidance from veterans. “We did not know our direction or how to enhance our popularity and familiarity in the district,” Wong says. Earlier in his campaign, Wong campaigned the traditional way, like printing his wordy manifesto on flyers.

But those mostly went in the bin. So instead he addressed people’s doubts directly on the handbills – whether he is too young and inexperienced, and whether he has enough resources.

“The advertising effect is rather good…more people approach me when the new handbills are distributed,” Wong says. “This is good enough; no matter whether they come to question me or to criticize me.” He says it is important to get people’s attention because his team has been around for less than a year.

Proving his credibility and calibre is as important as getting attention, Wong says. He recalls a resident who challenged him by questioning whether he could deal with noise pollution that would come from nearby air traffic if the Third Runway got built.

Wong responded months later with a successful application for a judicial review of the project’s funding, which earned him compliments from the people who doubted him at first. This brought him more support among the constituency.

“Because of this, I eventually become confident of myself, though there were still occasional moments when my team and I were very distressed,” Wong explains.

Wong admits that he is not as educated as his competitor, Holden Chow Ho-ding, the vice-chairman of the Democratic Alliance for the Betterment and Progress of Hong Kong. Wong left school after getting his Diploma of Secondary Education, while Chow is a solicitor. But Wong firmly believes his aspiration and efforts will make up for this.

Looking back on the previous ten months, Wong no longer seeks professional input as he did when Varsity interviewed him earlier this year, because he says the opinions of so-called “experienced people” are incompatible with those of the new generation to which he belongs. “Be your natural self,” he concludes, “you do not need anyone to teach you that.”

At present, Wong says he has just as much of a chance of winning as Chow. Wong promises that he will continue to serve the community, promote democracy, and join the next election if he loses the one on Sunday.

Wong’s greatest aim is to encourage as much civic participation as possible. “No matter if one votes me or Chow, participation is the most important.”