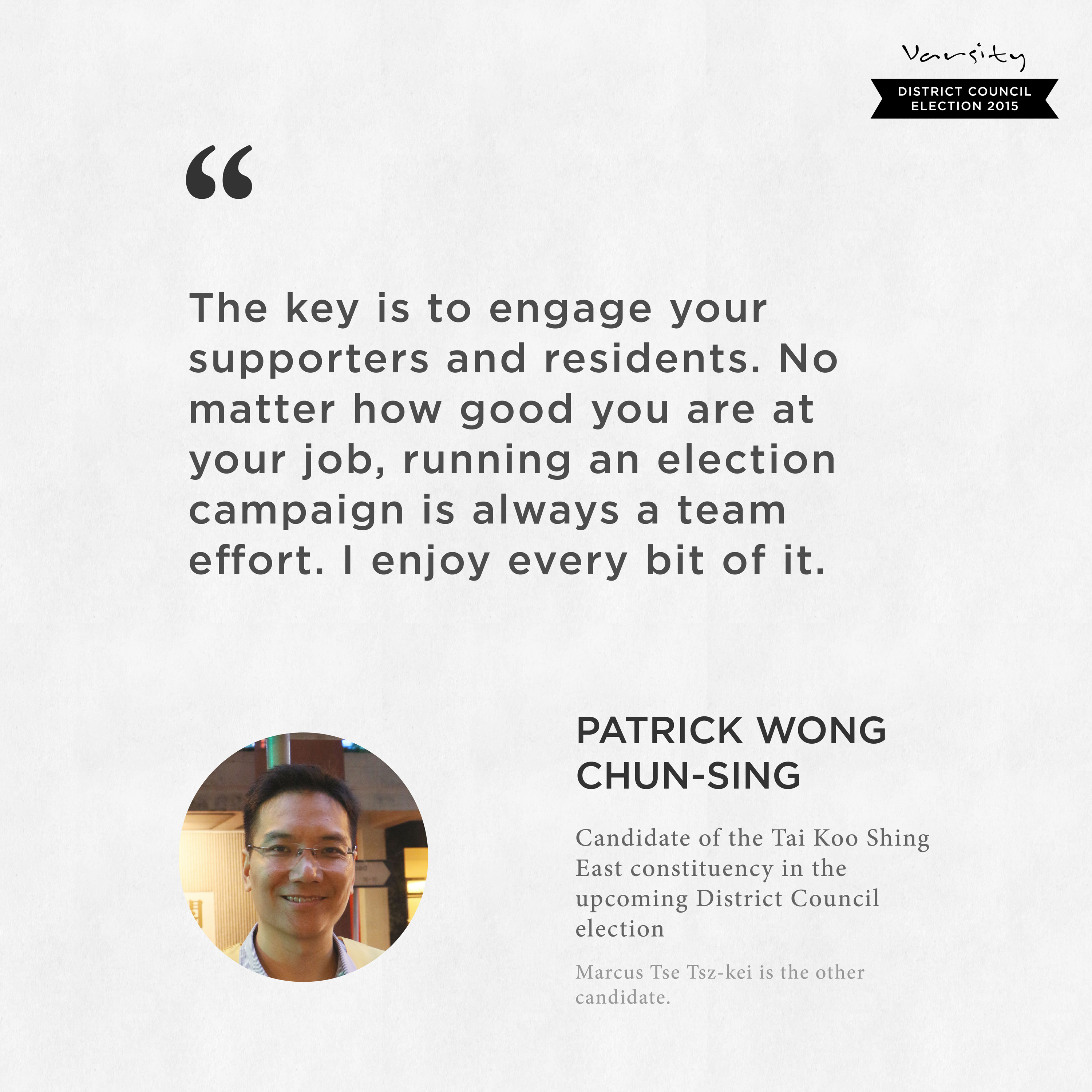 On a weekday evening before the election, Patrick Wong Chun-sing distributed flyers next to Taikoo Shing Road, not far from his competitor Marcus Tse Tsz-kei from the New People’s Party. Several residents stopped to encourage him and tell him they are already familiar with his platform.

“I know many residents living in Tai Koo Shing East and some of my secondary school classmates and teachers also live here,” Wong says. The 40-year-old civil engineer was born and raised here and moved out only a few years ago because of family reasons. “Many of them said they support me when I decided to join the election.”

Professionals have been participating more actively in social movements, as society became more politicized. Wong was president of the University of Hong Kong Students’ Union in 1997, and his passion for politics was reignited in 2012.

“Fewer and fewer politicians and officials are willing to speak the truth,” Wong says. “The problem got worse after the national education incident in 2012.” For example, Wong explains how the government blamed the plumber at the beginning of the recent lead-water crisis, while trying to hide loopholes in the system of oversight.

Wong would like to bring integrity into the District Council. He believes the public still trusts professionals like him because integrity is one of their core values. Wong also thinks that being an independent candidate gives him an edge, as political party members sometimes have to toe the party line even if it goes against the interest of their constituents.

Wong says his engineering expertise would help him serve the district – for example, he can monitor building works and road constructions. As an engineer, he says he understands how much local infrastructure costs, and how to design it well. He points out how a recently-built pavilion that could not shelter people from the rain, was quickly demolished. The public still does not know how much it cost.

“A professional engineer would not allow such a construction to happen,” Wong says. Wong adds he will make official Council spending much more transparent, because he says the people can only hold their Councillors accountable when they have all the details.

Apart from serving the district, Wong’s election platform also focuses on fundamentally changing the electoral system. He supports genuine universal suffrage in the elections for the Chief Executive and the Legislative Council, as well as scrapping functional constituencies.

Residents in Tai Koo Shing East are mainly middle class, and Wong says most of them have strong views on district issues as well as the electoral system. “They seldom scold each other over differing views. I enjoy having rational discussions with them,” Wong says, recalling his experiences of talking to both supporters and opponents. “The discussion is fruitful.”

He does not want to speculate on his chances of winning the election on Sunday, and promises he will continue serving the district through Our Community at TaiKoo (OCTK). He founded OCTK with his friends earlier this year, and OCTK organised activities and lectures in the community to bring people together and make them aware of social issues. Wong says it is too early to decide whether or not he will join the next election if he loses this one.

Wong’s participation may have set a precedent and encouraged professionals to run for election. “I have faced many new challenges upon joining the election for the first time, as I have to handle huge campaign workload within a short period of time,” Wong says.

“The key is to engage your supporters and residents,” Wong adds. “No matter how good you are at your job, running an election campaign is always a team effort.”