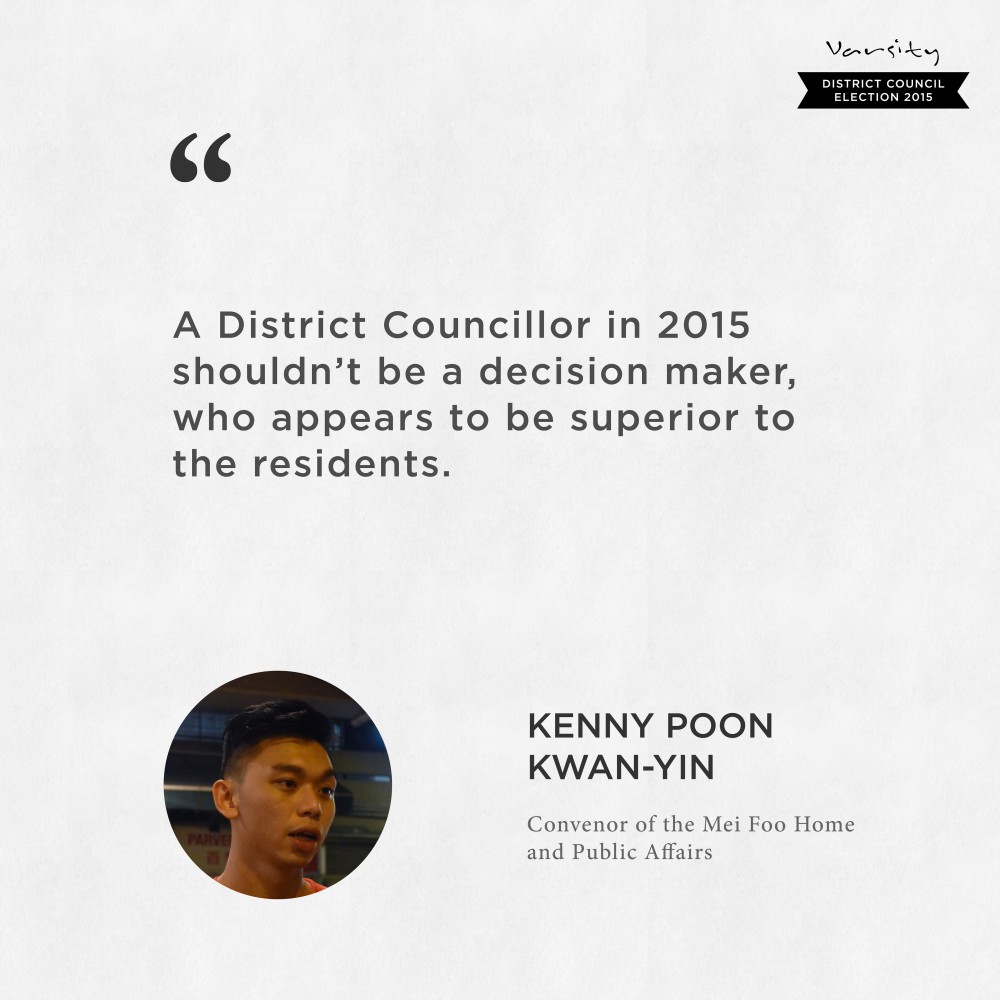 Mei Foo Home and Public Affairs experiment with new ways to arouse civic awareness and contribute to the community.

Kenny Poon Kwan-yin was anxious. The 28-year-old convenor of the group Mei Foo Home and Public Affairs was organising a football watching  party. This was the first time they had such an event  under a bridge, an often-ignored public space. Plus, Poon had no budget and was not  sure how many people would show up.

Finally, more than 500 residents of Mei Foo Sun Chuen gathered for Hong Kong’s World Cup qualifier against China. As the match ended with a 0-0 draw, the audience chanted slogans and waved Hong Kong flags – it was just like being in Mong Kok stadium where the match took place.

Varsity interviewed Mei Foo Home and Public Affairs soon after solicitor Kevin Yam Kin-fung started the community-based concern group last December. Yam hoped to engage residents about the city’s democratic development and district affairs after the Occupy Movement ended. Since then, Poon has been active in the group.

In the upcoming District Council election, Mei Foo Home and Public Affairs does not have a candidate, nor did they endorse one,  despite their active participation in various issues in the community, like petitioning for the management company to test for lead in tap water.

Instead, the group hopes to promote civic awareness. As the election approaches, the group set up booths to try and get residents interested in voting by asking them basic questions, like which constituency they belong to, and how much is the salary of a district councillor.

Poon says the group aims to monitor the performance of the District Council.

“We do not need district councillors to decide everything for us,” says Poon. “We can use our own knowledge to think of ways to allocate resources effectively.”

As citizens can just go online to find out how much the District Council is spending on its projects, Poon says the group would use that access to introduce a bottom-up approach in policy-making.

“A district councillor in 2015 shouldn’t be a decision maker who are superior to residents,” Poon says. He says now is the time to change that image and to encourage more civic participation.

However, he is sad to see that many of his neighbours do not really care about the first election after the Occupy movement.

Poon says some residents do not even know the current district councillors, who are supposed to have represented them in the political system for four years,“I think their worst reaction is to feel indifferent”.

That partly explains why the community group organized the football screening party: Poon says he wants to bring members of the community together. He also hopes the event can become a “seed” to lead residents to get more involved in district affairs in the future.

Wearing a red T-shirt with the word “extraordinary superb” splashed across it, Poon enjoyed the joyous atmosphere at the match screening. But now, he’s anxious again, “what I’m most worried about is the voter turnout, which has always been low”.