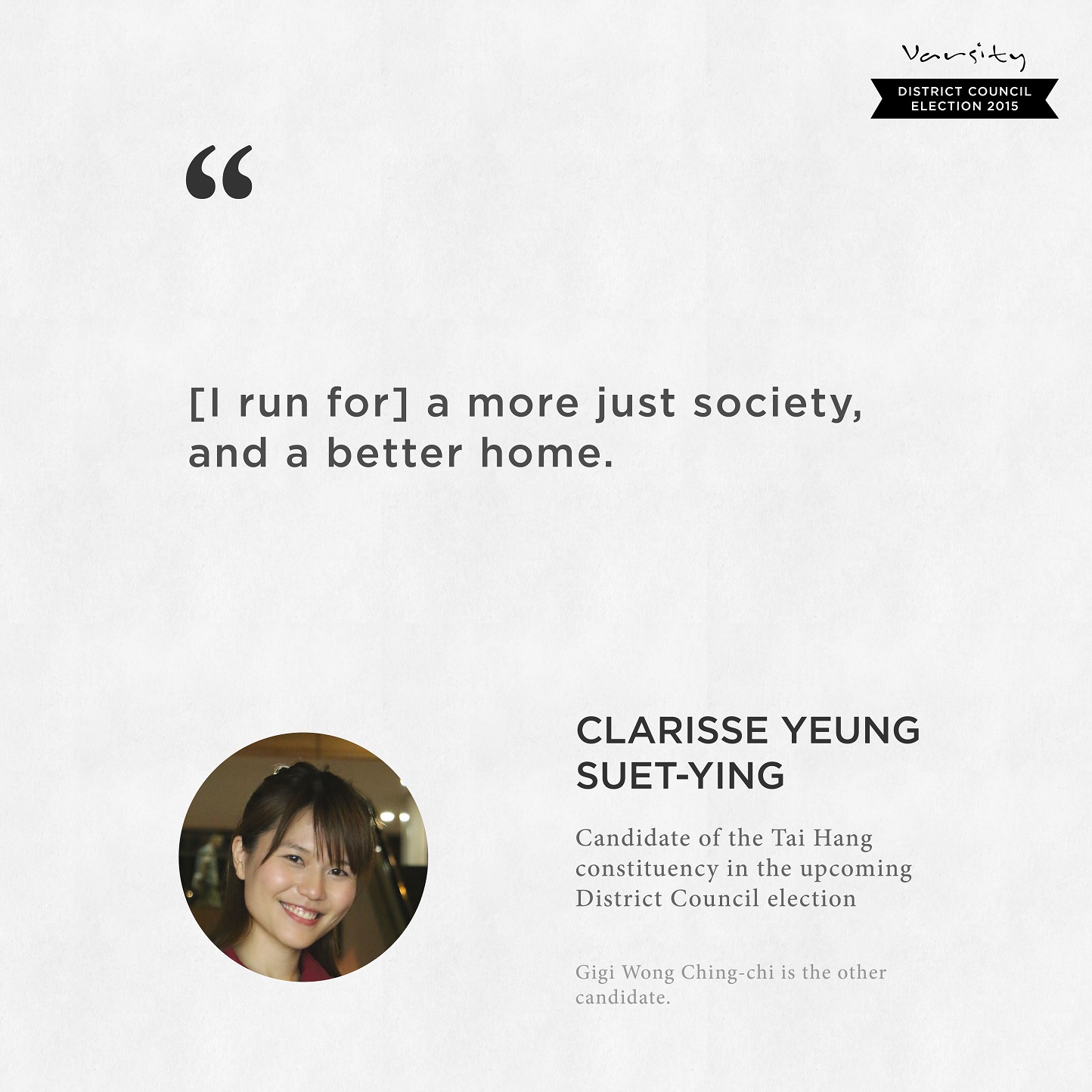 A dog and a rat, buses and cars – these specially designed foam boards are supposed to show what residents of Tai Hang care about. That’s where the independent candidate Clarisse Yeung Suet-ying is running in the District Council election this Sunday.

Varsity spoke to the cultural advocate back when she co-founded the Umbrella Movement Visual Archives and Research Collective last year. She and her team systematically curated protest art, and tried to show them in exhibitions.

However, Yeung does not identify herself as an “umbrella soldier” because she says the movement isn’t what made her run for district council. Back in 2012, Yeung had already helped her friend run for the Sports, Performing Arts, Culture and Publication Functional Constituency in the Legislative Council (LegCo).

Yeung decided to take a more active role in politics when LegCo’s Finance Committee passed the budget of the Northeast New Territories Development Plan last summer. She says the decision was taken without due process and gave her the impression that the council is falling apart.

She says the best way to change the system is join it. As a part-time lecturer teaching cultural policy at tertiary institutions, Yeung has many ideas about community and she thinks the people shouldn’t just be “represented”.

Yeung has been actively engaging residents while building a platform. One of her proposals is to set up a pet garden – the local dog owners have been demanding one for a long time, but without success.

Yeung has had to learn how to bring her lofty ideals back down to earth. She says Tai Hang is a diverse community – “a place where the elderly, children and dogs live together comfortably,” and the people should not be lectured to. Instead of passing out wordy leaflets, she visualizes her plans, making use of her artistic background.

Yeung says that local residents appreciate her efforts; more and more of them are joining her team of volunteers. Some even donate to her campaign. During our interview, a secondary school student gave Yeung a birthday card, cheerfully saying her parents would definitely vote for Yeung – their first vote after moving to Tai Hang almost a decade ago. Yeung just turned 29 this Tuesday.

Despite all the talk of policy, some voters just have one question: is this candidate a “yellow ribbon” or “blue ribbon”? – labels commonly used to distinguish the pro-democracy and pro-establishment camps since the Occupy movement.

“Tags don’t matter at all,” Yeung says, “(What is) important is that we work for the common good of Hong Kong”. She says if she loses, she will keep looking for ways to contribute to the community.

As the election approaches, Yeung is physically exhausted. But she says it’s worth it because she’s working “for a more just society, and for a better home”.

Gigi Wong Ching-chi is the other candidate.