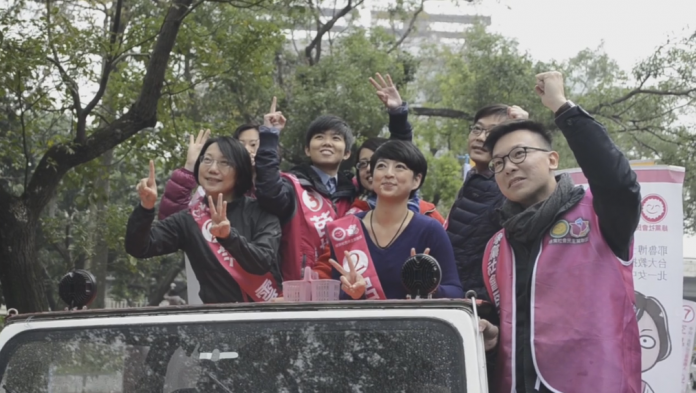 From the barricades to the ballots, 2016’s legislative yuan polls became a battlefield for post-sunflower small parties who hoped to make inroads in Taiwan’s politics.

Taiwan’s political landscape has long been dominated by two main camps, the pan-blues led by the Kuomintang (KMT) and the pan-greens, led by the Democratic Progressive Party (DPP).

The so-called Sunflower Movement of 2014 has changed that picture. Not only did the student-led protests against a controversial trade pact with China highlight a desire for change in Taiwan politics, it also got more people involved in working for the change they wanted. In the post-sunflower era, young activists and civil society advocates have formed new parties, bringing fresh faces to the political scene.

These small parties first gained public attention in 2014’s nine-in-one elections – which elected local officials such as municipal mayors and councillors. They hope to bring attention to unresolved social issues and chart a third path in Taiwan politics.

After eight years in power, public dissatisfaction with the KMT grew due to its failure to turn the lackluster economy around and its stance on cross-strait relations. But not all Taiwanese were ready to fully trust the DPP because of its cosy relationship with corporations and the track record of disgraced ex-president Chen Shiu bian. Into this mix, the emergence of small parties offered an alternative choice for voters looking for a “third force” to bring change to Taiwan.

The first nationwide vote since the nine-in-one elections, 2016’s Taiwan presidential and Legislative Yuan polls were seen as a litmus test on whether the Sunflower social movement has had a transformative effect on Taiwan’s political landscape. It was also a test on whether the newcomers could win public approval and chip away at the dominance of the two major parties.

Although the New Power Party managed to win five seats in the parliament, the DDP and the KMT still hold majority of seats – 103 out of 113. But the fact that the NPP managed to become third biggest party already marks a major shift in Taiwan’s political landscape. An unprecedented 28 parties fought the 2016 legislative yuan polls, and small parties faced an uphill battle in the race. In addition to the lack of financial resources and manpower, Taiwan’s voting system also makes its harder for small parties to enter the yuan. Electoral laws designed to favour a two-party system means small parties candidates have to face barriers as soon as they enter the election process.

Every party must first pay a NT$ 200,000 deposit for each candidate to just participate in legislative polls. This sum poses little problem for large parties who already have seats in the 2012-2016 legislative term. If a party had obtained more than 5 percent of total votes in 2012’s polls, it could get an annual subsidy of NT$50 per vote over the four-year term – more than enough to cover the election deposit.

This deposit cuts deep into the pockets of small parties, many of which run solely on donations from supporters. Many of the candidates were left with limited funds to run their campaigns after paying the deposit. Although the threshold for subsidy has been lowered to 3.5 percent for 2016’s polls, funding problems still remain a big obstacle for small parties when most small parties couldn’t reach this ratio. In 2016’s election, the New Power Party is  only party apart from the long-established DPP, KMT, People First Party and New Party that has passed this threshold. The 113 legislative seats are divided between district-based and proportional allocated legislator-at-large seats. The small number of seats creates large districts which favor incumbents, who have more resources and local contacts. The small amount of proportionally representation seats also means each party can only get a limited number of seats even if they passed the 5% threshold.