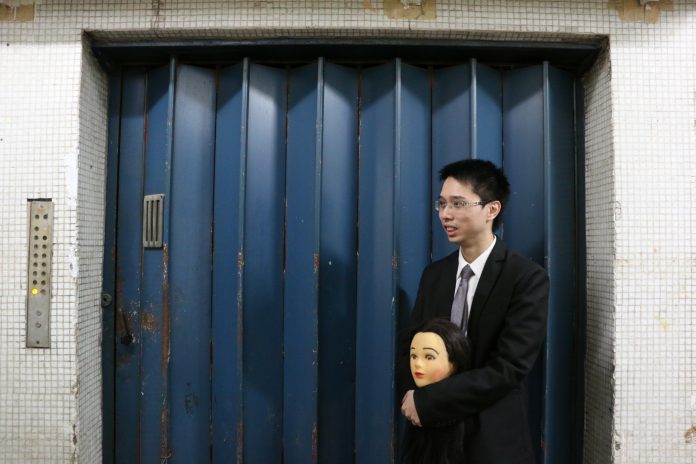 Accidental internet celebrity Yuen Man-tai is a writer at heart

“Three. Two. One. Action!” The camera starts recording and a nerdy young man wearing an ill-fitting suit and metal-rimmed glasses starts giving “expert” advice on relationship problems, despite the fact that he has never been in a romantic relationship. If it sounds absurd, it is meant to be, for the loveless love guru known as Expert Dickson has struck a chord with Hong Kong netizens and struck gold for 30-year-old Yuen Man-tai.

Expert Dickson is one of the most popular characters created by 100Most a media company that publishes a satirical youth magazine and produces online parody songs, skits for its satirical news channel TVMost.

Dickson first appeared on TVMost’s News at About 6:30 in August last year. He was asked as a “love investment expert” to comment on a real case in which a young man spent HK$400,000 to propose to his girlfriend. His response was to open with the comment: “From a business point of view, marriage is like a merger of two companies. The buying party must take into account the value of the other party’s total assets to make long-term profit projections.” And then he went on to analyse the merits of the “deal” at hand.

The character was an instant hit, prompting 100Most to develop Expert Dickson and put him in more videos. Projecting a quality referred to as “toxic”(毒), which is usually used to describe males who are more comfortable with computers and geeky pursuits than the opposite sex, Expert Dickson has gained widespread fame as an internet celebrity. He has more than 73,000 followers on his Facebook page and is in demand from brands who want him to promote their products.

But what of Yuen Man-tai, the man behind Expert Dickson, or perhaps even his alter ego?

“I enjoy tasks related to writing,” says Yuen. Both on screen as Expert Dickson and in person, Yuen comes across as a shy introvert. But he expresses himself passionately through his writing.

Given his love for writing, it is no surprise that he studied Chinese at Lingnan University, and his first job after graduating was as a Chinese language teaching assistant at a secondary school.

Teaching, however, did not suit Yuen. Like Dickson, Yuen lacks confidence when speaking in front of a large group of people.

“From the first day of work until the last lesson, I was always panicking,” he recalls. Even now, Yuen says his heart starts beating rapidly when he has to address a crowd. When he has to conduct interviews in character as Expert Dickson alongside other 100Most artists, he is mostly silent and lets others do the talking.

Another reason he did not enjoy teaching was that he had to scold the students. While he was sympathetic to the students’ disregard for the rules, as a teacher he had to enforce them. So after a year on the job, he quit to find an editorial job where he could use his writing skills.

Yuen joined Sing Pao Daily News and worked as an editor for the horse racing pages. But he began to question his career prospects after seeing one of his 50-year-old colleagues failing to find another editing job. He realised that horse-racing news editors are not recognised as professionals.

He quit again and worked for a while at a production company before joining the editorial team at 100Most.

Yuen says he applied to 100Most because he thought it was the most forward-looking print media operation in town. Originally, his main duty was to generate content and to edit the photographs for the print magazine. He was responsible for a section about senior artists, and had to do everything from brainstorming ideas, to conducting the interviews and writing the stories.

After two weeks of work, the content manager, Jonathan Chui asked him to give the role of Expert Dickson a try. Acting was completely new to him.

“When I first entered this company, I had never thought of being an internet celebrity,” he says. “At that time, I agreed to play the role just because I wanted to give Jonathan a hand.”

Even now, Yuen is not sure why he was designated to be the character, but he guesses there are two reasons: his clothing and the way he speaks. During his job interview and for the first few days of work, he came to the office in a suit. This appearance gave off the aura of an “expert”.

“My colleagues found me strange for wearing a full suit to my job interview. But because I used to be a teaching assistant and had worked at a production house, I was used to dressing formally for work.”

As for the way he speaks, he can stumble over his words and says “er” a lot. Yuen thinks his inarticulate speech is also a reason he was assigned to playing the role of Expert Dickson.

Acting does not come easily to Yuen, like Dickson he is an introvert. He also finds it difficult to remember his lines, especially when they are long.

“When you cannot memorise the script, you have to NG (no good), which hinders the shooting process.”

Although he is still afraid of acting before the camera, he thinks he has improved compared to his first appearance in an advertisement where he played a worker at McDonald’s, the fast-food restaurant chain. At that time, he panicked. He was anxious because he was unfamiliar with what he had to do. He was unclear about his instructions, and he worried that he would be scolded for doing something wrong.

While he still gets nervous before shoots, he now enjoys them. He says 100Most shoots are always full of laughter. When they shoot outdoors, he says it feels like a bunch of primary school students on a school picnic. When 100Most filmed their Lunar New year promotional video, Expert Dickson was assigned to play the monk Tang Sanzang in a parody of Journey to the West. He had to wear the monk’s costume and act on the street. This is definitely out of Yuen Man-tai’s comfort zone and puts him under pressure. But, at the same time, he enjoys it; it is a perk of being Expert Dickson.

Yuen says he does not go out of his way to seek more advertising jobs. Although he welcomes the work, what he would most like is more time for himself.

“I am not really keen on being a celebrity. More [advertisements] are good, but I will be tired. I do not want to affect my role as an editor.”

If Yuen had to choose between being a celebrity and an editor, he would definitely choose the latter option. He is clear that he prefers writing to acting, singing and dancing. He dreams of writing fiction and although Dickson is a love investment expert, Yuen does not want to limit himself to writing romance stories.

“I want to write fiction of all kinds,” he says.

But while he would like people to know him as Yuen Man-tai the writer, he knows that Dickson the love investment expert has given him an opportunity to showcase his writing to a much bigger audience. Before he acquired the Expert Dickson persona, Yuen opened a Facebook page to share his writing but it only had a small readership. So he began posting his work on the Hong Kong Golden Forum – this did attract more readers to his page but even so, he only acquired around 800 likes over five years. The page, which includes earlier posts of short stories and Yuen’s musings on life, now has more than 5,000 likes.

The Expert Dickson fan page has around 14 times more likes and Yuen is grateful that the persona has brought him such a big readership. What Dickson says and does in the videos are created by the production team, but all the posts on his Facebook page are created and written solely by Yuen himself.

“That’s why I need not worry people will question whether Expert Dickson and Yuen Man-tai are different. They are the same person.”

Yuen mainly writes about his views and opinions on issues such as love affairs and the news. Often the views and experiences he describes match those of Expert Dickson. For example, Yuen sometimes writes about how he would like to have a girlfriend. This is also a wish that Dickson has expressed. Neither of them have been in a romantic relationship.

Ultimately, Yuen hopes his audience will be interested in what Yuen Man-tai writes and thinks.

“If people know me only because of the popularity of Expert Dickson, I will be quite disappointed. But if they know Expert Dickson and thinks his views are quite meaningful, and that his views are close to their own, then that would be something else altogether,” says Yuen.

He foresees that Expert Dickson’s star will begin to wane, and predicts his popularity will last for a year and a half at most. His fame is a stroke of luck, he says, and he hopes people can focus on his writing.

“When you are enjoying good fortune, you have to let people know your strengths so, when adversity comes, you can carry on and they will not be so disappointed,” he says.