Pang Wei-sum, 48, who is in charge of a community elderly services centre in Sha Tin has a different perspective on what receiving these small gifts means to the elderly. She says that to the elderly, the gifts reflect a concern for their welfare

“They really cherish these little presents. The feeling of being cared for is concrete.”

Pang is surprised by the anti-elderly pages on Facebook. Behind the irony and satire, she thinks the posts are disrespectful and for her, the saddest thing is that the elderly being mocked are exactly those who most need society’s help.

Pang categorises the elderly into two groups: the younger elderly (aged around the 60s to 70s) and older elderly (aged over 80). The younger ones are more educated and tend to have a better social status, since they are still in good health and can help out in households. However, the older ones often feel ignored when their grandchildren grow up.

“You shouldn’t just respect someone because of their economic value. You should also respect them when they are old, alone and weak,” says Pang.

Pang believes the animosity between generations reflects Hong Kong’s polarised society. People are categorising themselves as belonging to different factions and oppose those who hold different views in order to justify their own.

She thinks both the young and the old are labelling each other and discriminating against each other in a self-centred way. This will only lead to more opposition and boundaries.

While it may be unrealistic to expect either side to agree with the other, empathy and understanding are possible. Helen Ng Wun-lam has been taking part in protests since joining the anti-National Education demonstrations in 2012. At 17, she is not yet old enough to vote. But she thought she could fulfil her civic duty by helping out in election campaigns.

Ng remembers a conversation she had with a 70-year-old woman while she was campaigning for localist candidates.

“She told me she was worried that social movements could escalate into war between the people and the government. She had experienced war, and she said it was very bitter,” Ng recalls.

After putting herself in their shoes, Ng says she can see why the elderly wish youngsters could just settle down.

“At their age, after working for most of their lives, you would wish to live a peaceful life for the rest of your years,” she says.

Ultimately, Ng thinks people are selfish – the elderly want a peaceful life and the young want to fight for their ideal future. The important thing is to keep communicating and trying to reach out, she says. After all, the old were once young and today’s young people will be old one day. 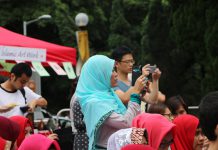