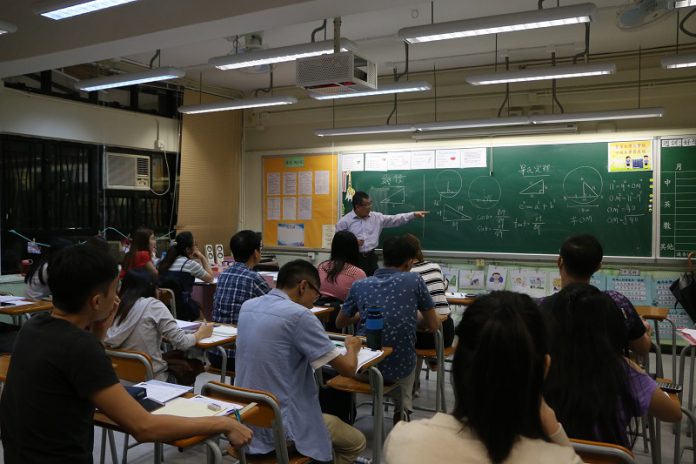 Once a thriving alternative to day schools, evening schools now struggle to survive

When the sun sets and workers pack into buses and trains for the journey home after a long day at work, students at evening schools hunker down for their classes. They come from diverse backgrounds – some have day jobs and some are fresh out of conventional schools.

Although they have been in decline since the 1990s, evening schools were very popular up until the 1980s. In the 1950s, the arrival of large numbers of young refugees from the Chinese Civil War overloaded Hong Kong’s education system. The government and some non-profit-making organisations set up evening schools to satisfy the demand for schooling in the absence of free universal education.

There were two main kinds of evening schools. The first taught the conventional secondary school curriculum, while the others aimed to provide education opportunities for young workers.

Paul Yeung Siu-Hung, 62, co-founded the New Youth Study Society (新青學社) in 1977 with his college mates after graduation. It became well-known as the “workers’ evening school”.

At that time, only 60 per cent of students could enter secondary schools, while the rest worked as apprentices or child workers. Many of them were exploited because of their low education level.

Yeung and his friends hoped to empower these young workers through education. They taught a tailor-made, three-year course which included conventional subjects such as Chinese, English and mathematics, as well as industrial safety, the labour law and healthy eating to cater to workers’ needs.

Each founder invested HK$100 a month to rent a two-roomed flat in Tsuen Wan, which they transformed into classrooms. They even made furniture and donated books to set up a library corner. They promoted the school by posting street bills and attracted more than 20 workers in the beginning.

The government rolled out its policy of nine-years of universal education in the 1980s and this led to a sharp decline in new admissions. Finally, the New Youth Study Society closed seven years after it opened, in 1984. Yeung was content to accept the change. “We fulfilled our historic mission,” he says with a smile.

Ivy Yip Yuk-lan, 55, is studying Form five with her 18-year-old son at Holy Cross Lutheran Evening College in Tsuen Wan. Her son quit day school because he was bullied in Form Four. Yip, who completed a five-year evening school course 20 years ago, persuaded him to complete his secondary education in evening school. She hoped this will make it easier for him to find a job later.

At first, he refused because he had little incentive to study, but to encourage her son, Yip suggested studying together for three years so he would “not be alone”.

Her positive attitude worked and now mother and son study subjects such as biology and economics together. Yip is happy to be learning new things about subjects she has never studied before. She recalls the fun she had learning about enzymes in biology and gross domestic product (GDP) in economics. “If I do not learn new things, I will lose touch with society,” she says she always reminds herself.