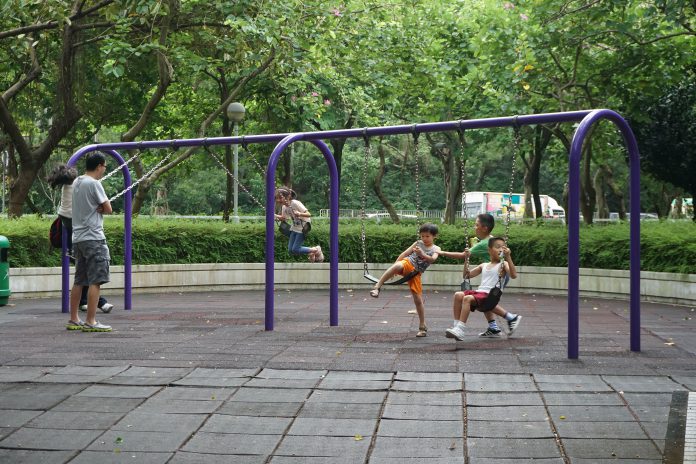 In the past few years, a wave of nostalgia has seen people flocking to take photographs of the few remaining old-style playgrounds in Hong Kong’s housing estates and equal numbers posting old photos of the playgrounds of the past on social media networks like Facebook and Instagram.

Adult Hongkongers may happily recall sliding down the chute of a long metal slide, bumping up and down on shaky seesaws, spinning around on merry-go-rounds, and flying through the air on swings, or scaling the heights of a climbing frame.

Yet in recent years, many of these structures have vanished, replaced by composite playground facilities, comprising colourful plastic components such as low slides, noughts-and-crosses games, steps, small tunnels and connecting bridges. While these facilities may look enticing, they are often criticised for lacking variety and make for a standardised play experience across playgrounds in the different districts of Hong Kong.

Mr Au has been bringing his 12-year-old daughter to the Victoria Park playground in Causeway Bay for years. He thinks that after the playground was refurbished, the slides are too short and there are not enough challenging climbing facilities for children.

“All the play facilities are too low. [The children] used to climb higher, and their bravery and courage could be cultivated,” he says.

Across the harbour in the Kowloon Park playground, Mrs Lam watches as her five-year-old daughter plays on the slides.

“It’s safe enough here,” she says. “But it’s lacking in variety, it’s all just slides. The rope nets, the merry-go-rounds and swings, there aren’t any of those any more.” Mrs Lam says children could learn and practise their physical coordination and balance skills on the old playground equipment.

According to a study by Playright Children’s Play Association carried out in 2015, Hong Kong’s playgrounds are too boring for most children. The group recorded videos of five children’s playgrounds over four days in August of that year. After studying 600 minutes of video footage, the group found there were barely any children using the playground facilities a quarter of the time.

Chung Yiu-bun, a lecturer in the Department of Psychology at the Education University of Hong Kong, is worried that the lack of diversity in playgrounds will have adverse effects on children’s mental and physical development.

Chung believes that a playground should be a site for children to learn and practise social interaction.

“How they play with other children of different ages and how they interact with adults are all important in the learning process,” says Chung, who adds that play fosters children’s emotional learning in a way that cannot be taught during lessons.

Not only have the playgrounds become less fun and diverse, but they are also subject to more restrictions and limitations. Signs can be found in public playgrounds prohibiting cycling, skateboarding, making loud noises, playing music or lying on benches. Staff are sometimes seen telling children off for playing ball games and even for running. The rules are enforced to ensure playground safety but they have a dampener effect on free play and fun.

Chung recounts an incident where he and his son were playing around with a football in a grassy open space at a public tennis court. Although they were not in anybody’s way, a security guard came over and stopped them.

“I was quite angry at the time, we weren’t actually playing a football match. The strict, rigid rule that only certain activities are permitted in a certain place is just so weird,” says Chung. “This deters people from making use of the public space and playgrounds.”

He says it is important for all stakeholders, including parents and children as well as the government, to have input and reach a consensus on how playgrounds are designed. Otherwise, children will lose interest in going to playgrounds altogether.

The Leisure and Cultural Service Department is responsible for the design and management of children’s playgrounds at more than 630 venues throughout Hong Kong. Paul Chan Yuen-king, Programme Leader of Landscape Architecture at the Technological and Higher Education Institute of Hong Kong, says the management-oriented administration of playgrounds restricts creativity and imagination.

He says the LCSD’s power in deciding what can and cannot be allowed creates a vicious cycle. A designer is not allowed to include certain elements and the playground or park prohibits users from engaging in certain activities because the design of the playground does not cater to it. He takes cycling as an example: “All parks forbid cycling now, it is so ridiculous that you need to get off your bicycle when you pass through a park while cycling,” he says.

When it comes to the design and use of space in playgrounds, Chan says Hong Kong lags far behind other advanced cities. For example, playgrounds in western countries combine the playground designs with the natural landscape, for instance slides are incorporated into the landscape.

“Actually [Hong Kong playgrounds] don’t have much creativity, they want all [playgrounds] to be simple and easily managed,” he adds.

Children are even forced to play only within a playground’s boundary. “They draw a boundary and set a space that is called the playground and it is covered with soft mats. When you’re outside of that boundary, you’re not supposed to play.”

On the bright side, the LCSD is planning a new and innovative playground in Tuen Mun Park that is slated to open next year. It co-organised the Inclusive Play Space Design Ideas Competition for the 5,000-square-metre area in 2016 and invited public participation in the design.

The new playground space includes more exciting and diverse elements including sand and water play and equipment that sways and spins, as well climbing frames and movable parts for knocking and touching. However, in the process of executing the winning concept, a lot of compromises still have to be made due to many safety considerations.

In the meantime, some community organisations are working hard to create attractive and engaging playground spaces for local children.

Playright Play Association, the group which carried out the survey on the city’s playgrounds, is a local organisation that stresses the importance of play for children’s growth. It organises regular activities in public spaces which encourage children to use their own imagination when they play. Last year, the group organised a nine-day community-based playground along the Central and Western District Promenade. Children could pile up bricks, cardboard and tyres however they wanted to create their own ideal playground on the lawn.

In September 2016, several NGOs – the Des Voeux Road Central , Clean Air Network and the Hong Kong Public Space Initiative – succeeded in getting permission to close a section of Des Voeux Road in Central to traffic on a Sunday afternoon.

More than 40 groups held different activities in the area, including structure building, musical performances, dance and play, to turn the area into a playground for all. One of the organisers, Winnie Tse of the Clean Air Network, thinks playing spaces should not be limited to parks. “Children in the past played anywhere they wanted on the street,” says Tse.

In the grassroots neighbourhood of  To Kwan Wan, a local organisation called Play Depot invited children to design their own toys and play space. They invited six groups of artists to join the project in various workshops held this Spring. One of the artists taught kids to utilise unused wood and bamboo to make percussion instruments, like the cajon, using simple tools and woodcraft. Another group used materials that are commonly found in To Kwa Wan, like car tyres and bamboo, to make installation art and games.

After the workshops, an exhibition and a playground was created in the Cattle Depot Artist Village, which was open to the public. Children raced on dinosaur cars made out of car tyres and climbed up and down wooden installations such as stairs and observation towers.

Unlike at ordinary playgrounds, there were no prohibition notices at Play Depot. Alex Tam, the organisation’s executive director says they did not want to “object” to anything. Rather, they hoped users would spontaneously help maintain a harmonious play environment.

“It was not us who solely operated Play Depot, I hope to let people know that it was we and the community who created and maintained such a playground together,” says Tam.