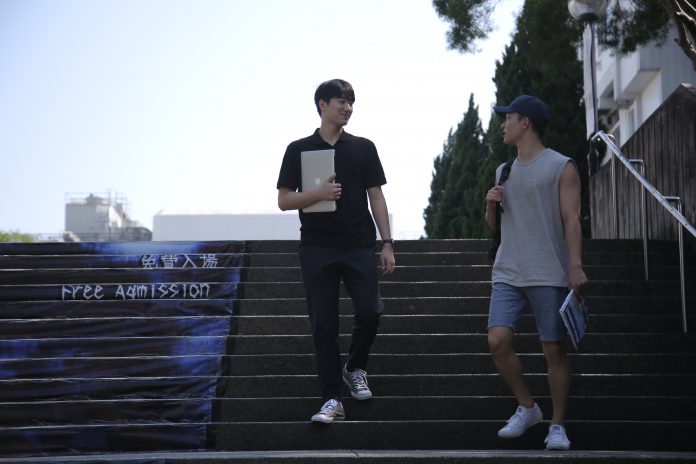 When he first arrived in Hong Kong as the only Korean student in his cohort of 92 students in the undergraduate computer science programme at the Hong Kong Polytechnic University (PolyU), James Kim Nam Hyuk felt very lost. He only had limited contact with people from Hong Kong and found it hard to adapt to his new environment.

But soon, at the residence hall where he lived, local students dropped by, greeted him with smiles and struck up conversations. He ended up making good friends and began to enjoy his life as an international student in Hong Kong.

“They were very friendly to Korean people… I was very thankful about it,” he says.

Chung Peichi is an associate professor from the Department of Cultural and Religious Studies at the Chinese University of Hong Kong (CUHK) and is conducting research on Korean popular culture. She explains one of the reasons Korean students are choosing to study in Hong Kong is because Koreans are fond of Hong Kong popular culture and films. They also see Hong Kong as an international city that has close ties to China.

“Here, you can have people to access Chinese, English, and Cantonese. I think that gives a very good impression [that] if parents send their kids here for education, they get to learn many different things,” says Chung. She adds many Korean parents who choose to send their children to Hong Kong for university do so with an eye on accessing the markets and opportunities in mainland China.

Kim Jeehoon, a third-year student in the Integrated Bachelor of Business Administration Programme at CUHK, agrees. Kim says Hong Kong is an Asian financial hub and he thinks he will have more opportunities after graduating here than his friends studying in the United States will.

“Their path is set only to the one route. All the business students are preparing for the AICPA (American Institute of Certified Public Accountants) and getting into the big four [accounting firms] says Kim. “But in Hong Kong, you can find various other fields in finance, accounting and consulting. So that was very intriguing for me.”

Even if Kim cannot find a job in Hong Kong after he graduates, he believes that studying in Hong Kong still has its advantages due to the growth in economic ties between South Korea and China. Kim is now taking Mandarin courses at university as he believes that being able to speak Chinese will be a plus when it comes to job hunting.

Kim also suggests another reason why more and more Korean students are coming to Hong Kong for tertiary education – the ranking of local institutions. He says Koreans really care about rankings and Korean newspapers like Korea Joongang Daily, started covering stories on QS World University Rankings, especially on Asian universities rankings, in around 2012. At that time, universities in Hong Kong ranked highly among other Asian universities. For example, the University of Hong Kong was ranked second in Asia in 2013.

Costs are another factor. Maria Cho Young Eun, who is in her third year of study at the Department of Comparative Literature at the University of Hong Kong (HKU), previously spent a year studying at a liberal arts college in the United States. When her parents were unable to afford the tuition fee in the United States, she made a sudden decision to come to Hong Kong because it was cheaper and it was already too late to apply for universities in South Korea.

Now, Cho regrets that decision. She says she had expected Hong Kong to be very international, but she found it fell short of her expectations because she cannot make any close local friends.

“I feel left out when they [local students] speak in Cantonese or Mandarin because I don’t speak any of those languages,” says Cho. “I still made some friends within our department and I still talk to them during lecture times, but then I never really hang out with them during my leisure time.”

Kim Sojung, an assistant professor at the School of Journalism and Communication at CUHK, who is also an academic advisor for the Korean students in the department, thinks the language barrier is a major problem for Korean students, no matter where they studied high school.

She says most of the Korean students in Hong Kong actually came here from China, where they were educated for some years in international schools. She thinks many of them speak Mandarin fluently as a second language, but not Cantonese.

Language is not the only issue. Like many Asian students, Koreans often hesitate to participate in class discussions because they feel pressured when speaking in public. Kim Sojung attributes this to educational and cultural influences.

“They [Korean students] used to be quiet before. They didn’t have much chance to participate in discussion,” she says. “Also, it is said that sometimes being quiet is like a virtue… So, that’s why probably they are not used to it.”

Maria Cho can relate to that. She is glad there are only three to four Korean students in her department, so she does not have to feel any kind of peer pressure from other Korean students when she behaves more “internationally” and is more active during classes.

Still, she thinks the learning environment in Hong Kong is very different to the United States. At the liberal arts college she attended, there were around 30 students at lectures, but there are upwards of 100 and even as many as 300 in HKU. “You can’t be academically engaged or motivated or inspired or fascinated when you are just one of a hundred people in the lecture,” says Cho. “And if you are just one of the hundred people, then of course the professor is not going to know whether you do the readings or not.”

Cho says she always did the readings when she was in the United States but she tends not to at HKU because they do not hold discussions during lectures. If there was any discussion it was only for about 15 minutes during tutorials.

Apart from academic issues, Cho is also unhappy about accommodation arrangements. She lived in a residential hall at HKU in her first year but in her second year, she had to be interviewed by other students to decide whether she could carry on living in the accommodation. They asked her questions like whether she got along with local friends living on her floor and even asked her to list their Chinese and English names and their room numbers.

“I got really nervous and I thought the interview was really intense,” says Cho. “And it’s not really respecting international students.”

In the end, she was rejected and had to rent a place off-campus, which did not go well. “I don’t get why they consider GPA or hall activities such a big factor that determines whether you get into the hall or not,” says Cho. “Whether you have accommodation provided for you in Hong Kong or not should be the first factor considered.”

For male Korean students, returning to their studies after serving their national military service may sometimes present challenges. PolyU student James Kim says they normally return to South Korea to serve at least 21 months of military service after their second year of university.

As an academic advisor to Korean students, Kim Sojung hopes they can approach their teachers if they encounter problems, even if they have other sources of support, like the Korean student associations on campus.

“I can be a teacher and a friend,” she says, adding that they can also be mentors since they have more experience of life.

“I totally understand how Korean students feel stressed about language barriers or some of the unfamiliar culture. Without the family support, hopefully, they approach [me] more often and have a chance to talk more often.”

With the popularity of all things Korean in Hong Kong in the wake of the Korean Wave, Hongkongers are generally welcoming to Koreans. But cultural studies professor Chung Peichi thinks the government, universities and society at large could do more to encourage greater communication and provide more support. She thinks this would encourage more Koreans to choose to come to Hong Kong.

“I think it is good for people from many other places to come to Hong Kong.” says Chung of Chinese University, “It will bring different kinds of stimulation.” Whether they came as tourists, students or for other reasons, overseas visitors would enrich Hong Kong, she says.