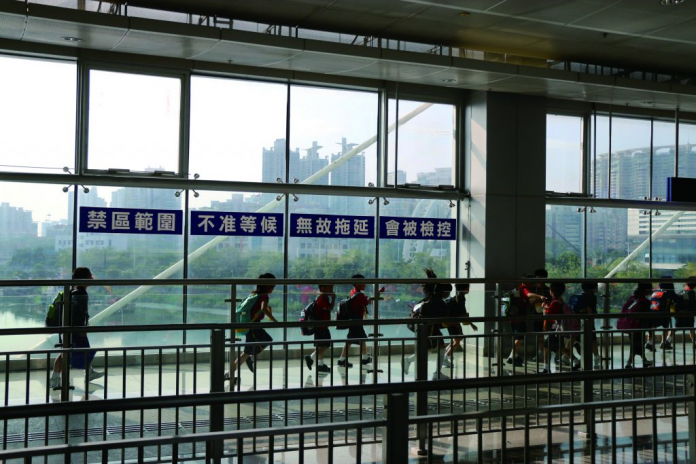 Every Sunday afternoon, 10-year-old Zheng leaves a children’s home in Lok Fu to reunite with his maternal aunt, Wai (who does not want to disclose her full name) for the day. The 56-year-old became Zheng’s legal guardian in Hong Kong when his parents, who both live in Shenzhen, left the boy with with her in 2012 when he started Primary One.

In early October, Wai sent Zheng to the children’s home operated by the Social Welfare Department. “I have no choice. How can I take care of Zheng alone?” says Wai, who is hearing-impaired and uses sign language to talk to Zheng.

Zheng is the Hong Kong-born child of mainland parents. He has the right to permanent residency in Hong Kong but his parents do not. His mother visits once a month.

Wai says that without his parents by his side, Zheng sometimes acts out and has had behaviour problems at school. Last year, he was caught stealing two mobile phones from his classmates.

“I hope Zheng can fix his behaviour [problems] in the children’s home,” says Wai.

For Zheng, the children’s home is still a strange new environment. “The ‘aunties’ working there help me more with dictation exercises,” he says.“But they only allow us to play computer games for 20 minutes every day.”

Many children like Zheng – who are often referred to as anchor children – have difficulties finding caretakers and homes. While the children can live in Hong Kong, attend local schools and access local services, their parents cannot take care of them here. More than 170,000 of the babies born in Hong Kong from 2001 to 2011 were anchor babies. The Hong Kong government introduced a “zero quota” policy to stop birth tourism from the Mainland in 2013.

The birth of anchor babies led to the rise of cross-border students in Hong Kong’s northern New Territories. It also created a demand for foster services for anchor children. Online forums like 88db and 58.com are full of advertisements for foster family services, ranging from individual households to childcare companies.

Varsity reporters contacted some of the people advertising their services by posing as relatives of “Xiaomei” a four-year-old anchor girl living in Shenzhen.

Mrs Ho, a home-maker who lives on a Tin Shui Wai public housing estate, provides overnight hostel care for HK$9,000 per month. The fee covers three meals a day and all living expenses. She shows our reporters where the anchor child would live – a little room with a bunk bed, which is separated from the living room by wooden boards in the 600-square-feet apartment.

She says her husband, a construction worker, built the room in order to give the fostered child some privacy. Ho says she has previously taken care of a primary four anchor child, whose parents live in Huanggang. “If there is no Hong Kong residence for them [anchor children], they have to cross the boundary from the Mainland to Hong Kong to attend school every day,” she says. She adds that Tin Shui Wai is close to Shenzhen Bay, which makes it easier for the anchor children to return home for the school holidays.

“We will definitely treat her as my own child,” promises Ho. She says apart from daily childcare, all three members of her family would contribute to the growth of the anchor child. Her son, a second year university student, could help her with her homework and her husband would never smoke and drink in the home.

Ho also explained the benefits of using her address to apply for a school place for Xiaomei. In Hong Kong’s Primary One Admission System, children who are not admitted to their preferred schools in the initial points-based discretionary stage of allocation, will take part in the Central Allocation system. In this stage, children are placed in schools within their geographical school net. In recent years, some of the anchor children registered at mainland residential addresses were allocated school places in districts like Tuen Mun and Tung Chung, which are harder to access from the Mainland.

“Use my address, or else you will end up in disappointment and tears,” Ho says. She further suggests we let Xiaomei adjust to the local education system by enrolling her in a Hong Kong kindergarten.

Ho tells us that her family is an approved foster family and assures us of her credentials by showing us bank statements that show payments from the Social Welfare Department. However, the foster services she provided through the SWD were for daycare only and did not include overnight residential care.

It is not just grassroots families who want to earn some extra money that are providing private fostering services for anchor children. There are also middle-class people providing a more high-end service.

Leona Cheung, 52, is a private tutor who teaches Putonghua and Chinese literature to primary and secondary school students. She charges HK$13,000 to $16,000 per month for residential childcare. Her household is a three-bedroom Home Ownership Scheme flat in Yau Ma Tei that is finely decorated with Chinese calligraphy and paintings.

“I am not running short of money; I want to provide family care to people with similar education values,” says Cheung, who says she graduated from a university in Northeast China. When Varsity approached her, she insisted on having an in-depth talk with Xiaomei’s birth parents.

Cheung came to Hong Kong in 2000 on a one-way permit after marrying a Hong Kong businessman. She became a single mother in 2003 and her children are now at secondary school and university respectively.

She says that as a private tutor, she will pay attention to the academic performance of the fostered child. Her children, who play western classical and Chinese musical instruments, are additional selling points.

“Your kid can play piano and guzheng any time, while my son and daughter can be her private music teachers,” she says, pointing to the instruments in the room and the certificates on the wall. Her son can also teach Japanese and Spanish. “Hong Kong kids are good at everything,” she says.

Cheung also uses her background as a new immigrant and her native Putonghua to appeal to our reporters. “Many people may discriminate against anchor children. I, of course, will not,” she says.

She says she has previously fostered three anchor children, arranged through the charitable organisation Po Leung Kuk. Cheung adds the children only knew Putonghua and wrote in simplified Chinese when they arrived. “I taught them with patience and care,” she stresses.

Cheung takes the job seriously. She tells our reporters she would require them to appoint her to be the child’s only legal guardian in Hong Kong. By making the guardianship declaration in front of the Commissioner for Oaths under the Home Affairs Department, “I can share the same status as the birth parents,” she says. The child would then apply for schools with her address, which is one of the elite school networks, Yau Tsim Mong. She would also be able to sign her up for any school activities and sign her school handbook.

Barrister Michael Kung Kin-chung says that the “arrangement of guardianship is not that simple” and that the Home Affairs Department may investigate the relationship between the guardian and the child.

Kung says that even if they are guardians, childminders who are not licensed by the Social Welfare Department to provide foster care still risk being charged if accidents happen to the children. He says childminders would have sole responsibility for any harm that befalls the fostered children whose parents could launch a civil suit against them.

“Sure, childminders could apply for insurance; but insurance companies may not take them on because their activity is unofficial and unlicensed,” he says.

As for Mrs Ho from the Tin Shui Wai public housing estate, Kung says public housing tenants are required to notify the estate office of any household changes. Only residents listed on the tenancy agreement are allowed to live in public housing. Subletting, with or without rental income, as well as engaging in commercial activities are serious breaches of the tenancy agreement. Tenants may have their tenancies terminated and may be prosecuted by the Housing Authority.

Kung adds that applying for a primary school using the address of a paid guardian is the same as using a “borrowed” address. Those involved can be under suspicion of conspiracy to defraud.

Apart from paying for a foster family, mainland parents can also try to live with their children in Hong Kong by applying for a student visa. Agents call this method – where parents apply to local universities – “accompany studying”.

A Varsity reporter approached Care House-Integrated Family Service, a Shenzhen-based agency we found on WeChat, posing as a mainland mother who wanted to take care of her Hong Kong-born anchor child. The agency specialises in visa and immigration consulting services to parents of Hong Kong anchor children.

A staff member who said her surname was Ng and an education consultant of Care House strongly advised the reporter to buy the accompany studying package which costs Rmb$98,000 (HK$115,280). By applying for a full-time post-graduate degree at a Hong Kong university, the parents become eligible to stay in Hong Kong to take care of their children.

“To be honest, most of the parents are not interested in studying, they just want to get a visa and take care of their children themselves,” she says, adding that the majority of clients are mothers aged from 25 to 40.

“To be honest, most of the parents are not interested in studying, they just want to get a visa and take care of their children themselves”

Ng shared some tips. “We recommend most of our clients to study programmes conducted in Chinese, because their English proficiency level is not high,” she says, citing Chinese culture, Chinese language and tourism programmes as examples.

The accompany studying route does not end after the mother successfully enrols at a local university; she can bring the whole family to reside in Hong Kong.

“After you get the student visa, you can apply for dependant visas, which are for immediate family members like your husband and children,” Ng says.

She explains experts will look into the clients’ academic background and work experience and generate a list of suggested programmes and institutions. They will also assist clients by preparing CVs and conducting mock interviews. After she completes her degree, the mother can stay for one more year to get a job. If the client’s application to study in Hong Kong fails, the agency will return around 90 per cent of the commission fee.

The advertisement for the agency reads: “Hong Kong government banned expectant mothers from Mainland China from its hospital maternity wards starting from 2013. For the 180,000 anchor children born through birth tourism since 2001, what can their parents do?”

Ng says clients can still give birth to babies in Hong Kong and those babies will gain residency. “Pregnant women with travel permits cannot enter Hong Kong now,” says Ng, “but it is okay if you have a student visa.”

“Pregnant women with travel permits cannot enter Hong Kong now but it is okay if you have a student visa.”

The tactic is to be pregnant after June, when the application for student visas and school interviews usually take place, says Ng.